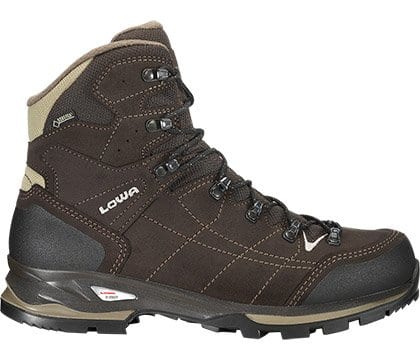 Over the years I have done my fair share of hiking in the mountains and the one thing I have found is that a comfortable pair of hiking boots can be the difference between utter joy and a long day of miserable pain. The Lowa Vantage GTX hiking boot is designed to keep your feet dry and comfortable while you are out exploring. I have been wearing the Lowa Vantage GTX boots during a variety of hikes and have been left without blisters or sore feet. Some of my boots in the past have taken weeks if not months to fully break in. Not the case for the Lowa Vantage GTX! From the very first step they felt great on my feet and only continued to improve as I wore them. If you’re looking for a solid pair of hiking boots as the hiking season starts continue reading about a boot that won’t disappoint. 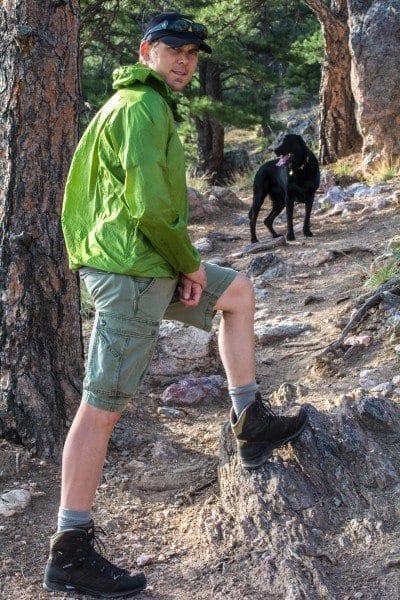 One thing for certain about the Lowa footwear company is they have spent a little bit of time refining their hiking boots; almost a 100 years to be exact! The Lowa footwear company was started in 1923 in Germany.  They still reside there today and continue to produce all their boots there as well. So when I put the Lowa Vantage GTX on my feet I had high expectations and they didn’t disappoint. Lowa markets the Vantage GTX as a trekking boot that can be used for day hikes up to backpacking trips that requires midweight loads (30-50lbs). 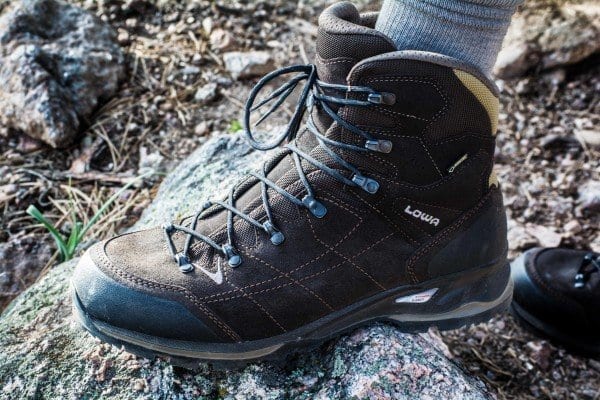 Performance of the Lowa Vantage GTX

When I first got the Lowa Vantage GTX I was surprised by how easy it was to slide my foot into them. The boots have a flex lacing system which only utilizes the lower third of the boot with thru eye holes. The C4 tongue has a generous amount of extra material giving you plenty of space, but not too much that would cause any discomfort or bulky feeling. The flex lace system is designed to reduce instep pressure and keep your foot snuggly in place without having to cinch the toes laces so tight. This is one area where I feel the boot did a great job. In the past with other boots while hiking downhill my feet start to slide forward and end up causing my toes to take a beating. With the Lowa flex lace system my feet stayed exactly in the same place even during some rather steep descents.

The laces are routed just right over the C4 tongue that offer the right amount of padding in key areas of the forefoot to prevent the laces from digging in even while flexing during a steep ascent. The boots come with thin laces that I thought would maybe cause some trouble, but to my surprise I never needed to double knot the laces during a couple of three plus hour hikes. 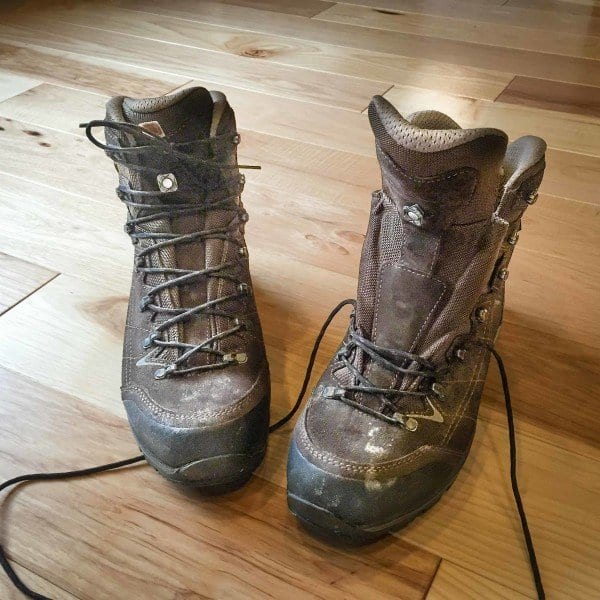 One thing that drives me crazy when I’m hiking is when tiny grains of sand or small rocks make their way into my boot. The C4 tongue of the boot is fully attached almost the entire length of the boot. This feature paired with Gore-Tex material also offers superior waterproofing. To test just how good the boots were I took them on a spring hike when the snow was starting to melt and stood in a few ice cold puddles. I’m not going to lie when I decided to stand in the puddles I was glad I wasn’t too far from the truck, because I thought for sure my feet were going to get wet and be freezing. Well not only did I not have a drop of water inside the boot, but my feet also stayed perfectly warm. So I have to say the Lowa picked a great combination of Gore-Tex and Cordura to keep your feet dry no matter the conditions. May has also been the month of rain here in Colorado and the waterproofing did a fantastic job in the rain and mud. 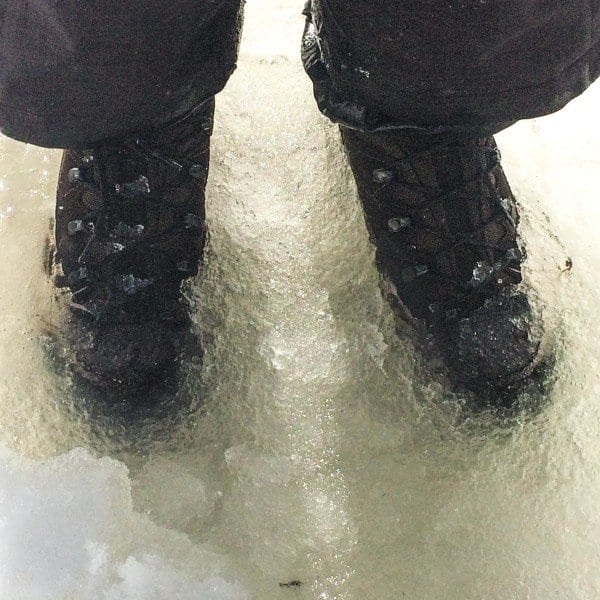 When you have been out hiking for a while your feet usually start to sweat which can lead to blisters, but the Lowa Vantage helps decrease this from happening with their climate control system. The Climate control system incorporates small perforation in the cuff of the boot and feeds off your natural walking motion to keep your feet dry. The perforations let air into the boot and the action stepping down creates a pumping effect that pushes the hot air out. This leads to cooler and drier feet with less blisters. I hiked in the cold and on some 70 plus degree days and never could complain about hot spots or overheating and I still have never got a blister from the Lowa Vantage GTX hiking boot.

If comfort is the most important part of a hiking boot than I would have to say the second most important feature is a good sole that offers adequate traction and grip. The Vantage GTX is equipped with the Lowa Trac Lite II sole. The Sole held nice and firm on a couple of rock scrambles when I was making a couple summit approaches. The sole has a little squish to it, which helps aid in traction. This could be an area for concern, but so far I haven’t seen any signs of wear on the sole. In general Lowa says you can get a good 5-7 years out of most of their boots. 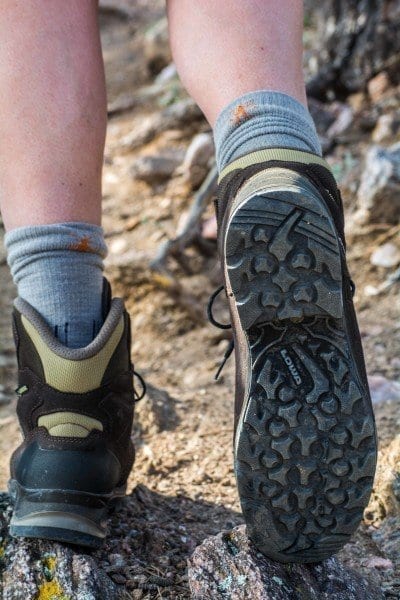 As far as stability goes the boots offer great flex in the ankle which leads to an enjoyable ascent and really feels at one with your foot. The boot however offers very little lateral flex helping prevent you from over pronating or supinating. The Lowa Vantage GTX offers a polyurethane midsole with SPS cushion and fluke technology. So what does that exactly mean? Well it means Lowa first uses polyurethane to mold the midsole, which holds up longer compared to other materials and prevents early breakdown of the sole. To prevent over pronating or supination Lowa uses TPU inserts in the midsole for added stability.

Lowa as a company prides itself in making not only lightweight hiking boots, but one durable boot. Most companies use an EVA midsole, but Lowa uses polyurethane in the midsole and the sole, while this leads to a more expensive boot it also gives you a durable more dependable boot that will give you years of enjoyment. Like I said earlier in the review the boots have shown little to no signs of wear since I have had them. I don’t think durability will ever be an issue with the Lowa Vantage GTX.

The Lowa Vantage GTX is a great all around hiking boot that will give you years of hiking enjoyment. If you are looking for a day hiker, but also a boot that can pull you through a weekend backpacking trip this is definitely a boot you should try out. The light weight of the boot will give you a little extra energy on those long hikes and the midsole will prevent you from having an issue with rolled ankles. For more information head on over to Lowa’s website to check out all the hiking boots they have to offer.  MRSP $245 www.lowaboots.com

Derick has always had a passion for the great outdoors. Winter is his favorite season and when he isn't working he is either skiing at a resort or touring the backcountry. Even though skiing is his go to sport, Derick also enjoys snowshoeing, cross country skiing, and hiking in the winter months. As the snow melts and winter fades you will find Derick exploring Colorado on his road or mountain bike. Derick is also passionate about fly fishing, camping, trail running and photography.