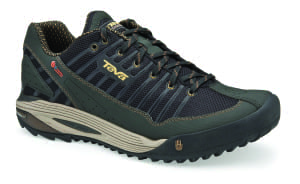 Typically, a shoe designed to do everything fails at doing anything well. It strives for mediocrity by being able to function passably at different types of activity. Teva just laid to rest this stereotype by creating a shoe that’s rugged enough to take on serious day hikes, stylish enough to wear out, and comfortable enough to go all day. The shoe is also laden with tech from the upper to the outsole. Most interesting is Teva’s new “eVent” fabric, which is used in the upper and sole of the shoe. It’s great for those of us who sweat quite bit during the day, as it releases moisture to keep your foot comfortable and dry. What was nice was that it kept us cool on hot days, and the lack of clamminess kept your foot warm on cooler days. It was extremely versatile. In order to tackle more rugged terrain, Teva added both a “shoc pad” in the inner sole, and an advanced rubber compound called “Spider365” to the outsole. We found the “shoc pad” to be nice and cushy on varying types of terrain; it kept us comfortable on days that tend to get a bit long. The “spider365” rubber really was extra grippy on all but the slickest of surfaces, and held firm even on flat rock and gravel. The bottom line – if you don’t know what life’s gonna throw at you today, at least you’ll know you’ll “have the right shoe for the job.” Read more at Teva.com.