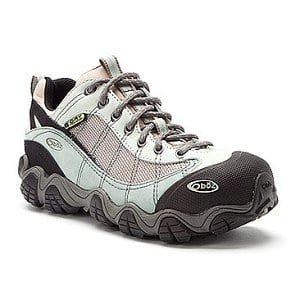 Obōz (pronounce it with a long “o”) is a cool little company out of Bozeman, Montana that takes their outdoor footwear seriously. The company was not one I was familiar with, so I couldn’t stop myself from poking around their website to see who they were and what they were all about – take a peek, there’s lots to look at. But what we’re after here is a review of their products, so let’s just jump right to it. 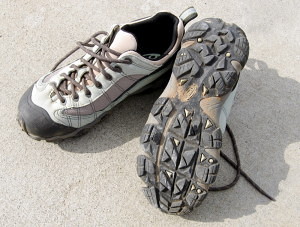 First, a quick rundown of the practical details. The women’s Obōz Firebrand II is a worthwhile investment to make in an all-around multi-sport shoe. It is made of waterproof nubuck leather, weighs in at less than two pounds, and retails for approximately $125. The shoe needed no breaking in, I slipped them on right out of the box and took off on the first of many adventures. I should note, the shoe runs true to size. There was no rubbing or uncomfortable binding anywhere on my feet while wearing the Firebrand II (read: no blisters!), and I found the shoe to have plenty of arch support, especially since I over-pronate when I walk and run and need as much support as I can get. As a bonus, I prefer a roomier toe box so I can wriggle my toes, and this shoe does not disappoint in that respect. Even better, the toe box is covered with a full rubber toe rand, saving the wear on the toe of the shoe (yes, I tend to kick and rub the toes of my shoes). I tug hard on the laces when I tie my shoes, and the eyelets stood their ground with the abuse I directed toward them. Oh, and lest I forget, the laces are superb, really. They are a thick weave that feels like it will last and last and last. While I typically am not fashion conscious, I must admit these shoes are as cute as they are functional – I was the envy of the other girls in my social circle.

I live in the Central Valley of California and have plenty of opportunities to hit up a variety of terrain, from flat wetlands, to oak woodland foothills, to granite peaks. Our higher peaks out west still have snow on them so I took off to explore lower elevations. Our first adventure was to a nature preserve on a river and wetlands with the kiddos. Spring has been extended out here with quite a bit of rain making everything muddy. The Firebrand II kept its traction on the slick mud and I could tromp through it all while everyone else around me tended to slip and skid on the mud. At the end of the day, it was a snap to hose off the mud and set the shoes out to dry before the next adventure. 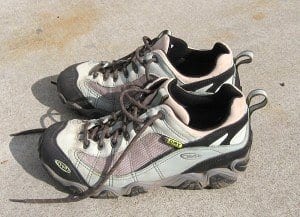 I prefer a high cut book for my hiking activities because I tend to roll my ankles when I walk…a lot. So, I was a bit skeptical to go back to using a low-cut shoe. However, I’m not going to lie and say I didn’t roll my ankle once wearing the Firebrand II. Of course I rolled my ankle on the uneven terrain, but what set this shoe apart from others was the severity, or lack thereof, of rolling my ankle and the recovery after. I have to complement the good folks at Obōz for making a very stable shoe that still maintains the comfort of a more casual sneaker. I rolled my ankle on some loose gravel, but the Firebrand II took the brunt of the instability so that I didn’t have to stop after rolling my ankle and could continue on right away with my hike. These shoes were so comfortable that I would use them on long day hikes, or even a quick overnight or light weekend backpacking trip.

Let’s talk multi-sport for a moment. When I think of multi-sport, I envision a shoe that can handle a variety of activities, and while the Firebrand II looks like a hiking shoe, what else can it do well? Most of the time I ride my mountain bike on easy graded roads in my neighborhood, as well as on asphalt that rides more like gravel, and is more rough than smooth. I don’t use clip less pedals and special biking shoes; rather I prefer a toe basket with the stock pedals. In the past I’ve used a shoe that is a bit more narrow in the toe box to fit comfortably in the basket. As I mentioned previously, the toe box is a bit more roomy in the Firebrand II and I was curious as to how well it would fit in the basket, and whether I would need to make adjustments. Needless to say, any concerns I had were quickly removed as the toe box fit comfortably in the basket. Entry and exit was smooth each time, and since I was riding with my young boys, we had quite a few stops and starts on our rides for me to test that aspect. Now that my boys are getting older, my goal is to start getting out on more challenging trails, even a few downhills, and I think this shoe will continue to perform well in any of those conditions.

I am also a runner, though I do most of my running on asphalt. There are not a lot of off-road trails in the neighborhood that allow me to test the performance of the Firebrand II as a trail running shoe. While the shoe is slightly heavier than other trail running specific shoes, in a pinch I think these shoes would handle well on shorter runs off road, though I wouldn’t recommend them for a daily run, nor do I think that was the designer’s intent when creating this shoe.

With all the rain we’ve had lately that I talked about earlier, and this being little league baseball season and all, I decided to test the waterproofing function during a downpour that lasted an hour while I was stuck outside cheering the team on. The Firebrand II was supremely comfortable and wearable in an urban setting. After the ball game I spent the remainder of the day running errands around town. While the motto at Obōz is “True to the Trail”, I’d recommend these shoes for exploring the wild places in the urban jungle because they are just that comfortable. The shoes kept my feet dry and toasty with no aches at the end of the day.

Some waterproof shoes have a lack of breathability, causing feet to sweat, but not so with the Firebrand II, which is a nice bonus after a long day of hiking. On one such hike, there were a couple of stream crossings I needed to manage. The larger of the streams had enough rocks that I could hop across, and the shoes had enough grip on the slick rocks. However, one shallow stream was too wide for me to leap across, and no rocks to hop, so I had to plow right through it. The water was cold snowmelt, but my feet stayed dry. The outer layer of the boot also dried rather quickly; another half-mile hike back to the car and the boots had quickly shed any significant wetness. I did a little digging on the Obōz website and found that they use something called BDry, which “is a proprietary membrane, laminated to the liner” of waterproof shoes, and provides breathability via vapor permeability outward, while being waterproof from the outside. Big words, but the end result is the stuff really works.

The bottom line…the women’s Obōz Firebrand II shoe is about both form and function, making it a complete package, whether trekking in the great outdoors or the urban jungle.