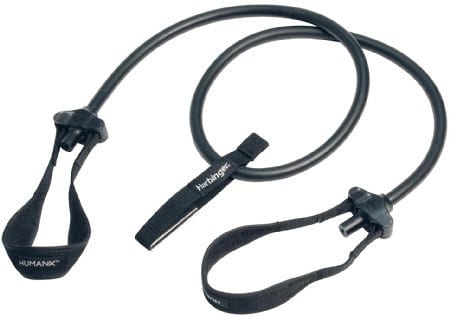 For almost 20 years I’ve been a faithful adherent to the simple calculus of weightlifting: The more weight you push (or pull), the stronger your muscles become. The equation is linear and transparent. And it’s as basic as the purpose for which our bodies can build muscle. You know, to move stuff.

Beyond its mathematical purity, there’s something gratifying about looking at a stack of iron and saying, “Yeah, I can push (or pull) that.” Sure, it’s a primitive measure of physical worth to think in terms of how many plates you can bench press or squat. But for those of us so inclined, the basic feat of moving heavy casts of metal over and over again for no reason other than to tear up muscle fibers is dazzling.

So, yes, I love the rudimentary physics of weight training. And I maintain an adolescent fascination with pushing around heavy stuff. I’ve consequently avoided – on principle – all weight training equipment that’s not made of iron.

I also spent a few weeks trying out two other Harbinger HumanX products. The Jump & Stretch Rope is a surprisingly versatile and useful addition to the home gym. The Competition X4 Speed Rope was fun for me to work with, though it served a niche role in my workouts; this product is best for those dedicated to jumping rope as a central part of their exercise programming. 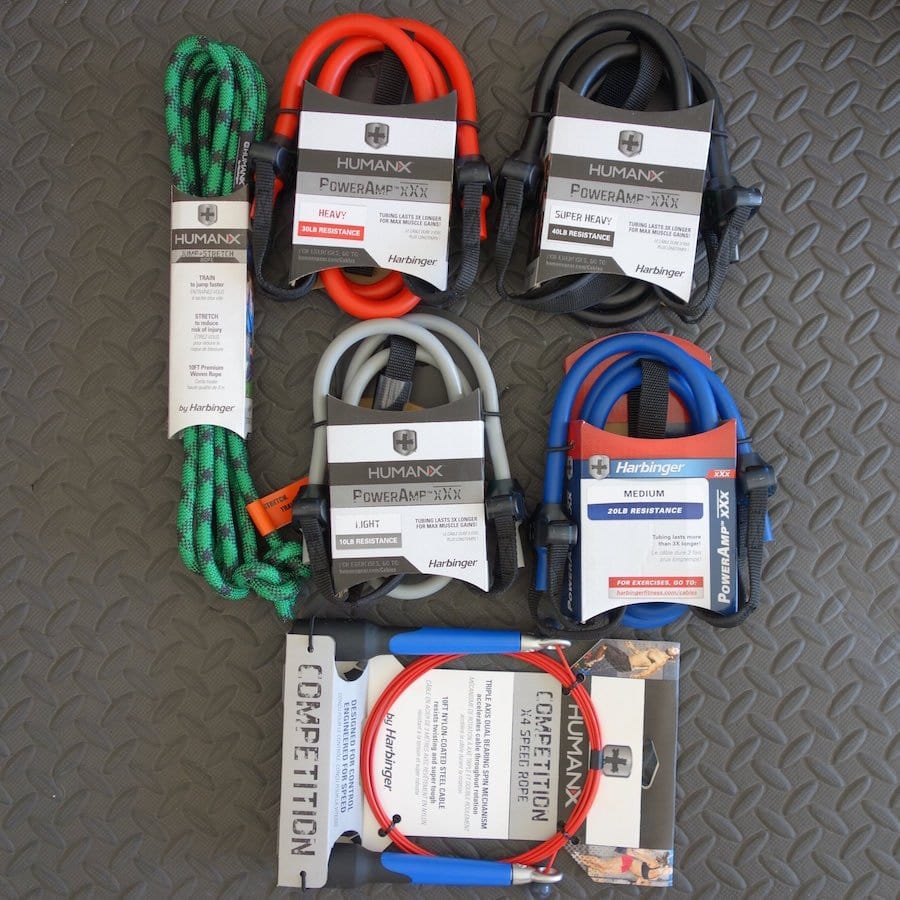 The HumanX gear I tried is high quality and helps complete a home gym setup for athletes interested in strength and agility training. 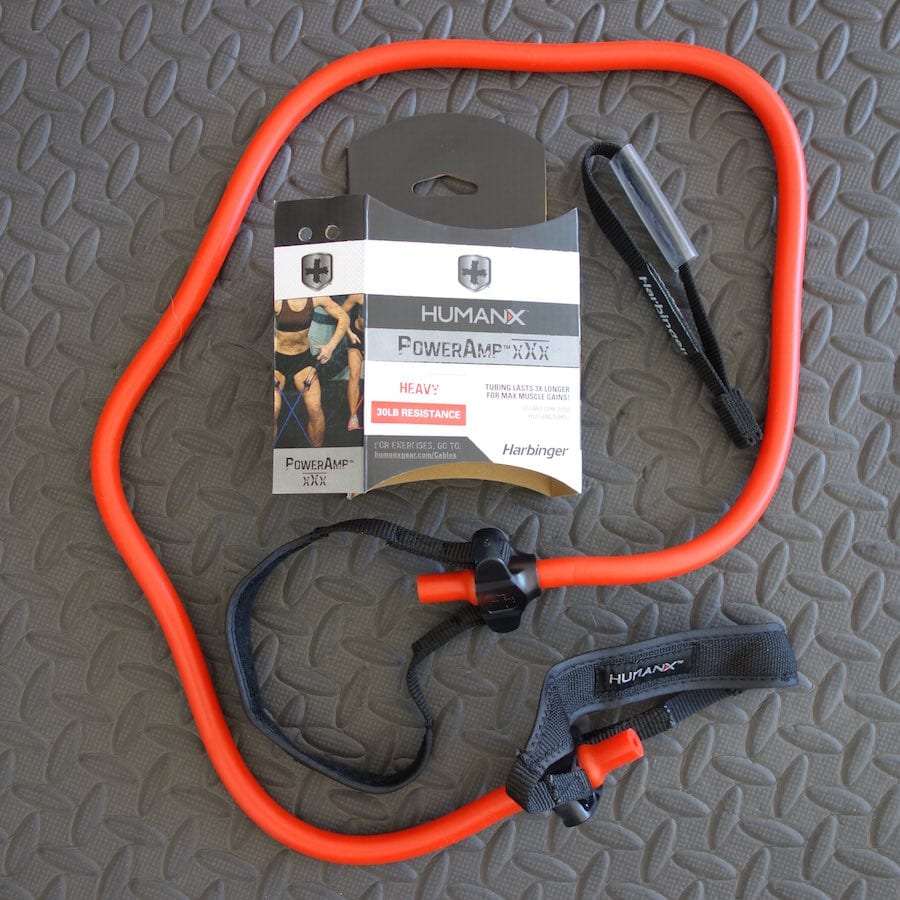 The cables are available in four resistance levels – 10 lbs., 20 lbs., 30 lbs., and 40 lbs. I’ve worked with all four. Although I am unfamiliar with how Harbinger determines each band’s resistance weight-equivalency, my testing suggests the ratings are approximately accurate.

I say “approximately” because the basic dynamics of weight training differ between dumbbells/barbells and resistance bands. Here’s a rundown of the difference. When you lift a conventional weight, the amount of force exerted to lift that weight differs at different phases of the lift. This is because the counterforce in weightlifting is imparted by gravity. So, when a weightlifting movement is perpendicular to the ground, the force exerted equals the weight of the dumbbell or barbell. But when a movement becomes something less than perpendicular, say at the very bottom or top of a biceps curl, the amount of force exerted is less than the weight. This phenomenon can allow a weightlifter to “cheat” by using momentum gained in the easier phases of the lift to move the weight with less effort through the harder phases of the lift.

With elastic bands, this kind of cheating is not possible. That’s because the bands don’t rely on gravity for counterforce. Instead, the bands provide greater levels of resistance as they approach their maximum length. They’re like rubber bands: easy to stretch at first, but increasingly difficult to stretch as they near their breaking point. 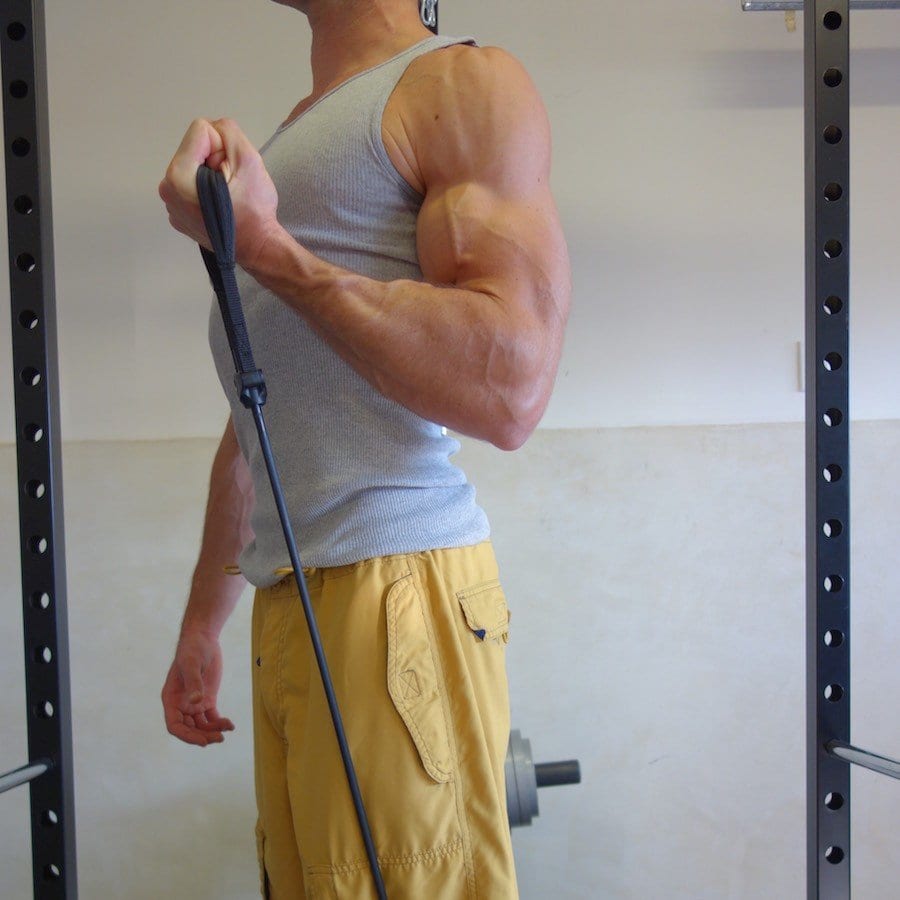 All of which means that resistance cables provide a somewhat different feel from traditional weights. So it’s difficult to say whether a band rated by HumanX at 20 lbs. really feels like 20 lbs. The ratings seem approximately correct to me through the majority of the travel ranges of the bands.

The difference between conventional weight and resistance band dynamics also means that resistance cables have a place in just about any serious weightlifter’s routine. This is because resistance cables impart a sort of discipline that enforces against “cheating” through the manipulation of lift angles. With cables, the angle of lift doesn’t matter. In fact, in some movements – like the biceps curl – the resistance imparted by the bands is greatest at the very top of the movement, the exact point where traditional weights provide least resistance.

This is good news because it means familiar movements can be enhanced with the incorporation of cables. The bands also seem to recruit different accessory muscles during movements to keep the bands stable. 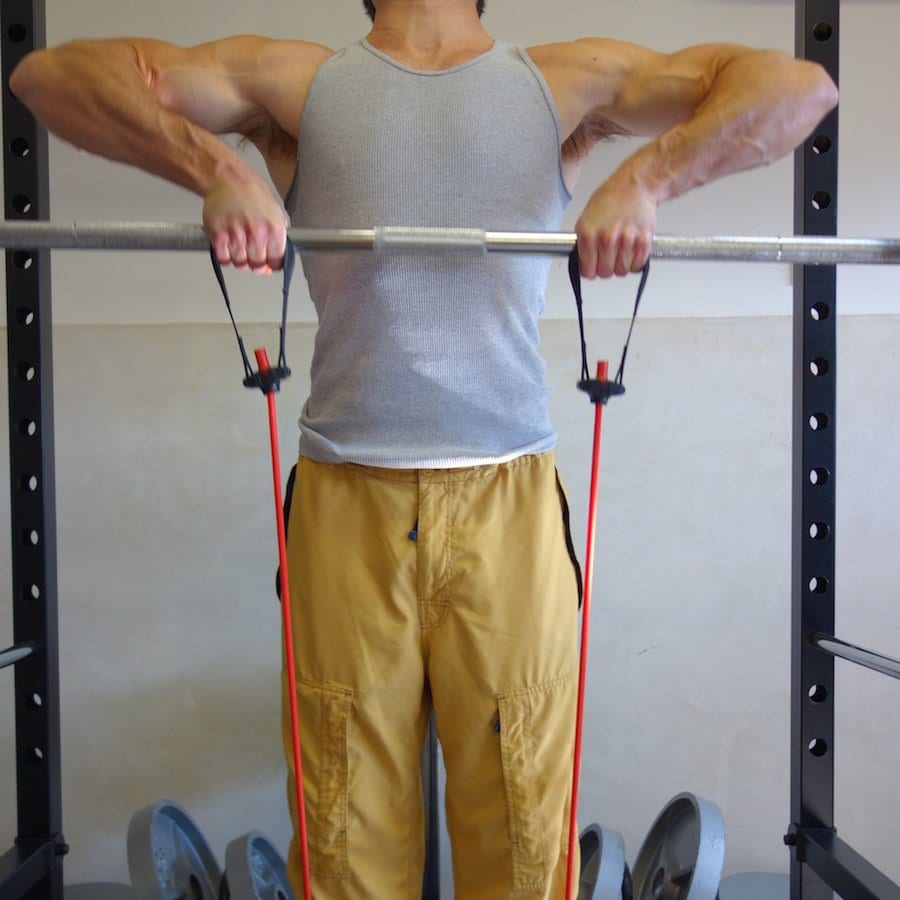 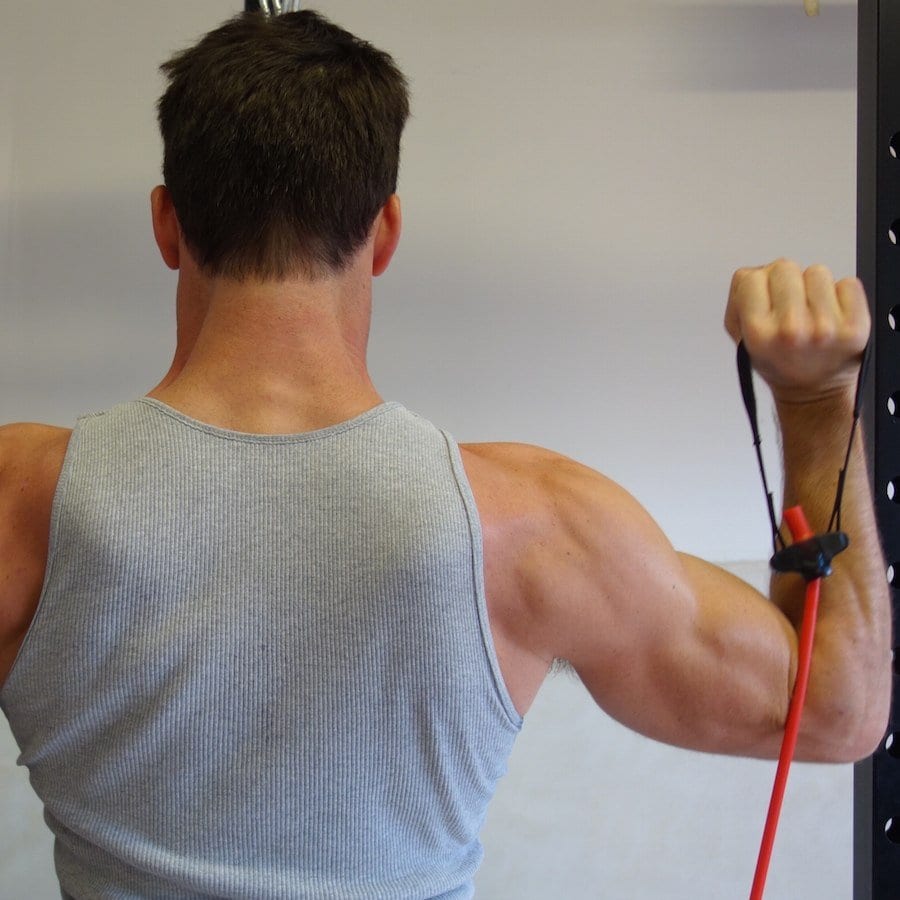 These cables are high quality, and I was confident they would not suddenly snap as lower-quality resistance bands can. For safety, the manufacturer advises that the cables be visually inspected for small tears before each use, but these bands also advertise they’re engineered to last 3 times longer than “standard” cables. My testing suggests this claim has merit since, long ago, while playing around with some resistance bands at a sporting goods store, I made fast work of inadvertently destroying a lower-quality cable. That experiment lasted only a few minutes; the HumanX cables have already lasted a few weeks.

The door jamb anchor is a nice feature, which I made use of for exercises like pectoral flyes and triceps pushdowns.

The HumanX Jump & Stretch Rope is a 10-foot length of premium woven rope, tied off in a loose knot at either end. Though not a visually impressive piece of equipment – after all, it’s nothing more than a length of rope that looks sort of like a heavy duty dog leash – I found the Jump & Stretch Rope to be quite useful in the gym. 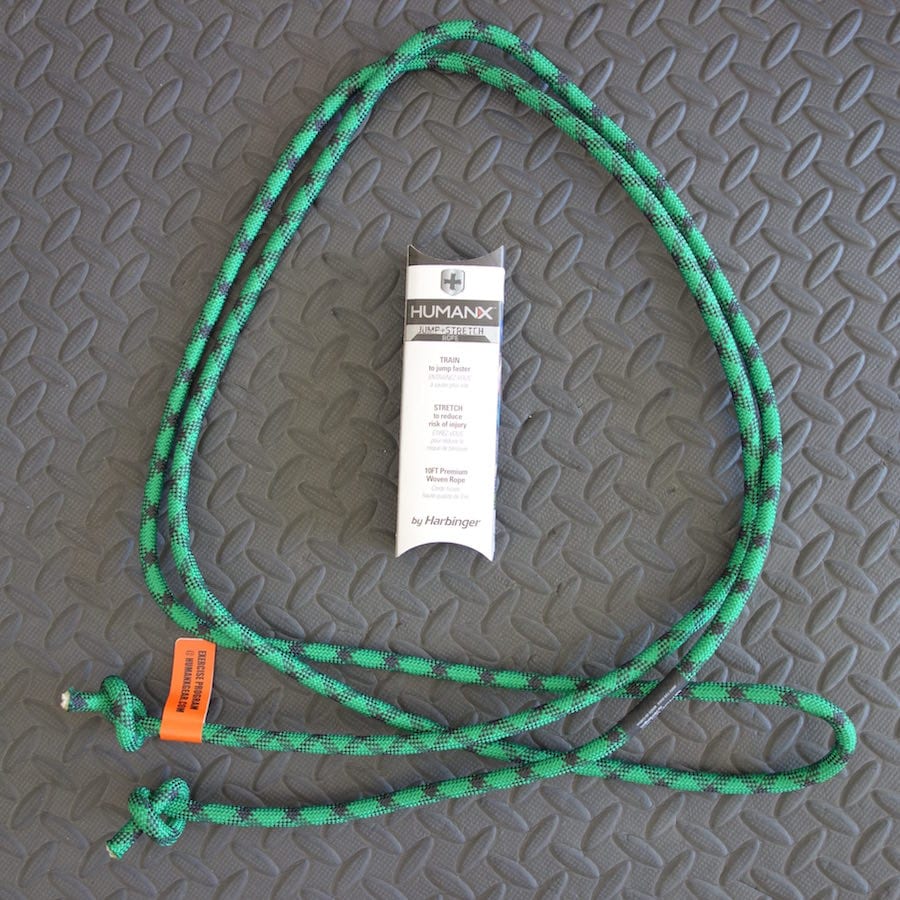 The Jump & Stretch Rope is meant to be a jumping tool (i.e., a jump rope), an agility tool (e.g., a ground ladder for footwork), and a stretch tool (sort of like a strap used in yoga, turned up to “macho”).

I tried the Jump & Stretch Rope for all three recommended uses. It was serviceable as a jump rope and agility trainer. But where I felt the rope really shined was for stretching. 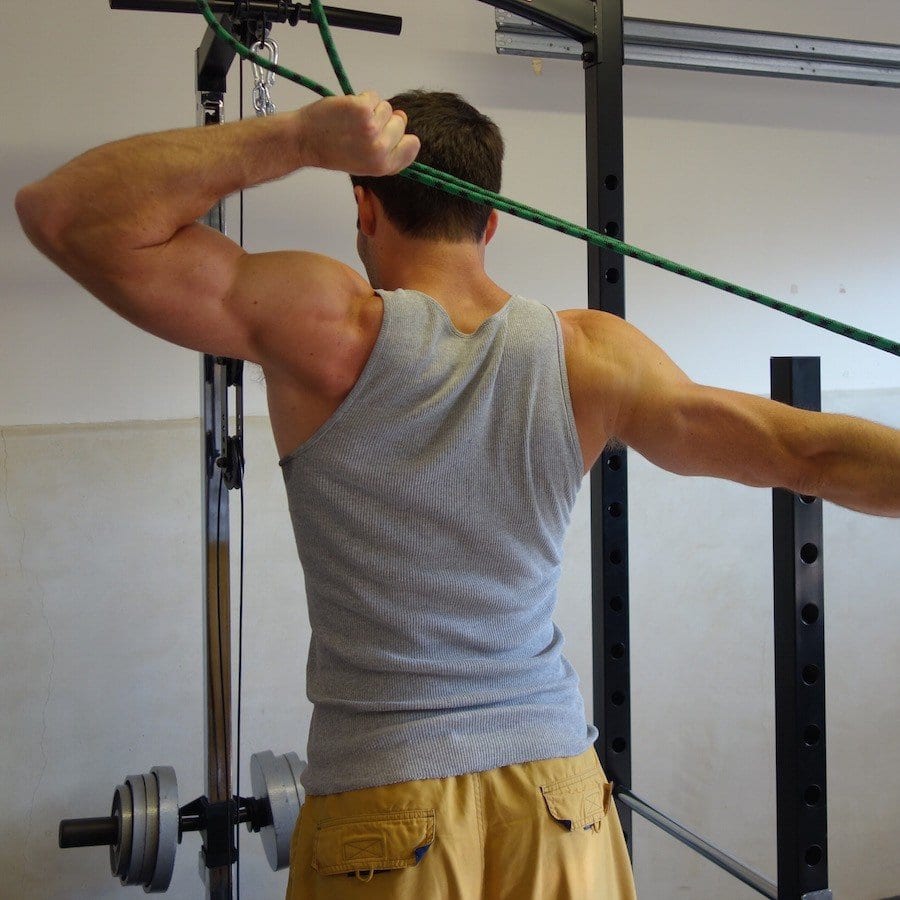 The HumanX Jump & Stretch Rope is particularly useful for stretching after a workout.

I’m relatively undisciplined when it comes to stretching and, following a weightlifting routine, I often just throw in a few upper body stretches on my way out of the gym. That usually sums to about 15 seconds a day. With the Jump & Stretch Rope, I had a physical reminder each time I finished a workout to actually, really, honestly stretch the muscles I’d just worked. If for no other reason than its ability to provoke stretching, the HumanX Jump & Stretch Rope can be a valuable part of a home gym.

The HumanX Competition X4 Speed Rope responds to the CrossFit craze that requires “double unders” in some of its training. A “double under” occurs when a jump rope travels two rotations during a single jump. They’re hard to do, regardless of whether you believe in their merits as a training movement or not. They’re especially hard to do with a jump rope that does not enable fast rotations. And they’re incredibly hard to do continuously in the absence of a dedicated speed rope. 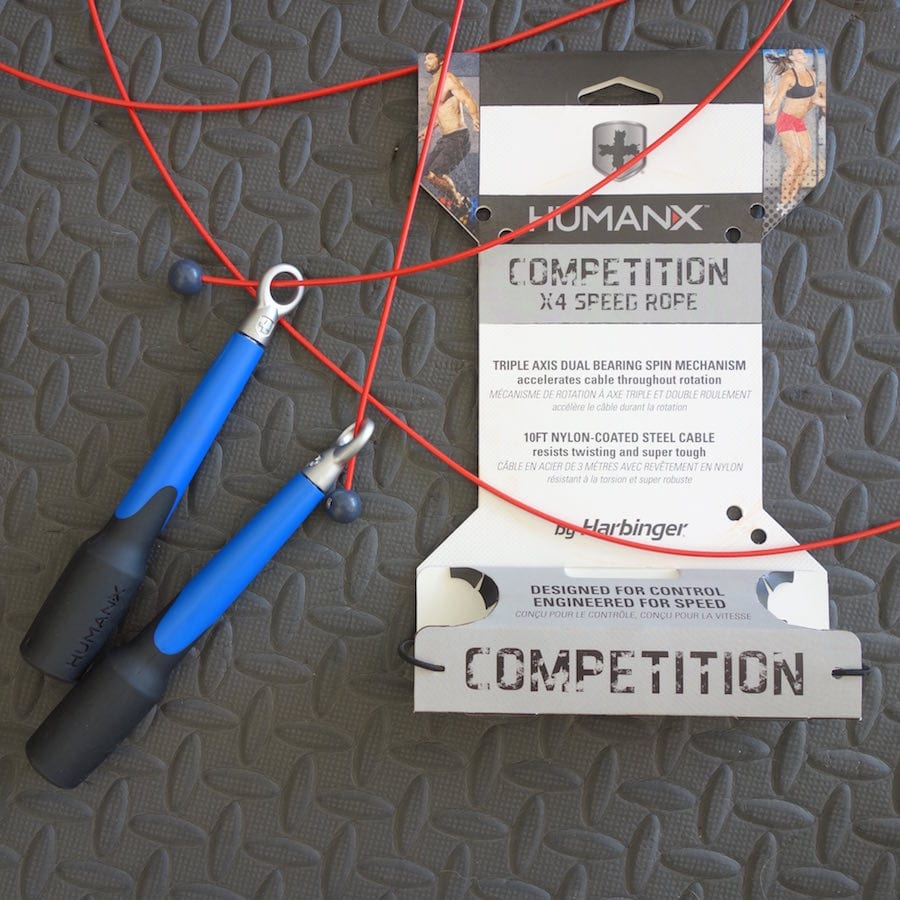 The HumanX Competition X4 Speed Rope is very lightweight and features a thin, nylon-coated steel cable that, when traveling fast enough for double unders, can moonlight as a medieval torture device. The speed of the cable is enhanced by a novel “Triple Axis Dual Bearing Spin Mechanism” that helps the cable accelerate smoothly throughout its rotation. So, while this may be a medieval torture device, it’s a high-tech one. 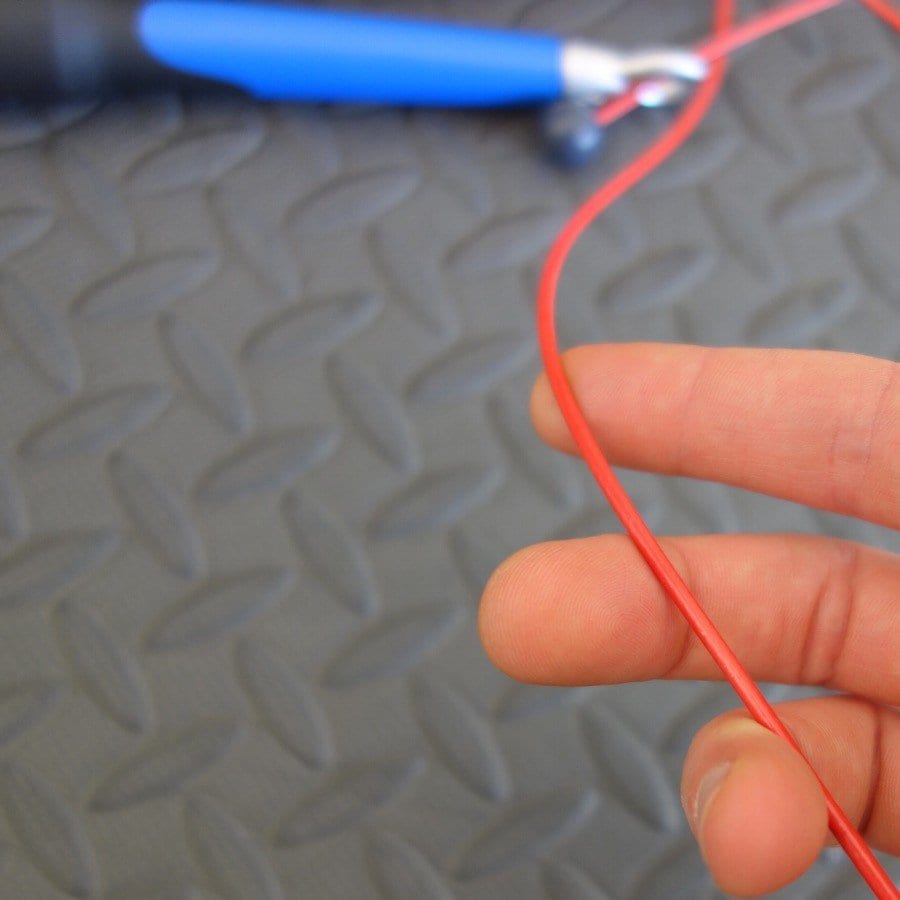 I found the HumanX Competition X4 Speed Rope capable of allowing even me – a so-so jumper – to consistently pull double unders.

One feature of the Competition X4 Speed Rope is that it can be tailored to user height. This is done by clipping the 10-foot cable to shorten the length between the handles and refastening the cable to the bearing mechanism. Although this feature is useful, it also has a downside in that the rope cannot be shared by two people of dissimilar heights. The rope will either work for me or my wife, but not both of us. 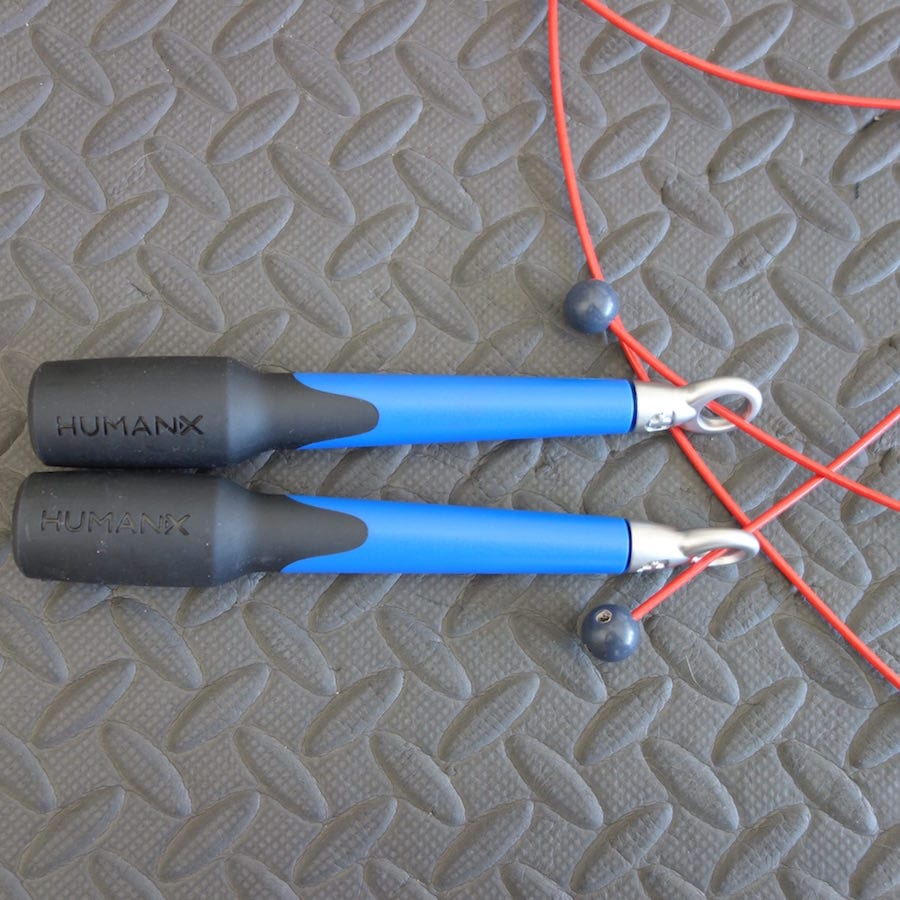 The HumanX Competition X4 Speed Rope can be tailored to user height.

The handles of the HumanX Competition X4 Speed Rope are ergonomically designed, lightweight, and comfortable to hold. They feel sturdy and allow good feedback during jumping.

Who the HumanX Line Is For

The products I tested from HumanX are uniformly good quality and functional. They would work well in the home gym of anyone training for strength and agility.