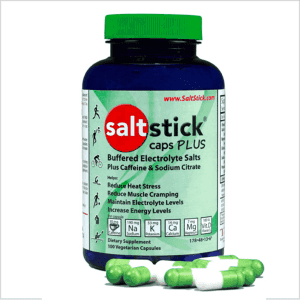 Cramps happen, but they shouldn’t.  At least not due to electrolyte loss or imbalance, when such an effective, easy-to-use product as SaltStick Caps Plus is available.

As an endurance athlete, I am well aware of the need to replace lost electrolytes during prolonged activities.  There are so many electrolyte products on the market today, that it can be difficult to differentiate.  And the reality is,  most are probably fine for the average athlete.  But if your endurance endeavors are a bit more serious than the occasional local race, consider this your secret weapon against heat stress, muscle cramping, electrolyte, and energy loss.  You’ll definitely want to make note of this high-quality, highly-absorbable supplement, and the advantages that SaltStick Caps Plus offers.

1. Its effectiveness has legs. Its creator, Jonathon Toker, Ph.D. , an organic chemist and former professional runner/triathlete, has continued to refine his proprietary blend of sodium, calcium, magnesium and potassium based on the most well-founded and current scientific studies. These findings have led him to develop a formula that not only closely resembles the electrolyte loss of athletes, but has also led to the several distinguishing elements that are missing from similar products. The sodium in SaltStick capsules is derived from sodium citrate, which has the added benefit of preventing stomach upset, a major concern of long distance athletes.  They also contain vitamin D to aid calcium absorption.  SaltStick Caps Plus is the first product of its kind to add caffeine to the mix, a known and legal performance enhancing supplement. Each capsule contains 30 mg., about the same as a 12 oz. can of diet coke.

2. Ease of use. The very distinctive, green, vegetarian-based capsules can be opened up and emptied into your water bottle, along with your choice of carbohydrate supplement (without effecting the taste), or they can be carried in capsule form and swallowed on the go.  (Note:  SaltStick has developed a proprietary and protective dispenser to make carrying your caps easier while riding or running.  I haven’t yet tried using this.)   I used both the dissolve and carry methods on long runs and rides;  to carry, I simply put them in an empty foil chew/bar pouch and stashed them.  At about 145 lbs, I have been using 1 capsule per hour during the winter months, and will likely move to 1 capsule every 30 minutes during the warmer, more sweat-inducing Southern California summer.  The packaging and website provide more detailed information on suggested use.

I have used Saltstick capsules on century training rides and multi-hour training runs, and am convinced of their advantage. I am so happy with their effectiveness and ease of use that I will be using them throughout the year during training, and for the several ultra races and I have scheduled.  I will also be taking SaltStick Caps Plus with me on any multi-day fast-packing trips I’ll do this year.

SaltStick Caps Plus is a must-have for people who engage in exercise lasting over two hours, and who are focused on dialing-in their nutrition to really maximize performance. 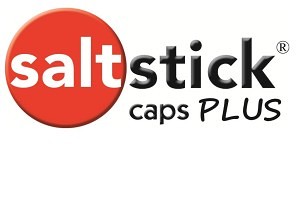