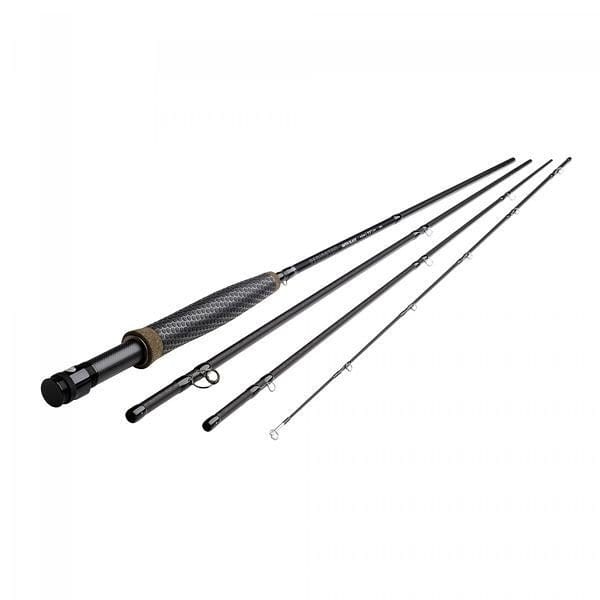 When asked to test Redington’s new fly rod the Vapen Black, the simple answer was yes. Even though prime fishing season in Colorado was tapering off, I heard a few local guides gossip about the rod’s unique qualities. Naturally, I had to whet my appetite, and test this on my local water – the Eagle River.

Unpacking the rod, the 4-piece kit came in Redington’s standard cordura rod tube and suede sock.  Some may be disappointed to see this from Redington’s high end rod this year, since last year’s Link (highest price point rod) came in a flashy carbon fiber rod tube.

While the rod tube is no indication of it’s performance, its an added bonus to have a carbon case for those looking to save a few ounces while backpacking to high alpine lakes.

After unraveling the sock, and laying out the pieces, its clear Redington didn’t forget about the visual aesthetics of the rod.  Clearly seen are logo accents, a matte finish blank that has a stealthy shimmer, clean lines of the cork and PowerGrip handle, and nicely laded snake guides. 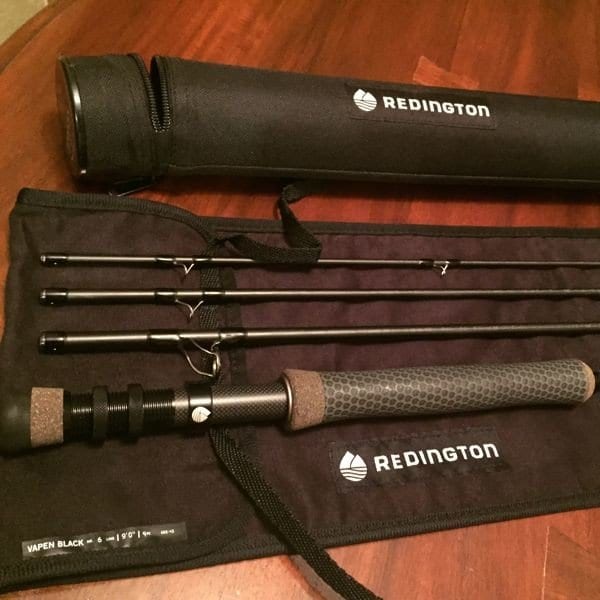 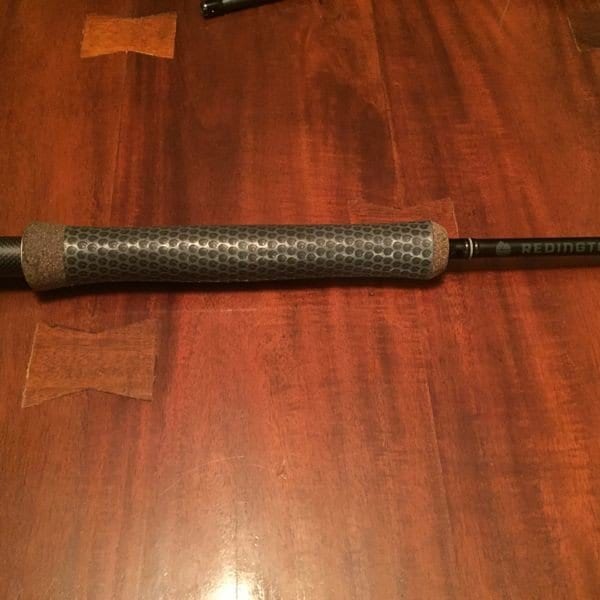 In the fly fishing world, rod innovation is usually seen through the production and manufacturing process. Rarely do we see changes that enhance the fisherman’s convenience or comfort.  However, the Vapen Black fills that opportunity by introducing the PowerGrip.  As noted on the Redinton site, this is a “non-slip polymer grip technology created in conjunction with Winn Grips and to reduce fatigue and amplify power”.  For those that don’t know, Winn Grips is well known for their golf club grips which many around the world tout as the best grips in the world.

To skin, the polymer grip is soft and tacky, while still holding its form and density.  To be clear, its not so soft that it will literally form to your fingers gripping the rod.  The feeling will be foreign to anglers using traditional cork, but not so much that it will turn people off by its first impression.

On a sunny and dry day, I enjoyed the dampness and tacky feeling the PowerGrip provided; especially with wet hands after releasing fish.  Unlike a cork grip that can hold moisture, this polymer beads water which would naturally drip off or can be dried off just as easily. During casting the grip provided a solid feel of the rod. I would even go as far as to say that it helped deliver a cleaner finish by having that range of dampness.

On a cold and snowy day, I was wearing slightly insulated gloves which reduced the feel of the rod overall, but my casts were just as delicate and the rod’s grip still had those dampening effects observed from the sunny outings.  With snowflakes falling and my guides freezing over, the grip managed the snow and water with no problem.  It never froze up or lost its tacky feeling.  In the wet and snowy conditions, the PowerGrip won me over since most cork grips will absorb that moisture and usually freeze up in cold temps. 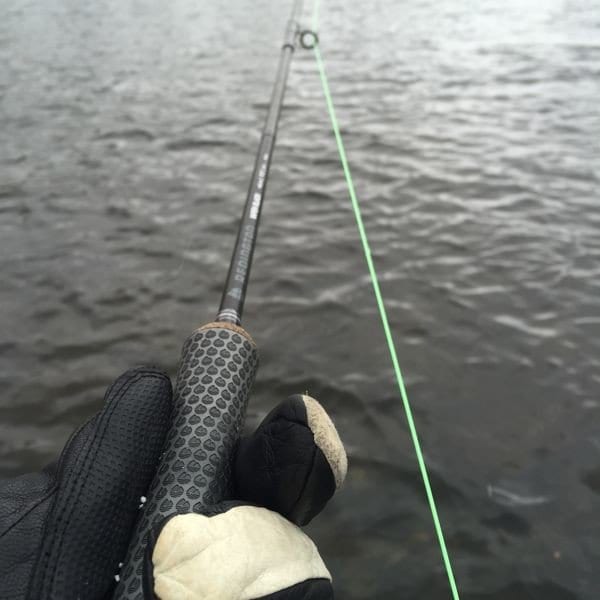 While most of this review focuses on the PowerGrip of the Redington Vapen Black, theres more to the rod than its innovative grip.  This fast action 6-weight rod fished well and delivered a variety of large nymph rigs and streamers with ease.  The Vapen Black loaded well and released its power as wanted, but I do feel its accuracy could be better.  The liner casting motion was fine, but I believe the rod tip’s rigidity could be improved upon.  On several occasions my casts were up and down stream a bit from my desired target.

In addition to the soft tip of the Vapen Black, I suspect the PowerGrip and its dampening effect (which was a quality I enjoyed) might be sacrificing the transmission of power and limiting the anglers aim.  Its hard to prove this without a variety of engineering tools, but with a few days on the water and picking up the rod’s characteristics; I still felt like its casting aim was never spot on. 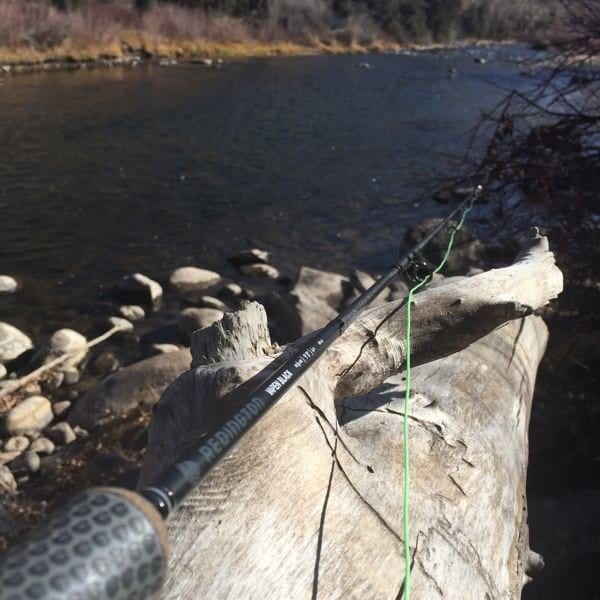 Getting tested on the Eagle River, CO

With any high end rod, anglers always look into the details and appreciate the extra attention from manufacturers.  In this case the Redington Vapen Black fly rod showcased some nice finishes that separate the rod from its competitors: 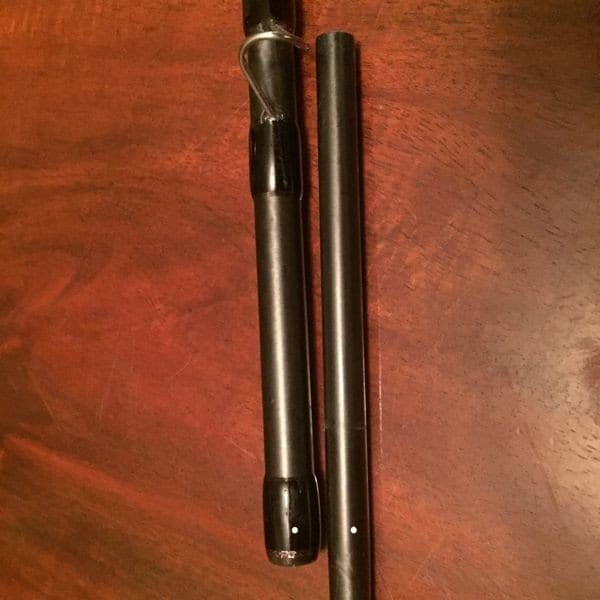 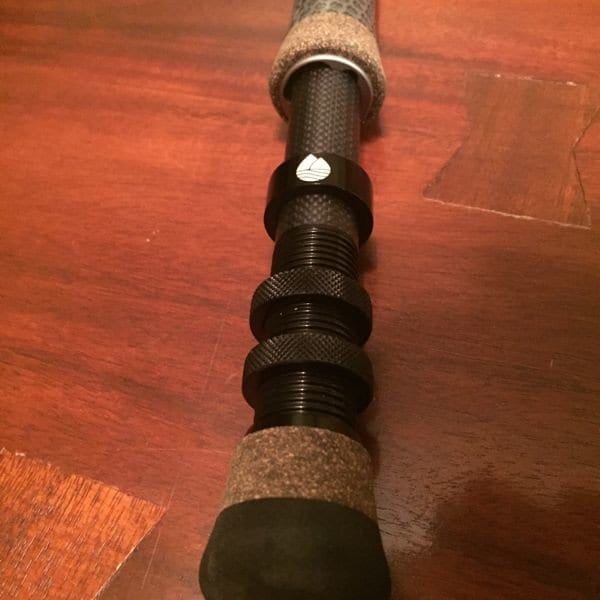 The Redington Vapen Black fly rod was a pleasure to test and I only wish I had more time to fish with it.  There were some opportunities to make the rod a stronger candidate among its competitive brethren – casting accuracy and aim, packaging, and versatility; but it fits nicely as a do-it-all rod in the hands of any average angler.

For those who already have a few rods in their arsenal the Vapen Black will fit well in the niche category. The unique PowerGrip provides exceptional performance in cold temps that rival the traditional cork rod.  Plus its lifetime warranty and high quality components come at a price well below other top of the line rods from other brands.

I'm a New York transplant, now a Colorado resident for over 6 years and living in the Vail Valley; life isn't too shabby with rivers in my backyard bursting with trout, winter steeps that balance the resort access, and high-alpines huts to escape to on the weekends. While tackling marketing efforts behind a desk on a typical weekday, once the hand strikes 5PM I'm out on the river casting my 5wt landing trout (brookies, cut-throats, or rainbows) or exploring the trails between Vail Pass and Eagle on my bike. Sometimes the weekend offers the opportunity for a new adventure, cruising as far as Moab to ride the Whole Enchilada or backpacking to Vestal Peak.