Altra introduces the Escalante Racer – Chicago, to commemorate racing in the Windy City with a red, blue and gray color scheme and a skyline silhouette on the lateral heel. The medial side features a large “18” to represent the year along with cursive “Chicago” lettering. 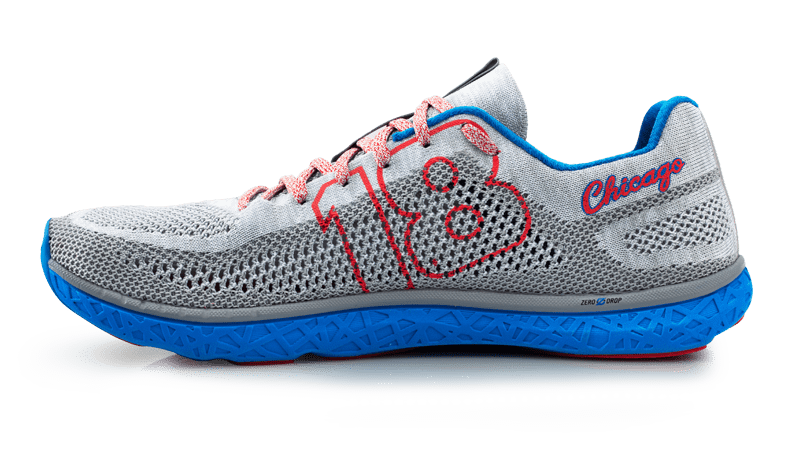 This limited edition shoe is a lighter, speedier version of the brand’s award-winning Escalante road shoe, made to tackle big city races.

The Escalante Racer has a specially engineered knit upper for optimal cornering and quicker movements on the race course, with a breathable sock-like fit. Altra’s EGO™ midsole has been “race-tuned” to deliver more energy return for a highly responsive ride. Altra’s Foot Pod™ technology maps the bones and tendons of your foot to provide more natural flexibility.

The Racer has a 22 mm stack height and weighs just 6.8 ounces for men and 5.7 ounces for women. This racer is available for men and women in the same style and colorway.

The Escalante Racer – Chicago retails for $140 and is available on www.AltraRunning.com and at select specialty running retailers.

While working at a running store, Altra founder Golden Harper was frustrated that modern running shoe technology caused poor running form and had not decreased running injuries. His passion to create a shoe that followed the science produced Altra’s FootShape™ toe box, Zero Drop™ platform and Fit4Her™ female-specific shoes. Since its founding in 2011, Harper and co-founder Brian Beckstead have grown Altra from one to 30 shoe styles, winning multiple Editor’s Choice awards and distribution in more than 60 countries.