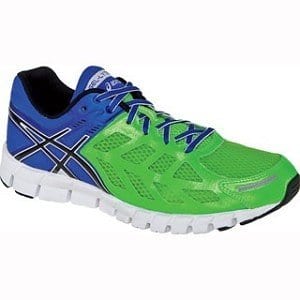 For the Asics lover that has been waiting for a great minimalist shoe to arrive, the wait is over.  Let me introduce to you the Asics Gel Lyte 33 which weighs in at 7.8 oz. in a size 9 for men and 6.4 oz. for a women’s 7.  While it has taken Asics a little while to come out with a true answer to minimalist running, I feel that the Gel Lyte 33 is the real deal for the runner that wants the minimalist running experience. 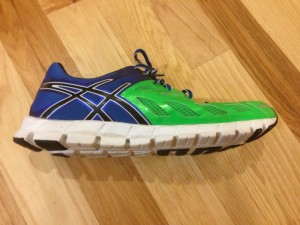 While the 33 line from Asics has dabbled into minimalist running, I feel the Asics Gel Lyte 33 is much more trimmed down allowing the foot to do more work and the shoe to do less work.  The main difference that you will see compared to a standard Asics running shoe is the midsole and outsole of the shoe.  The midsole of the Lyte 33 is made from a lightweight blown EVA that has no hard plastic built into it.  Most of Asics running shoes will has a hard piece of plastic incorporated into the midsole and outsole providing a little support, but not the Gel Lyte 33.  If you are familiar with the Nike Free’s where the outsole is pretty much blown EVA and a little bit of rubber for the outsole, this is similar, but uses Asics technology.  Compared to the Nike Free, the Gel Lyte 33 has semi decoupled pods for the midsole, providing plenty of flex, but not to the point where you have EVA pods flexing every direction.  What I like about this is that the EVA pods don’t get rocks caught in between them which can add weight and can wreak havoc when you walk on wood floors after your run.  The Asics Gel Lyte 33 has a 6mm heel to toe drop, going from 16mm in the heel to 10mm in the toe.  Traditional running shoes usually have between a 10-12mm drop. 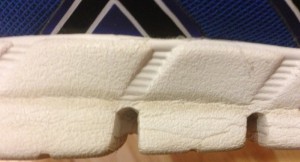 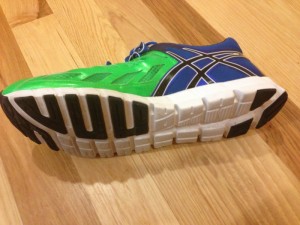 The outsole of the Asics Gel Lyte 33 is very minimal.  Asics looked at the wear patterns for most runners and only put a small amount of their outsole rubber in the most common wear spots.  This includes 3 small spots on the heel, 3 somewhat bigger placements going from the inside of the midfoot to the toe, and one piece that sits under the front end of the shoe.  Since this is for the minimalist runner, I feel this is an ample amount of outsole rubber and the placements work for most runners.  When I’m running midfoot to forefoot, I tend to use the outside of the platform.  I’ve seen some wear in this area, but not enough to warrant concern. 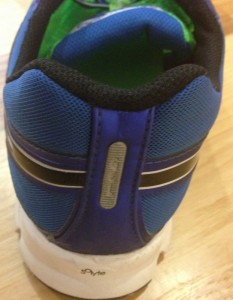 The upper of the Asics Gel Lyte 33 is much more flexible than a standard running shoe.  To start, there is no hard plastic heel cup that keeps your foot/heel in place.  Instead, Asics uses the fabric it uses in the rest of the upper with synthetic material that goes up the achilles.  As long as a shoe company has a tight enough wrap around the heel with the fabric, there is usually plenty of foot security.  In the Gel Lyte 33, they were able to hit the nail on the head.  Along the inside of the heel, there is a very small amount of padding, allowing the foot to have a little bit of comfort so the fabric isn’t cutting into the foot, but it’s about 1/10 the amount of padding used compared to most other Asics models.  For the rest of the upper, there is a minimal amount of fabric used, but there is enough to hold the foot in place.  This fabric is assisted by synthetic material along the side of the shoe that provides a little more support and keeps your foot from blowing out the side of the shoe.  The toe box of the Lyte 33 is has plenty of room for your toes to splay, allowing the foot to land the way it was naturally intended to.

I’ve tested the Asics Gel Lyte 33 while running distances from 3-12 miles.  Since I have been running in a number of different running shoes including other minimalist running shoes, I am used to the 6mm drop.  For people trying these shoes or other minimalist shoes for the first time, I suggest you start out with low mileage and work your way up whether it is distance or time.

Overall, I have been super happy with the performance of the Asics Gell Lyte 33 and I highly recommend this shoe for the runner that is looking for a minimalist running shoe.