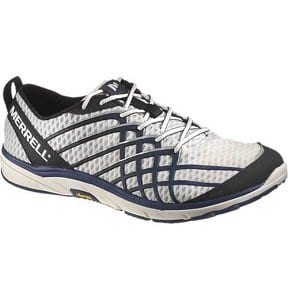 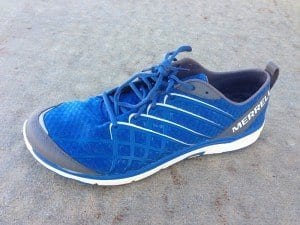 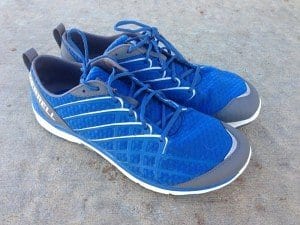 The Bare access 2  does a nice job of fitting into the minimalist category weighing in at 7 oz. for men and 5.5 oz. for women on the half pair.  This is very lightweight for running shoes which creates less emphasis on the shoe while running and more emphasis on your running form and gate.

The midsole of the Merrell Bare Access 2 is made from a blown EVA that is not too soft and not too firm.  For the outsole of this shoe, Merrell uses Vibram rubber which holds up really well if you’re logging a lot of miles.  The pattern used in the outsole is small diamond and square shaped rubber pegs that are best used on the road.  It doesn’t have the luggy pattern you typically want for traction on the trails, so if you end up in mud, you will slip pretty easily.  This doesn’t mean that you can’t take them on the trails, I’m just saying they perform better on the road.  For testing surfaces, I’ve run on pavement, cement sidewalks, and dirt and gravel paths. 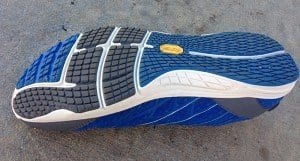 The upper on the Merrell Bare Access 2 uses a lot less material than a pair of traditional running shoes, but the amount of material used compared to other minimalist running shoes is average.  One of the main differences you will notice between a minimalist running shoe and a traditional running shoe is the padding around the heel on the inside of the shoe.  In the Bare Access 2, there is enough material to keep your heel in place, but not much more than that.  To help keep the heel in place in this shoe, Merrell uses a  piece of synthetic leather that wraps around the heel to keep your heel grounded.  This does a good job but I did get a little bit of heel lift while walking in this shoe.  While running, this feeling goes away and is not an issue. 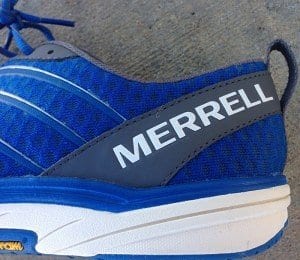 The toebox in the upper is wide enough to allow an average foot to splay.  Since your gate should be going from the midfoot through the forefoot, it is important for the foot and toes to splay for balance reasons.  The Bare Access 2 Upper has patterned synthetic leather lines that provide the upper a little structure and keeping the foot from feeling to sloppy while running.  The mesh material used in this shoe is minimal and breathable, but plenty enough to hold up for 500 miles plus. 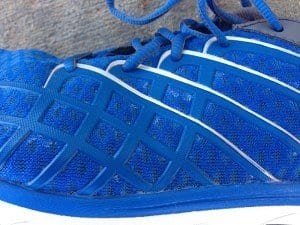 Overall, I found the Merrell Bare Access 2’s to run like a barefoot running shoe with the 0 mm drop, but offers just enough cushion for those wanting it.  This shoe is good for people looking to transition into minimalist running or runners logging longer runs.

For more info on the Bare Access 2 and other Merrell footwear, visit www.merrell.com.

Note: This shoe tends to run about a half size big, so I suggest going down a half size if you are ordering online or try on a few sizes when at the store.