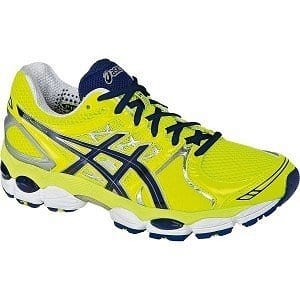 Just when you thought the shoe that has been perfected in so many runners eyes and feet, the Asics Nimbus 14 has done it again.  They have continued to push the envelope combining the world of cushion, function, all while shaving off a half ounce to get you a little lighter on your feet.

As a someone who has been running in the Asics Nimbus over the last 10 years, I have grown accustomed to the soft cushiony ride the Asics Nimbus offers.  There are times when the designers have tried to make changes and I didn’t like all the changes, but over 14 different model updates, you are bound to get a change here and there that not all people will like.  The Asics Nimbus 14 has continued to evolve this year and the changes have all been good in my opinion. 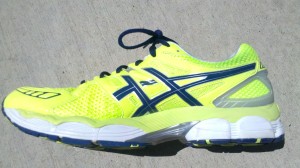 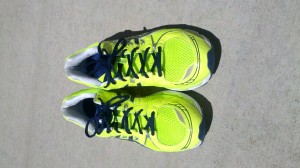 The upper of the Asics Nimbus 14 has seen somewhat of a haircut compared to previous models.  The feel is that there is less material wrapping around the foot, but in a good way.  One of the ways in which Asics was able to reduce some of the material in the upper was by trimming down the plastic heel cup.  Instead of making one solid heel cup, the design team decided to cut out 3 large holes in the heel cup which reduces bulk and weight, but the structural integrity of the heel cup remained in place.  To fill in the cutouts of the heel cup, the Asics Nimbus 14 has a mesh material that is used on much of the upper.  Another way in which the Nimbus 14 was able to shave off weight and bulk is by reducing the amount of material on the synthetic overlay that wraps around the foot.  Once again, I feel there is less material, but the structural integrity is still there. 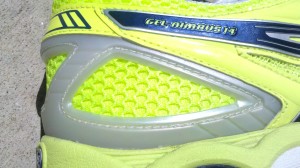 As everyone’s foot shape is unique, the Nimbus 14 has independently placed eyelets to spread the tension to reduce the chance of creating a hot spot or an uncomfortable area for the foot.  As for the cut around the ankle, I found the Asics Nimbus 14 to sit a little lower around the ankle.  Depending on your preference, this could be good or bad, I personally like it. 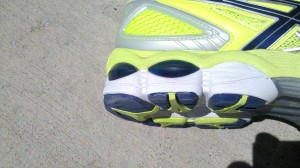 The midsole of the Asics Nimbus 14 is made from a combination of different materials and foam densities.  Closest to the foot, there is a layer called Solyte.  This material is lighter than other asics EVA materials while maintaining durability.  When I first received the shoes, I thought that the shoe was going to be a little stiffer than how it felt when I first tried them on.  It felt as though I was putting on a new pair of cushiony socks, you know that feeling…  The Asics Nimbus 14 also comes with the Asics Gel that we have all come to know and love.  This gel helps absorb the ground impact and helps rebound you into your next stride.  The Gel in the Nimbus 14 is in both the heel and the forefoot. 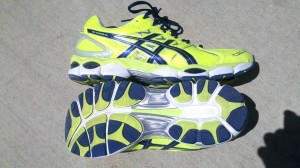 Overall Impression of the Asics Nimbus 14

If you have any further questions on the Asics Nimbus 14, please feel free to leave your question in the comments section and we will do our best to respond as quickly as we can.  I have run long runs up to 15 miles, speed workouts, and logged daily 6 mile runs in the Asics Nimbus 14 and the shoe has performed exceptionally well.  If you have been running in the Nimbus 14 and want to leave feedback, good or bad, please feel free to do so!

For more info on the Nimbus 14 and other Asics footwear, visit www.asics.com.