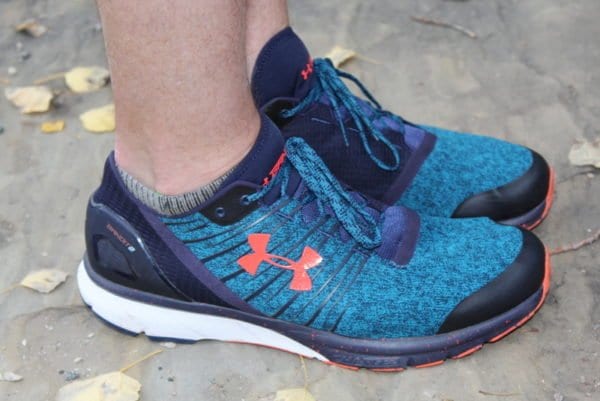 The upper of the Under Armour Charged Charged Bandit 2 is one of the the better running shoe uppers on the market.  The shoe has a simple, yet sophisticated and stylish look.    As we all know, if you don’t have the right fit in a running shoe or any other shoe for that matter, it won’t perform as designed.   I found this out the hard way as I typically wear a 12.5 in a running shoe and after a month of jamming my toes in the shoe, I asked Under Armour to send me a 13 to test out.  The size 12.5 size review of this shoe was not favorable since a half size small made this shoe nearly unbearable to run in.  After running in a size 13, the shoes pulled a 180 and has quickly become one of my go to running shoes. 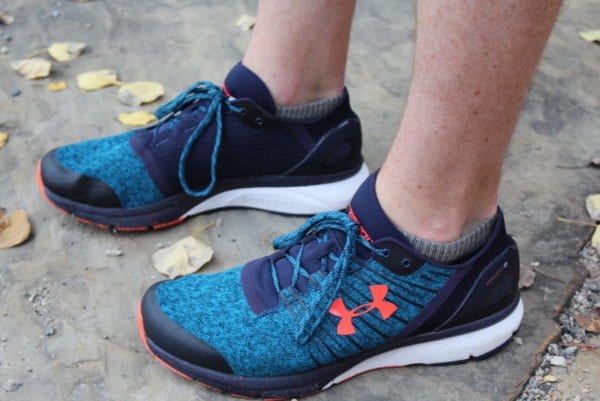 The fabric used in the upper is a combo of a mesh like material and a heathered fabric that is very pleasing to the eye.  There are a minimal number of overlays on the upper that hold the shoe together.  If you’re a casual runner that sticks to average roads and sidewalks, this won’t have an effect on your run.  If you’re running on trails or lots of uneven surfaces, this could pose a problem.   To create support on the upper, there is a tighter weave mesh on the inside and around the heel of the shoe that is firm and less likely to move on you.  This is meant to keep the foot from collapsing inward, but if you’re a heavy pronator, this will not correct your stride.  For neutral runners, this upper design is perfect. 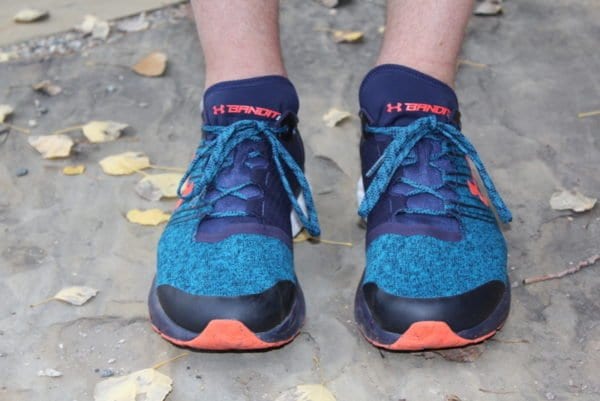 The tongue on the Under Armour Charged Bandit 2 is connected on both sides of the shoe which keeps the tongue from sliding down to one side or another.  The tongue is much larger than the normal running shoe tongue.  Originally I thought this would rub my skin raw when wearing ankle no-show socks, but I was pleasantly surprised as after dozens of runs, the tongue didn’t bother me one time.

The midsole is a blend of firm and soft EVA.  The heel of the Under Armour Charged Bandit 2 running shoe is firm to keep it from breaking down too quickly while the forefoot of the shoe is softer for a smooth transition through your stride. The offset of the UA Charged Bandit 2 is 10mm from heel to toe, which is a little more than normal compared to other running shoes on the market, but I haven’t found this to be an issue.  I am seeing most running shoes these days range between 6-8mm for a heel to toe drop. Keep in mind, heel to toe drops before the minimalist craze ranged between 10-14mm. 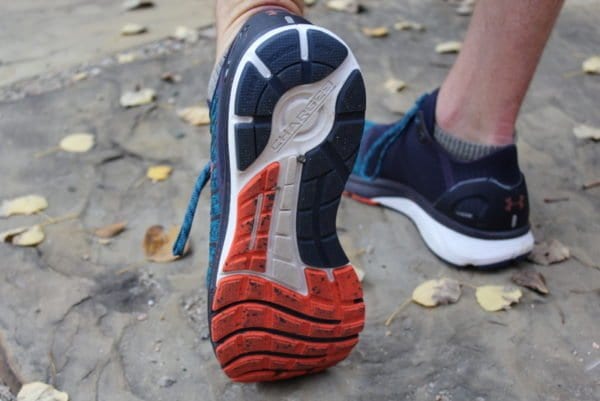 The outsole of the Bandit 2 is both durable and provides just the right amount of grip for road running.  There is a small amount of flexibility in the outsole through the forefoot, but I wouldn’t compare it to other big brand shoes that allow the shoe to roll up like a roly poly bug.

The Under Armour Charged Bandit 2 fits a normal width foot well.  The rear of the shoe keeps your heel in place, removing the possibility of rubbing and creating heel blisters.  The toebox is roomy and can fit normal to semi wide feet.  If you have flat feet, this shoe most likely won’t have the amount of support you will want and you will most likely blow out the forefoot area in a short amount of time.

While most running shoe companies come out with shoes that look like their only designed for running, the Under Armour Charged Bandit 2 has a style that looks great for both running and wearing out on the town.  The lines on the shoe are clean and the EVA in the front of the shoe is colored in, so you don’t have a big white piece of foam screaming, look at me, I’m wearing my running kicks!

At $99.99, the Under Armour Charged Bandit 2 is a great value.  This shoe offers pretty much anything you could ask for and it saves you $30-$50 over other high end running shoes.  The toe box has a little play in it, but to me this is not a deal breaker.  For more information, visit www.amazon.com/underarmour.