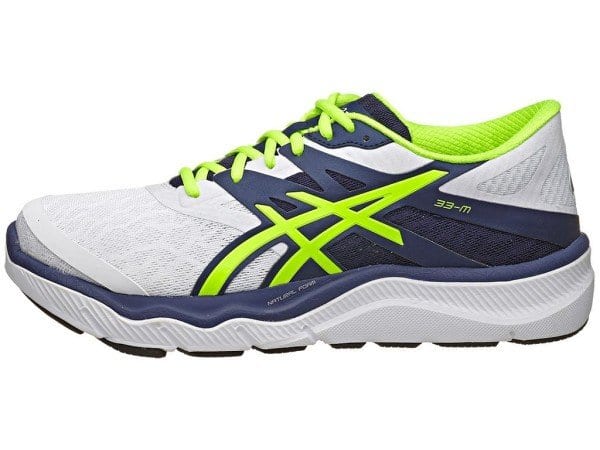 With the veritable cornucopia of shoe companies all coming out with a “maximal” design, it’s no surprise that Asics threw their hat into the ring with the Asics 33-M, out new this Spring. Asics, a company long known for listening to runner and R&D feedback, wasn’t satisfied with just making a maximal shoe, though – they had to take the maximal approach and put their own spin on it. Thus, the Asics 33-M really defies categorization, because its design approach follows both maximal and “natural” running construction ideals to form an excellent hybrid shoe.

When I say the Asics 33-M is combining maximal and natural design elements, most would wonder if I’m a bit off my rocker. The two concepts seem completely at odds, especially when you consider that natural running is most often associated with minimal running. The two are not one in the same, however, and what the Asics 33-M achieves is the ability to have your foot behave in a natural manner all while affording a maximal level of protection and cushioning. When broken down like that (and after 6 weeks of long runs in the Asics 33-M), you could wonder (instead of wondering if I have a screw loose) why more shoe companies don’t strive for this same combination. 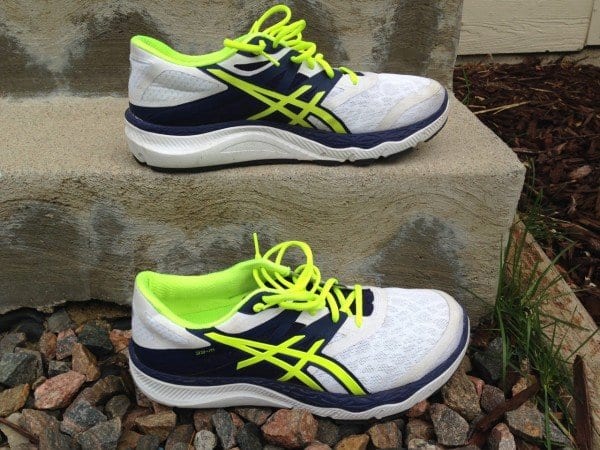 As mentioned above, I really put some miles on the Asics 33-M. It’s designed primarily to be a long distance offering – indeed, the marketing campaign seems to target the rapidly growing marathon crowd. Asics (with the Asics 33-M) is actually really tapping into two growing markets, which I think will lend itself to the inevitable popularity of the shoe. My longest run was just over 20 miles, and my shortest run (and my last pre-marathon long run) was just under 10 miles. I actually took them for an 18 mile run out of the box, and never really let up from there until my mileage decreased – I liked them so much I plan to run both of my upcoming Marathons (Lincoln, NE and Green Bay, WI) in them. All total, I’ve spent 93 miles in the shoes – I did this for two reasons. One, I didn’t really feel like I’d broken them in until about mile 50 or so, and two, I wanted to see if the Asics 33-M was all it was cracked up to be week in and week out. 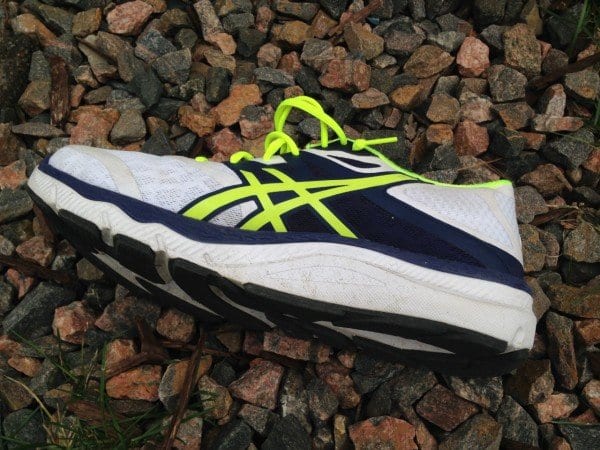 The maximal cushioning on the Asics 33-M is firm, yet takes a bit of breaking in to soften up.

To begin with, my first run out of the box was not that inspiring. For runners considering this shoe, I’d advise to give them more of a spin than just around the parking lot, or on the treadmill in the shoe department like most big box stores will offer. I always advocate for a local running store, but in this regard pick one that lets you try them out for a few runs and then get store credit if you aren’t satisfied. The reason I say this is that for a forefoot runner, the midsole felt a bit unresponsive on the first couple runs. This in turn made the shoe feel clunky, and almost jarring. I wondered for those first runs if maybe in an attempt to build a shoe for longevity, Asics had created the Asics 33-M with too much “protection” and not enough cushioning. The part that had me coming back (aside from my journalistic integrity) was that even though the shoe didn’t feel smooth on landing, it had a feel for the road that almost all other maximal shoes lack. I like how sure footed it was immediately, and even took them for a few spins on gravel surfaces as a result.

This “clunkiness” in heel to toe transition softened for me right around mile 50. It wasn’t an all of the sudden transition, just a gradual feeling that I had finally “broken in” the shoe. This is really when I started to like the feel of the shoe. For me, this is the best part of the Asics 33-M; the cushioning is maximal, but when you’ve finally broken the shoe in, it doesn’t feel like it – I’ve tested more than a few max cushioned shoes, and until the Asics 33-M, they all kinda feel like you’ve got marshmallows under the balls of your feet. Not so with the Asics 33-M – it feels like you have protection and cushion, but it doesn’t feel like you are losing gait efficiency or making your muscles work harder to compensate for the additional cushion. 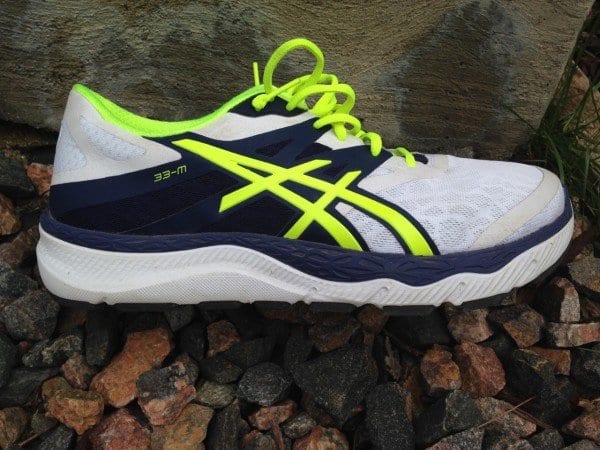 For all the cushioning in the Asics 33-M, there is only 4 mm of heel toe drop.

I’d be remiss if I didn’t stop talking about the cushion profile (which truly is the best feature of the shoe, as you get all the cushioning for a weight of around 10 oz), and start talking about why this shoe fits in with natural motion shoes. Asics put only a 4mm heel toe drop in the shoe, which really seems to hit the sweet spot for me – I tend to feel a bit underwhelmed by zero drop or 8mm drop, which is really just personal preference. This, combined with the shape of the last and construction of the upper is what makes it a natural motion offering. Asics went against their trademark last to widen the toe box out slightly to give your toes room to splay (which they do REALLY well in pair of Injinji Toesocks, reviewed by yours truly here), and allow for the ball of your foot to spread on impact. The shoe also has no pronation correction, so your foot can roll naturally. Some will like this, some will not. I personally like the approach, as it took a natural motion shoe, and just stuck some more protection on it. 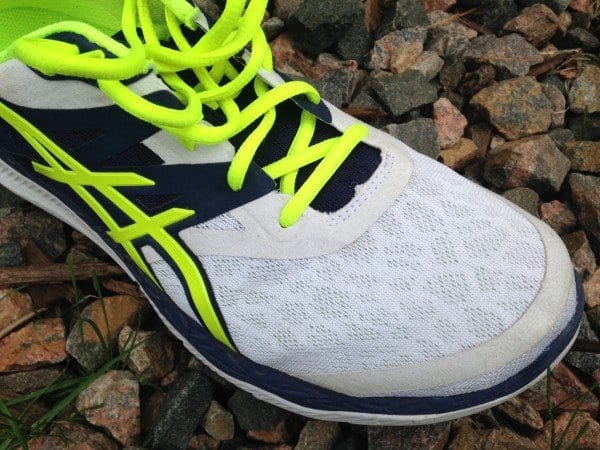 The toe box is widened on the Asics 33-M to allow for natural foot movement.

I also feel from logging so many testing miles in the shoe that it’s built to last. The other danger of maximally cushioned shoes is the increased ability to wear overpronation patterns in the cushioning. Simply put, none of that cushion resists the foot roll; the long term effects (much like the barefoot running movement of years past) are yet to be seen. The Asics 33-M differs from this in that it offers that cushion/protection, just more firmly than others.

Final Thoughts on the Asics 33-M

Overall, the Asics 33-M is a great selection for long distance runners who seek enhanced cushion and protection without gaining stability and pronation correction. The widened toe box and roomy last combine with a maximal cushioning platform to create a ride that is unique to Asics. Give them a try for long miles (and give them a chance to break in) and you won’t be disappointed. The added bonus is that the Asics 33-M comes in on the lower range for a maximal shoe (most are running in the $160 and above range), so at $140 it actually becomes an easier choice for you. Support your local running store or head over to the Asics website to check out the Asics 33-M in a few different colors. Cheers.

*Running Update – Marathon Month was great for us – I completed both the Lincoln Nebraska Marathon and the Green Bay Cellcom Marathon running in the Asics 33-M. As of the date of this quick note, I’ve put a bit over 300 miles on these shoes – 52.4 of them in back to back marathons. While they feel “broken in” the do not feel “broken down.” I will use these for the remainder of the season on long runs, and feel confident they’ll get 500-600 miles on them before I’m ready for a switch.

Okay, 13 days were in between the two races (we raced a 5k in between, and the Bolder Boulder the week after) – so not truly “back to back” but still. The Asics 33-M performed beautifully in both. In the Lincoln Marathon, conditions were hot and humid, but I felt no adverse blistering or heat in them. The Cellcom marathon was cool and slightly damp, and again I felt comfortable in the Asics 33-M. I was a bit concerned about them in hot conditions, but I needn’t have been so. Cold weather and Hot weather runners will enjoy them equally.