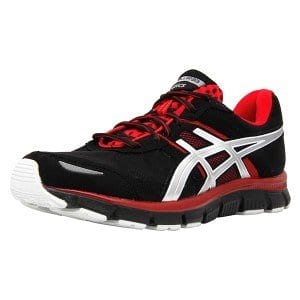 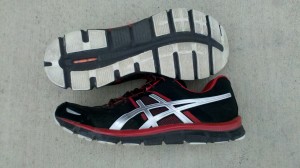 The Asics Blur 33 weighs in at 9.88 oz. which is fairly lightweight, but I would put it as average compared to other minimalist running transition shoes.  When out testing the Asics Blur 33, I found the shoes to feel similar to a regular neutral running shoe.  Most neutral running shoes are weighing in at 10-11 oz. these days and with the Blur 33 weighing in at 9.88 oz, it is hard to tell the difference in weight. 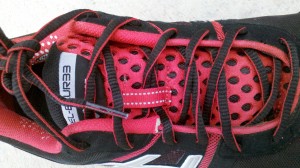 The Asics Blur 33 has a mesh upper that allows the shoe to breath well in warmer temps helping to keep your feet from overheating.  The midsole is made of what Asics calls Solyte which is lighter than your traditional EVA.  The midsole also contains the Asics Gel in the rear foot to provide a smooth heel to toe transition.  While this is a nice feature, minimalist running doesn’t really promote heal to toe running, but more of a forefoot running style keeping you on your toes a little more.  My opinion of the ride of the shoe is in the middle of the road between firm and soft.  So it is somewhere between an Asics Nimbus and Asics Kayano if you are an Asics fan. 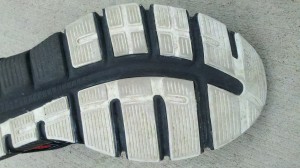 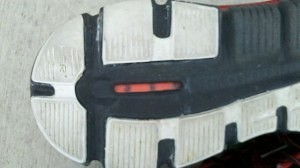 For durability, I found the Asics Blur 33 to hold up very well over hundreds of miles.  The upper still holds its shape very well and the outsole hasn’t worn down too much.  My overall impression of the Asics Blur 33 is that the shoe is a good transition for those looking to dabble in minimalist running.  If you are looking to dive into minimalist running, I would suggest another model with a little less shoe.