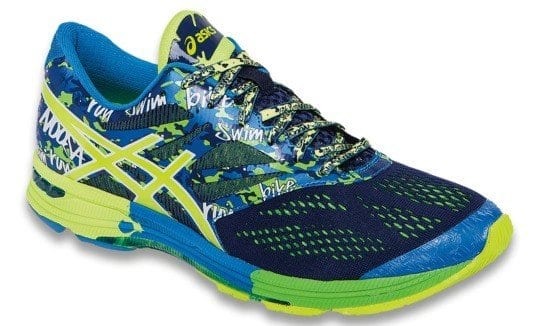 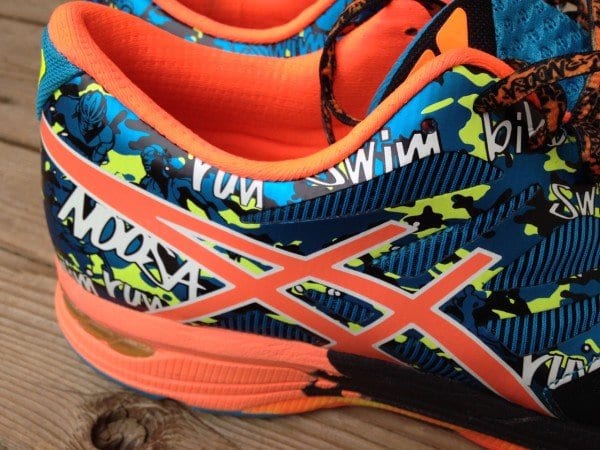 I know what it says… but don’t go swimming in the Asics Gel-Noosa Tri 10.

A company like Asics certainly needs no introduction – they’ve been a staple of the running community since 1949 – and the Gel-Noosa lineup (of which the Asics Gel-Noosa Tri 10 is certainly a member) has been around almost as long. Okay… not quite, but if you’ve been to a big box running store in say, the past DECADE you’ll have seen something from it. There’s a reason this lineup has been out for so long, and also a reason why it has a devoted following. The Gel-Noosa lineup is solid, dependable and has all the right frills in all the right places. If anything, the updates to the Gel-Noosa lineup have been on the conservative side, and not especially subject to the whims of the “latest and greatest” running fads. This has only served to make it’s following more devoted. But what about the triathlon slant towards this extremely popular shoe? This is my first go round on the Triathlon specific model, and the comparison was certainly interesting. 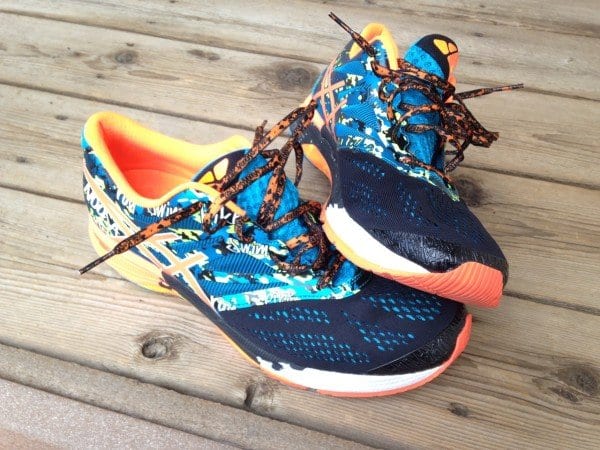 Check out the bold colors on the Asics Gel-Noosa Tri 10.

Right out of the box, it was obvious the Asics Gel-Noosa Tri 10 was a bit of a different animal. Conservative isn’t exactly the word I’d use to describe the color scheme – it’s loud, just on this side of obnoxious… and somehow it totally works. The pictures don’t do the colors justice, because whoever designed it at Asics obviously knew their color palette – the color scheme somehow manages to be loud and bold without going over the top. If you’re turned off in any way by the color scheme (I certainly don’t love drawing attention to myself at a race – here in Colorful Colorado the competition is a bit fierce), give the shoe a go first before making your decision – remember, these are on your feet. There are four color choices available on the Asics Website, but none of them are any less bold. Best to just pick one and try to hold on. It was also immediately obvious that while the shoe was geared towards triathletes, road running enthusiasts would like it, too – it added several features onto a road running classic.

Picking it up out of the box, the heft is obviously lightweight (a quick web search revealed an average weight of 9.9oz), and Asics even saw fit to include extra “speed” laces in the box with the Asics Gel-Noosa Tri 10. It’s nice to have the option to have “normal” laces on the shoe, as several different triathlon shoes only come with speed laces. Other additional features include rubber grips on the heel and tongue (just try to get a shoe on in your T2 transition without some sort of pull/grip), a “sockless” liner, and a quick dry mesh upper. 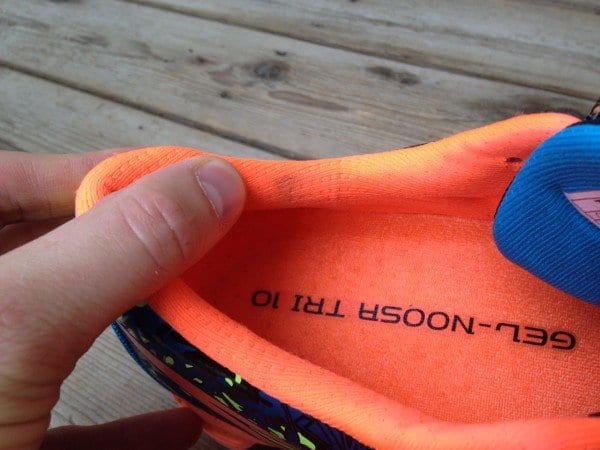 Right out of the box, I threw the Asics Gel-Noosa Tri 10 in my Gym bag and headed over to the pool for a quick workout. I wanted to see how they felt when jumping out of the pool, sliding them on sockless, and taking a quick run. In retrospect, I needn’t have done that, but I’m glad I did. Road runners won’t necessarily appreciate this, but the triathlete crowd knows I did something kinda dumb. In a race, your feet really won’t be wet. You wipe your them coming out of the water, and by the time you come off the bike, your feet are pretty much dry. Sure, in a sprint you’ll have some residual moisture (both from your trisuit leaking down your leg and the dampness of your feet), but any longer distance and you get mostly dry on the bike – or at least I always do. The reason I’m glad I did it, though, is that the dampness of my feet combined with the construction of the shoe immediately tore my skin below my ankle and on the outside of my foot. The sockliner, while soft, didn’t work for me on the Asics Gel-Noosa Tri 10, and it’s important to know that without any big races on the immediate horizon. For some, this won’t be an issue – but successive testing in the Asics Gel-Noosa Tri 10 showed me that hot spots developed on every run in which I was sockless, and quickly – within the first mile. Knowing about this ahead of time prevented any REALLY painful excursions. I don’t typically blister easily, so my guess is that runners looking to go sockless in the Asics Gel-Noosa Tri 10 may want to rethink it. 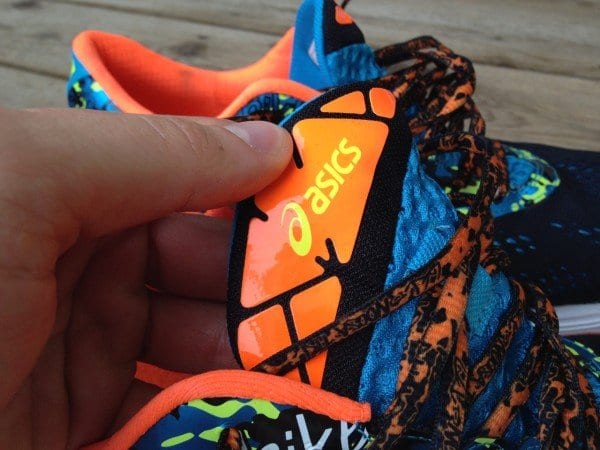 Rubber grips on the tongue of the Asics Gel-Noosa Tri 10 are a DEFINITE welcome addition – they are grippier when wet, too!

Once combined with a pair of socks (such as anything from the Injinji lineup, reviewed by yours truly), the hotspots immediately went away. This led me to a slight conundrum – I love running in Injinji, but they aren’t quite practical for short course triathletes as you can’t get them on quickly. I switched sock choices for the testing phase of a few weeks over distances up to 12 miles (hey, I was recovering from a couple of Marathons, sue me for running short), but still managed to get just under 80 miles on these. Lacking the hotspots, really the only other issue I had with the shoe was the large amount of heel toe drop present. 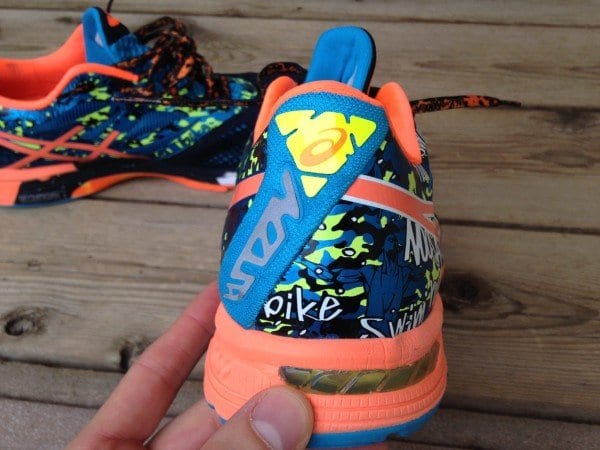 A rubber pull on the heel is helpful, but runners should be aware of the 10mm heel /toe drop on the Asics Gel-Noosa Tri 10 before taking them out for a spin.

At a whopping 10mm, this shoe had the distinction of having the largest heel toe drop of any shoe I’d tested this year. That being said, it wasn’t all that unbearable. When striding out long, the heel toe transition became really smooth and enjoyable – when striding short and using a forefoot strike, the shoe felt a bit out of sorts, and almost clunky. 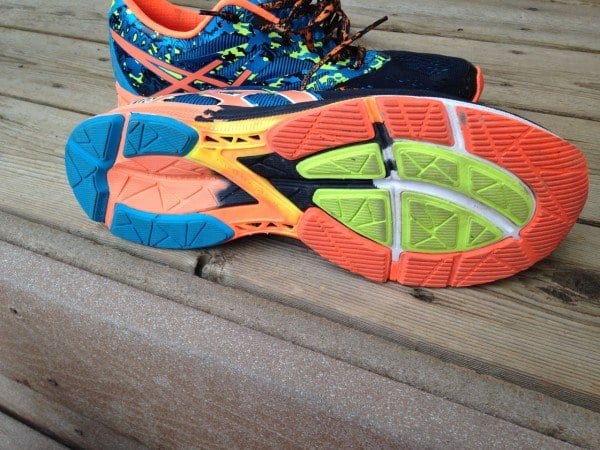 When using a heel strike, the Asics Gel-Noosa Tri 10 was smooth and fast due to the outsole construction.

The feel for the road in the Asics Gel-Noosa Tri 10 was nothing short of awesome. When slipping these on, I immediately felt fast due to how low slung the forefoot is. The combination of the outsole and midsole makes for a very confident stride, and on smooth surfaces the heel-toe transition was excellent. I really loved my sprint workouts in the Asics Gel-Noosa Tri 10 – every time I went into a sprint, the shoe felt like it responded instantly – try a pair out, and you’ll feel like it’s really built for speed workouts. This is where the Asics Gel-Noosa Tri 10 really shines, in my humble opinion – it’s supportive enough for medium distance runs, but feels light and fast to the point that come race day a fast “kick” is certainly in the cards for you.

The Asics Gel-Noosa Tri 10 is a good choice for runners looking for a triathlon inspired road running shoe for the upcoming triathlon season – runners will love the fast, smooth, sure footed feel of the outsole/midsole combination; triathletes will appreciate the feature set that allows for smooth entry and exit of the foot during that T2 transition. Give them a few spins sockless BEFORE you get to race day, though – every foot is different, and while my left foot quickly developed hot spots from the construction of the liner/upper, my right foot had no problems whatsoever. Go figure. You may find out the sock liner works beautifully for you – and instead of having a triathlon specific running shoe, you get the best of both worlds. This is what was intended in the Asics Gel-Noosa Tri 10 – a low slung, race inspired road shoe with Triathlon specific features added to make a great race day companion. Head on over to the Asics Website to check them out for yourself; at $140.00 MSRP a pair, you are completely ready for race day, including speed lacing should you prefer. Cheers.