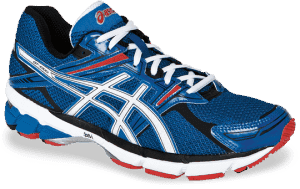 When faced with the myriad of new offerings and new technologies available for general public consumption, sometimes it is nice to return to an old standby. Asics, long known for all things running, offers several shoes in various lineups to fit just about every runner out there. They are also frequently on the cutting edge, releasing new styles and ideas just about every year. There are some shoes, however, which are successful much the way they are – like your favorite coffee mug or old t-shirt, there’s no reason to upgrade just because something flashy and new comes along. 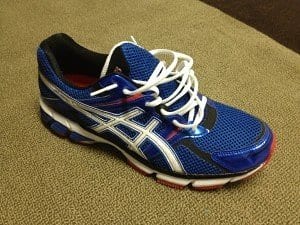 For those looking for a trusted standby, look no further than the Asics GT-1000. We’ve tested a few iterations of this shoe over the years, and this round of testing revealed much what prior years of testing have. First, though, we need to go over a few initial impressions. I was immediately caught by the deepness of the color when I first lifted the newest GT-1000 out of the box. As you can see, we tested the deep blue (royal) color – I like the Royal/White/Red palette because the blue is just so rich in color; during a testing run, I was stopped by a woman at my gym who just wanted to ask where I had gotten shoes in such a beautiful blue. Other than the color, the GT-1000 felt much as I remembered – medium weight, stiff midsole with some flex, and pronation correction somewhere near the mid-range of the spectrum.

Unfortunately, the weather in Colorado remains fairly unpredictable, and for an eight to fiver such as myself, it’s been frustrating because of the fact that it’s been snowy for the past few weekends. Despite this, I did manage to get in a few miles outside in these; much of my testing, however, was on treadmills, indoor tracks, and even took them for a few spins on both the elliptical and stationary bike. This is actually one of my favorite attributes of the GT-1000; those looking for a solid, all around gym shoe need look no further than the GT-1000 as the price point can’t be beat. 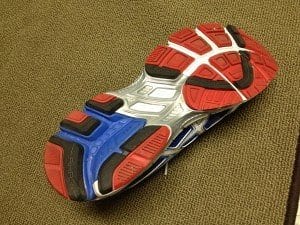 Several treadmill miles and gym sessions later, the blown rubber outsole is still holding strong. The GT-1000 has always shown longevity, and I have no doubt this newest iteration will as well.

On my first few runs in the GT-1000, I was not a fan of the midsole/cushioning combo. I was expecting this, though, due to my prior experience testing them. They need a few (5 mile or so) runs on them before they really soften up to fit your foot. More specifically, when you first walk around in them, the heel-toe transition feels like it smacks down rather than rolls, and the cushioning in the mid sole (dubbed Duomax by Asics) feels as if it pushes into the ball of your foot, rather than supports it. This eases after the first few runs, and as the transition begins to feel much more smooth, so does the cushioning in the shoe. It truly does “break in” to fit your foot, unlike some other shoes which remain the same over a long period of time.

Asics is a little more aggressive in it’s approach to pronation correction than some companies, and it tends to show in the construction of the outsole. Asics put a few different ideas in play here, terming it a “Trusstic” system overall. This is basically to say they combined Gel, blown rubber, spEVA material, and a guidance line together all while attempting to keep the weight of the shoe down. They were mostly successful in this endeavor in that the shoe weighs in at 10.4 oz (on the light side for pronation correction) and works mostly the way it was designed. However, it is a shoe that encourages a heel strike; while I could not find the amount of heel drop listed on the site, I’d say it ranges on the high side. The cushioning is also weighted towards the back of the shoe. When attempting to run with a forefoot strike, the GT-1000 feels imbalanced and slightly uncomfortable. 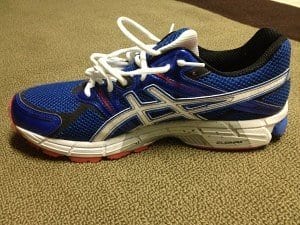 Note how the cushioning, drop, and pronation correction are all shifted towards the rear of the shoe.

Rounding out the construction of the shoe, the mesh upper and blown rubber outsole are nice touches. I’ve always like the rubber used in Asics shoes – it’s grippy without wearing too fast, and provides secure footing in all but the slickest conditions. The mesh upper and padded heel cup are comfortable for multiple temperatures and running conditions. True, I only tested these in cold (For Colorado) temps, but in the past I’ve never had a problem running in the GT-1000 on even the hottest of days. 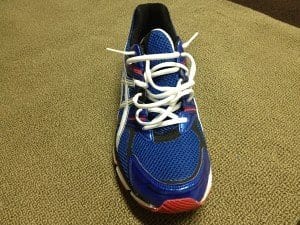 No surprises here on the upper – the mesh upper is comfortable for most conditions.

Overall, I’d say the GT-1000 works the best for those who want a solid and dependable trainer for multiple types of activities, but want running to come first and foremost on that list. As it runs true to size (go up a half size from your sizing in a dress/casual shoe), don’t hesitate to order them online. Heavier runners will enjoy the amount of support given by combination of cushioning and dual density midsole, but lighter runners who favor a medial foot strike may wish to look elsewhere. If you aren’t as much of a fan of the blue as I was, you can always pick from a one of five different color choices – the GT-1000 ranges from a much more subtle silver/blue palette to a yellow so bright it hurts my brain. At a affordable price point of $100, you might even just pick up a couple of colors – perhaps one for yourself, and one for that lady at my gym. For more info on the GT-1000 and other Asics footwear, visit www.amazon.com/asics.