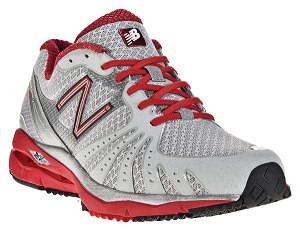 In the 890, New Balance is following a growing trend in the running market. With the popularity of minimalist and barefoot running, they are seeking to stay competitive in the market today by stripping down shoes to the essentials without sacrificing quality. The movement has been termed “purposeful design” and they seem to have really put their money where their mouth is by creating a new “design innovation studio” to revamp key shoes in their lineup. The 890 is the first shoe from this venture. Thank you, New Balance – you hit the mark.

Right out of the box, we noticed the lack of different colored materials in the side outsole, a flat lacing reminiscent of a track shoe, and a fairly plain (for new balance) grey exterior. All in all, it looked impressive and sleek, which led to my first question – did  New Balance trim the toe box (like in the 870) down to an uncomfortably narrow width? And why the flat laces? 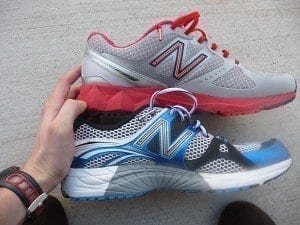 A few quick steps around the living room had me smiling – the toe box felt great, and the shoe had a nice, smooth roll to it that would nicely compliment an even forefoot strike. It didn’t disappoint on the road in the slightest, either. I was also immediately impressed by the weight – at 9.65 oz, it almost felt like a racing flat. But would it hold up to distance? The feeling on the foot was immediately one of a distance shoe, but part of me still wasn’t convinced until I hit the road. The Revlite cushioning felt great on the first 6 mile run, and my first observation of the roll on it was correct – it was adapted very well to a forefoot strike. I also uncovered another unique feature of the shoe – they virtually eliminated the typically fat and cloying tongue material found in other shoes. I usually hate the feeling of shoes right out of the box for this reason – the tongue doesn’t feel right until after several miles – but this isn’t a problem here. I don’t know why no one ever did this before, but New Balance got it right. When combined with the flat laces, the fit is fairly snug, but not uncomfortable for longer distances as well. 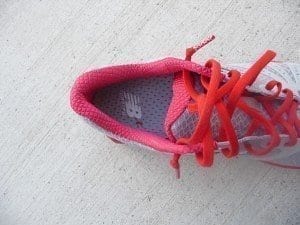 The heel of the shoe is slightly different for New Balance as well. Note below where I compared it to another recent shoe in the New Balance line, the 870. New Balance dropped the sides slightly, and raised the back where it sits against your Achilles. Some runners may not like this feature, especially if you don’t have narrow heels. It didn’t give me blisters, but I tend to favor a very secure heel. 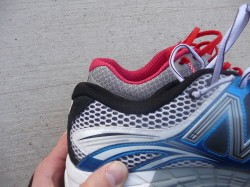 Last but not least, the sole/outsole. This is definitely designed with pavement in mind, and does compliment a forefoot strike. Immediately evident is the lack of plastic bars running across the middle of the foot. Nearly every shoe company has at least one or two shoes in their lineup which features this, but New Balance seems to be getting away from it. If you read the above article closely, you’ll notice that New Balance comments that this technique is new, but the reason I compared it to last fall’s 870 is to show that they’ve been doing it for awhile now. It’s not new, but in my opinion it’s effective. Note – the wear you see on the 870 (the left side) is from approx. 150 miles on the shoe. The 890 (Baddeley) has approx. 45 miles on it. New Balance used the same outer material in both shoes, so I’m going to assume it’ll continue to wear well. 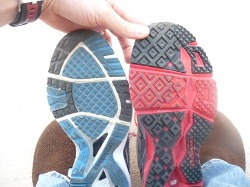 Overall, I was very pleased with this shoe. The only drawback is that it’s so specifically tailored towards one individual style of running – distance on pavement. It’s very much a minor complaint, but don’t expect to feel comfortable on any sort of actual trail (gravel roads were okay) or during any sort of speedwork as the sole is simply too cushioned. It’s a great shoe for those who currently run with a forefoot strike, or who are learning to.  I know that I personally look forward to many more miles in them.

For more info on the 890 and other New Balance footwear, visit www.newbalance.com.