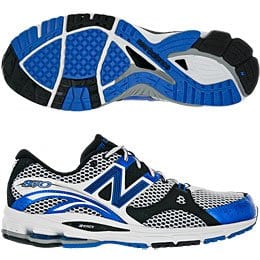 Run faster Chicago! Released for this years Chicago Marathon, the new 870 (mens) hit the market as a light stability shoe that could go the extra distance. I have to say I agree with Shannon (who reviewed the women’s version). This shoe really does go the extra mile.

Right out of the box, it handled a 10 mile run no sweat. Yes, I realize that Shannon took them an extra 8 miles, but she had dogs pulling her along the entire way. What I liked right away (and have liked for many, many miles since) was the lack of any exposed torsion bars in the sole. This provided an extremely smooth ride, as the heel to toe transition was not blocked by a clunky feeling piece of plastic. For those accustomed to the large New Balance toe box, you may be slightly turned off. It is definitely slimmer than usual. I loved other shoes from New Balance for this very reason, and it was a little upsetting that a shoe with so many other great features had suffered this change. I was eventually wrong, as the toe box became comfortable on the very next run.

Normally, lighter shoes tend to turn me off for longer runs. Not the case with this new release, as the cushioning held up great. I’ve currently logged almost 250 miles on this shoe, and have experienced no noticeable wear in the cushioning. At only a bit more than 9 ounces per shoe, this is a great feature set. It’s literally light enough to feel great during speedwork as well.

The bottom line is that for $99, you just can’t beat this shoe. Those looking to buy one do-it-all shoe won’t be disappointed. Check them out at www.newbalance.com.