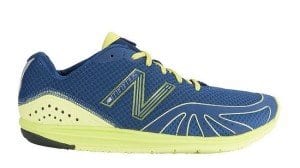 Barefoot running seems to be the craze these days and with so many runners flocking to the idea, New Balance decided with their running background that they would put in their two cents, or two shoes…   In Spring 2011, New Balance Introduces the Mimimus line that has caught the eyes of many wanting to give minimal/barefoot running a try.

Do you find yourself in the category of wanting to try minimal/barefoot running?  I personally think that the majority of runners can benefit from the minimal running movement. Running once or twice a week allows your feet to build up muscles that have most likely been non-existent for the majority runners as traditional running shoes don’t allow your foot as much flex, therefor not allowing the foot develop as much muscle. 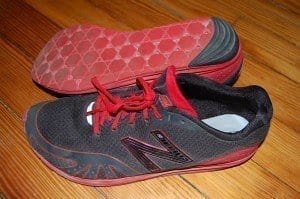 One of the big differentiators in this shoe versus a standard running shoe is the heal to forefoot drop.  In the New Balance Minimus MR10, the drop goes from 11 mm in the heal to 7 mm in the toe.  This is a drop difference of 4mm.  The standard drop in most running shoes is 12mm from heal to toe. What does this all mean?  The beefed up foam in the heal usually encourages heal to toe running which is not the most efficient way to run.  The more efficient way to run is to strike on your midfoot and then transition and spring off your toe.  On a longer distance run, this is harder to do as your legs begin to get fatigued and its easy to fall back into the heal to toe foot strike movement. 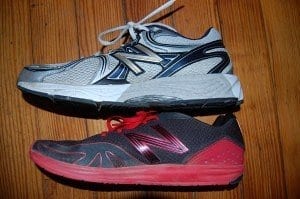 All shoes in the New Balance Minimus line are under 8.2 oz. for men and and women.  This is far less than a traditional running shoe that typically weighs an average of 12 oz. One of the ways in which the Minimus line cuts weight is by removing the footbed liner.  I haven’t found there to be much of a difference as far as cushioning and comfort goes though.  The toe box in the Minimus MR10 is a little wider which allows your toes to naturally splay a little wider than the standard running shoe.  I tested out a size 12.5 and found the shoe to fit a little long, so I suggest trying the shoes on before making a purchase. 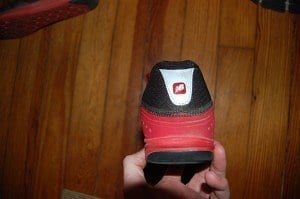 I’ve been running in these shoes for a few months now and although I am not completely switching over to the New Balance Minimus MR10, they do end up in the mix of running shoes I wear during any given week.  In the end, I think New Balance has taken a step in the right direction for those interested in minimalist running, So if you are looking to transition to or give minimalist running a try, I would highly suggest taking a look at the New Balance Minimus line.