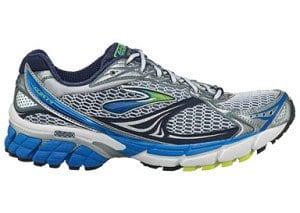 In the race to strip down, rethink, and re-innovate shoes to fit the barefoot movement, some companies seem to have lost sight of that one simple fact. Just get out there and run happy. Brooks hasn’t forgotten that some people don’t want to jump on (or off, rather) the barefoot wagon. With the Ghost 4, Brooks has proven that neutral shoes can still have cushion and structure…. yet still feel free. And they do it without upping the price tag – the Ghost 4 still retails at $100.00. Most of the barefoot line up (regardless of brand) RUNS (ha-ha) more than this. Fad? Possibly. Wanna run happy? Come back to Brooks.

Let’s start from the bottom up. I love the Ghost for longer runs, especially anything over 13.1 miles. I trained for a marathon in the Ghost 3’s purely for this fact, and look forward to training for another in the 4’s. Not only does the rubber hold up well over distance, it holds up well over the life of the shoe. I’ll admit that I’m not the biggest fan of plastic crossbars in an outsole (I’ve railed on them in numerous reviews here) but in the Ghost they aren’t noticeable, even after a couple hundred miles in them. It’s called HPR plus, and whatever you say about it, you can’t say it isn’t just about the most durable compound you’ve ever run in. 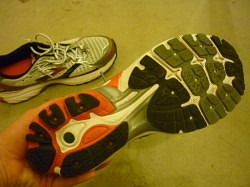 On top of being durable, it was fairly grippy, too. It handled those wetter runs with ease.

Typically, the more durable the outsole, the more inflexible the ride. Durability doesn’t come without it’s drawbacks in terms of malleability, and the Ghost is no exception to this. I’d love to say that there’s some sort of magical compound out there that feels like a leather mocassin but runs like vibram, but there isn’t. What Brooks has done with the Ghost is add a “Cush Pad” configuration to the shoe. This, combined with the patented Brooks “DNA” system, allows for the comfort factor to sink in. Increased structure can tend to feel restrictive on the road, but this combination of features is superb. I thought the shoe felt light and fast enough to do all sorts of workouts – from track workouts to longer tempo runs, I found myself reaching for the ghost fairly often. A quick note about the midsole, though – some runners tend to feel a pressure zone in the ball of their feet. It didn’t seem to occur in our women testers, but it did occur in at least one of the men. I didn’t feel it at first, but after my attention was drawn to it, I noticed it. It’s almost as if the shoe has an upward swell in between the largest “ball” of your foot and the next toe over. I liked how it kept the shoe feeling balanced during a forefoot strike, but those with a different stride might not appreciate it. 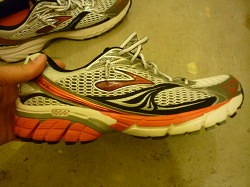 So what if it isn’t the flashiest shoe around? I’m not Usain Bolt, and I don’t pretend to be 😉

Last, but not least, the upper is super breathable, and the sockliner is really, really comfortable. I don’t tend to run sockless in any shoe, so it wouldn’t be my recommendation here, either. I get blisters too much to run sockless, so I can’t say for certain how the sockliner would fare. It was extremely comfortable with socks on, however, and was comfortable enough to wear around all day. I took these on quite a few “hot” runs (runs in temperatures approaching 100 degrees) and my feet were actually the most comfortable part of my body. I like how the sockliner feels cushy without causing extra sweatiness to occur.

The bottom line is that the Ghost 4 is a go to shoe for multiple runners. While it may not be the “best in show” for any specific category, it’s broad appeal makes it any easy sell for many a runner. It’s a great choice for those sorts of trips where you don’t know how long your runs will be, or whether they’ll be indoor or outdoor. It’s built for the long haul, yet is supple enough for all sorts of training. In this price range, it might just be my favorite choice. Run happy? Thanks to the Ghost 4, I will.

For more info on the Ghost 4 and other Brooks footwear, visit www.brooksrunning.com.