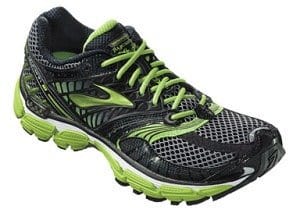 Neutral shoes can be a lot of things. Some neutral shoes are designed for the fleet footed – energy efficient runners who skip along the road, hardly seeming to touch the ground. Some neutral shoes are tanks – they plow through just about everything you put in front of them, and no matter how tough the going gets, the shoes get going. Just one look at the Brooks Glycerin 9 tells you exactly which category these fall under. They’re big, they’re reinforced, and they mean business. Put them on your feet, and you find out just what kind of business they mean – needless to say, you’ll quit long before they do.

I’ve been a big Brooks fan for quite some time. I broke into the line up with the Ravenna, and haven’t looked back since. Brooks has a great design base going, and they don’t really need to change it. If it ain’t broke, don’t fix it – and Brooks hasn’t broken yet. Every pair I test I end up using to run some sort of long distance race (I’ve run all my marathons in Brooks), and every pair ends up getting around 600 miles on them before I have to even think of giving them up. For a track record (no pun intended) that really isn’t all that bad. So it was no surprise to me that the Glycerin 9 was built to go the distance. And by built, I mean built. Since we’re already talking about the construction of the shoe, I’ll go a bit out of order, and start with the feel of the midsole/upper combination. 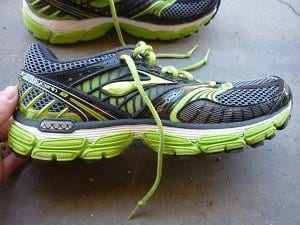 An added bonus – it might just be the coolest looking shoe in the lineup this fall.

It wraps snugly around your foot, and right away you can tell that even though it’s a neutral shoe (meaning lack of whats Brooks calls Guidance – essentially another name for correction of your foot’s natural pronation), it’s not going to just waffle around without any support. It’s extremely supportive, to the point of being almost restrictive. If it didn’t feel so cushiony on the inside, it would feel fairly restrictive. Which leads me to my first beef with the shoe, actually. It’s so cushiony, you lose a little bit of feel for the road. I loved running in it for long, steady runs. Especially on flat terrain, where pace wasn’t changing, and there was no dynamic movement. The cushy feeling of it was great – but anytime dynamic pace changes are a factor (think fartleks or track workouts), I felt like I was in danger of breaking an ankle. The key to this has to be the extension of Brooks patented DNA system from roughly half the shoe to the whole shoe, as evidenced by their site. Due to this, it tends to lack rebound as well. While heavier footed runners will really appreciate it, I’d say anyone under 200 lbs will feel that it’s just too much. 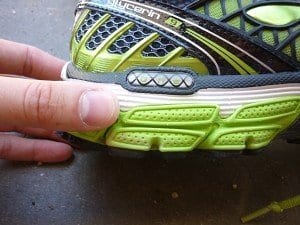 The DNA systems runs the length of the shoe.

The upper is more evidence that the shoe is built to hold up through just about anything. It’s reinforced in several areas with a construction that includes heavy duty mesh, solid panels, and even plastic webs running around the forefoot. This plastic web that hugs your arch for a secure fit is the main reason the shoe feels so supportive. I liked this portion of the shoe a lot, as it kept my foot in place, and I had no issues with shifting around like several shoes will. I really appreciate a secure forefoot in order to prevent blisters on any run over 6-7 miles, and the Glycerin had that in spades. It was really breathable, too, which shoes that Brooks really knows what they’re doing in terms of R&D – they aren’t gonna send you out with a shoe that causes swamp foot at mile 20 of a summer marathon. I stayed nice and dry through all but the hottest of my testing runs.

Securely wrapping the mid foot, the plastic web extends throughout the entire upper.

Last but not least, the outsole is constructed with the same idea in mind. When bullet proof construction is the name of the game, Brooks goes with their HPR material. To quote the website directly, it’s designed to be ” higher durability abrasion resistant” material that “wears longer.” In practice, it really does just that. After quite a few test runs in them, there wasn’t really all that much visible wear in them. I have every confidence that these shoes would go the full 600 miles and possibly even then some. What I really like about the outsole construction, however, was how it rolled on smooth pavement. Numerous shoes that feature a plastic set of exposed beams have issues with contact points, and feel very clumsy. Not so with the Glycerin 9 – it smoothly rolled from heel to toe, and provided great traction for a stable toe off.

The bottom line? Heavy runners seeking a stable neutral shoe need look no further. Fleet footed runners may feel that the cushioning is just a bit overdone. Check them out at www.brooksrunning.com