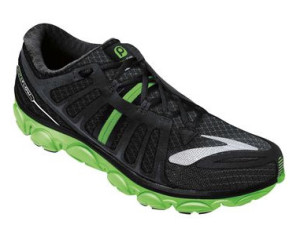 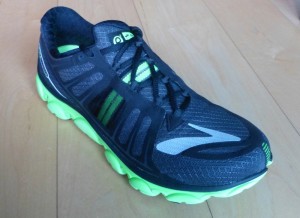 One year ago, I reviewed the initial Brooks Pure Flow (click here to read my review of the Pure Flow v1), which became perhaps the most consistent player in my shoe rotation. The Pure Flow, perhaps the most successful of the 5 models in Brooks’ Pure Project line (with the new Pure Drift – review here), has been duking it out with the Kinvara/Virrata for dominance in this segment over the last couple years and holding its own.

This model is a neutral, well-cushioned high-mileage trainer with a nice wide base which gives it good stability for a natural running neutral shoe. Many brand new models get a significant revision in their sophomore iteration but the first Pure Flow was such a success that Brooks maintained the midsole and outsole completely from the first version. The Pure line’s combination of DNA and BioMoGo midsole material, at a generous 22mm in the heel and 18mm in the forefoot, makes for some of the most comfortable yet responsive running shoe midsoles on the market. The Flow rides soft and comfortable on slower long runs but somehow the same shoe feels firm and responsive when the pace picks up, making it a great shoe for those that like to stick to one model for everything. The Pure Flow’s midsole includes another Pure signature feature, Ideal Heel geometry. The heel, rather than extending rearward, is rounded up around the back of the heel. According to Brooks, the feature functions to move the heel strike point forward a centimeter or two, encouraging midfoot striking. 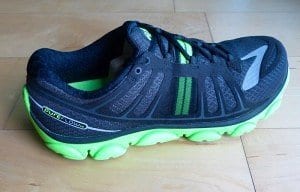 Though the midsole and outsole of the Brooks Pure Flow 2 remain unchanged from the first Pure Flow, the upper has undergone a complete re-engineering. The lacing system from the first iteration was known to generate a bit of uncomfortable pressure on the instep, so Brooks has built asymmetrical lacing into the Pure Flow 2. This system integrates with the structural overlays which are welded to the upper mesh to adequately lock down the midfoot but eliminate pressure points on the top of the foot. The traditional tongue design from the first iteration of the Pure Flow has also been scrapped in favor of the ‘burrito tongue’, as it seems to be known now. The upper material on the lateral side of the shoe wraps up over the top of the foot and under the medial side’s upper material. The result is very comfortable and eliminates almost all tongue migration and any related hot spots. The elastic ‘nav-band’ which connects the medial and lateral walls of the shoe is a signature design and structural element common to all the Pure Project shoes. Though I don’t feel it brings any functional benefit to the shoes, it doesn’t detract at all from their performance. Upper overlays are welded to the mesh body, creating a smooth, seam-free interior that eliminates friction hot spots. The upper mesh is consistent throughout the entire upper and rather closed and could breathe better on hot runs. The heel counter of the Flow is quite substantial as opposed to the unstructured heel wrap of some minimal models, making it a more stable and supportive option among other neutral ‘natural running’ shoes. 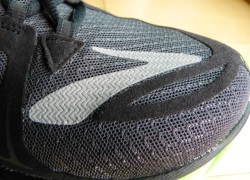 Safety via reflectivity is great on the Pure Flow 2 with reflective elements wrapping the heel cup and a large reflective Brooks logo on the toe of the shoe.

I personally prefer flats or spikes over shoes with more midsole like the Pure Flow for track workouts but aside from that I tested the Pure flow on interval workouts all the way up to long runs of 16 miles, and it shined every step of the way. As was the case with the Pure Flow 1, the Pure Flow 2 remains my go-to daily trainer and I think it has huge potential for neutral runners looking for a versatile shoe. Brooks did raise the price of the Flow $10 this year to $100, but it is still a good value at that price in a time when decent shoes under $120 are becoming rare. 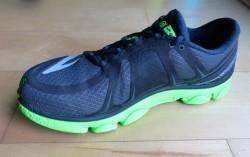 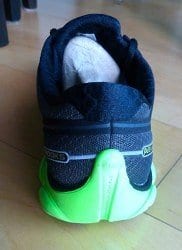 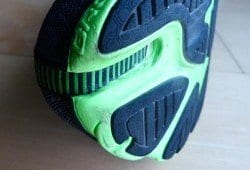