Last years Ravenna was one of the first shoes to build a bridge between neutral shoes and stability shoes. Brooks rightly guessed that there were those out there who only needed a little pronation control as opposed to a complete and utter correction of pronation. Their goal was also to cut weight without sacrificing overall performance. In the Ravenna 2, Brooks continues their success with a medium stability, lightweight shoe designed to go long distance. Having trained for a marathon in the Ravenna 1, I knew the first iteration of this particular Brooks shoe fairly intimately. The second revision does not disappoint, and certainly comes in better colors. Thanks for that, Brooks, because frankly the colors on the first one made me feel like Ronald McDonald. The new color below up close. 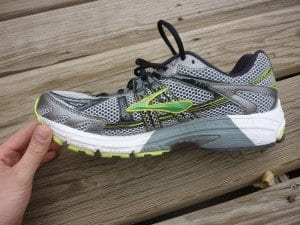 No, I don’t want fries with that.

This year the main update is Brooks new DNA system. It’s designed to break in according to each individual running style without sacrificing comfort and durability. I’ll let Brooks tell you about it more, as they put together a clever video here: https://www.brooksrunning.com/. I’ll just say that it really feels about the same as last years model, but just a bit longer lasting. My only complaint about last years Ravenna was that I got less mileage on them than comparable shoes – this year due to the DNA it doesn’t feel as if it’ll be a problem. 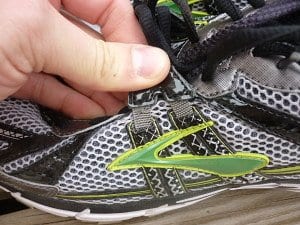 The mesh upper remained similar to last years model (and most of the Brooks line up) as well. It breathes well, but provides a very secure wrap around the mid foot. What was interesting here was the addition of two gussets attached to an adjustable strap around the forefoot. At first, I was very dismayed to see this, and didn’t feel as if I could get a secure fit in them. After a couple of runs, I realized I was very wrong. This addition, seen below, allows you to securely tighten the shoe without creating pressure points around your instep. After a bit of adjustment, it was very comfortable. 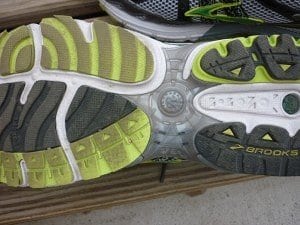 My only complaint about this shoe is the exposed torsion bar in the outsole. This shoe is definitely suited to those who heel strike, and didn’t ride well with a forefoot strike due to the placement of these bars. When rolling from heel to toe, these bars weren’t an issue, and actually did what they were designed to do very well – slightly combat pronation.


Overall, if you only suffer from mild overpronation and want a quick feeling shoe that will go the long distance, look no further. There really aren’t many competitors to this shoe yet, and when there are, Brooks will continue to stay one step ahead of them. Check them out more at www.brooksrunning.com.
Brooks Ravenna 2 Mens Running Shoes
Brooks Ravenna 2 Womens Running Shoes