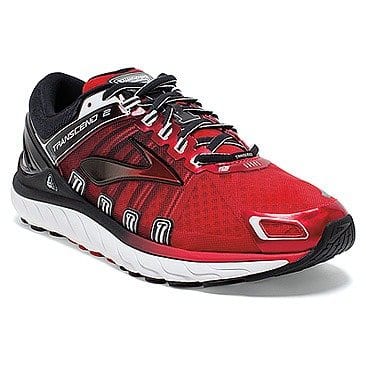 ‘Less is more’ – that’s how the old saying goes… but what if it isn’t? What if more is truly more? Brooks set out to disprove the old colloquialism with the newly updated for Spring 2015 Brooks Transcend 2. With all the bells and whistles (and then some) who could ask for anything more?  From the bottom to the top, Brooks sought to provide runners with the maximum amount of well, everything – with the exception of heavy weight and a clunky ‘I don’t know where the road is’ feel.

We had the Brooks Transcend 2 for testing on runs of varying lengths, surfaces, and temperatures (thanks Colorado), and definitely were able to put it through it’s paces. Here’s what my take on it was after nearly 30 miles of testing. 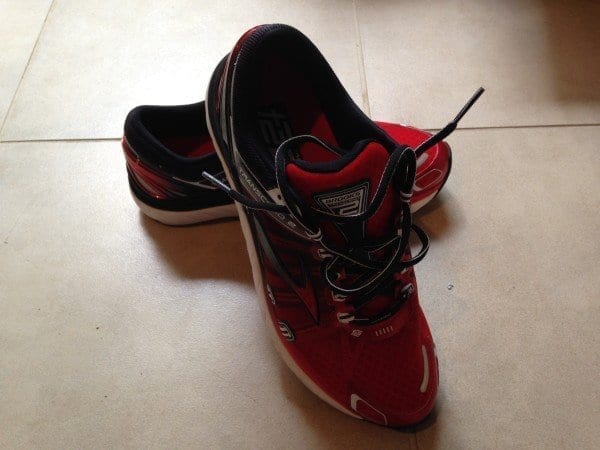 The Brooks Transcend 2 looks fast right out of the box.

Initial thoughts on the Brooks Transcend 2

Right out of the box, the Brooks Transcend 2 promised to be an interesting addition to the world of running shoes. Full disclaimer – I didn’t test the Brooks Transcend 1, but in looking at the two different offerings online, I can tell you that Brooks is following a growing (and vocal) segment of the running world which were fairly disappointed to see that shoes were being reduced to paper thin slippers without any regard to cushioning or comfort. Both offerings (The Brooks Transcend and Brooks Transcend 2) rely heavily on cushion, stability, and a smooth heel to toe roll.

What makes the Brooks Transcend 2 interesting is that Brooks has (in the past) not attempted to go too overboard following the latest and greatest running trends. The Brooks Transcend 2 appears to give the nod to runners who want all the cushioning and protection that a running shoe possibly could offer. It looks to be a straight across competitor to companies such as Hoka who offer the maximum in cushioning and support. Interestingly enough, though, the toe heel drop here in the Brooks Transcend 2 is 8mm – this used to be a middle of the road sort of drop, and now is close to the maximum offered by most running shoe companies. This represents a departure from where the maximum cushion type of shoe was even a few years ago. 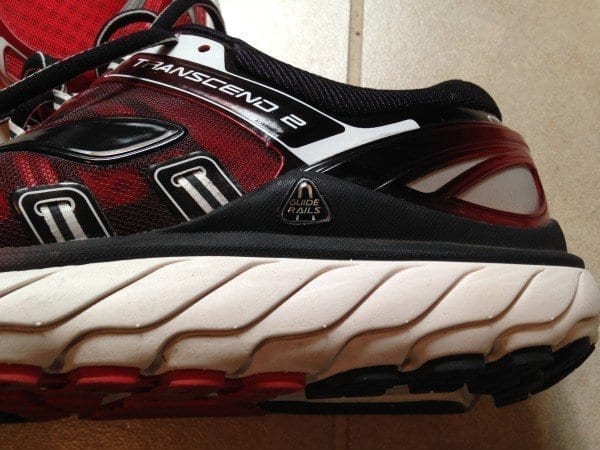 The shoe doesn’t feel clunky, and appears to have slightly less heft than other shoes have in the same category. At a weight of 11.9 oz, it’s no skinny minny, but it’s certainly no beast either. It’s a nice middle of the road offering, and at first glance doesn’t have the downside of looking like a total marshmallow (you all know what I’m talking about). The sleek styling of the Brooks Transcend 2 might be the best I’ve seen (or tested) in the world of overly plush running shoes, which will really please runners. You may be an Athena or Clydesdale, but why would you want to look like one?

The initial fit was not surprising in the slightest – Brooks has a very distinctive last which either fits you or it doesn’t. The Brooks Transcend 2 does not stray THAT far from the tried and true Brooks model that it would change up something so significant as the shape of the last to attract new buyers but alienate it’s rabidly loyal followers. I’d say that it’s even closer to the traditional Brooks last than the Brooks “Pure” lineup (tested most recently here by yours truly), and follows much of the same attributes you’d find in any of the other shoes Brooks has to offer. What immediately distinguished it from those was the silky interior and plush feel – this was evident the first time I slipped them on to walk around the house. To be honest, walking around the house felt a bit clunky – they felt overly plush but a bit restrictive at the same time. My first run out of the box was to be a 12 mile training run, so I wasn’t in the highest of spirits when I slipped out of the house the first morning. I expected blisters from the slick inner materials, and pain from the restrictiveness of the shoe. 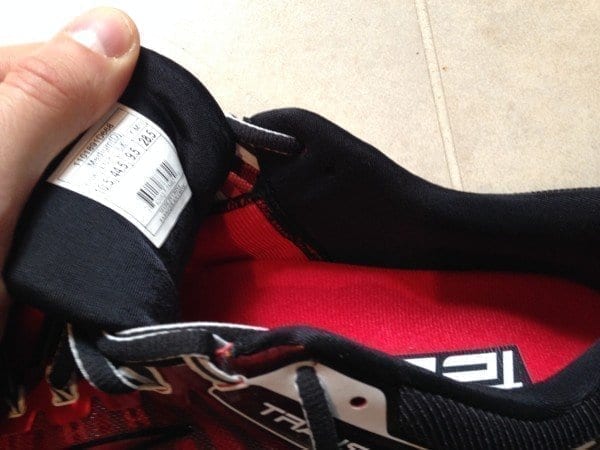 The interior of the Brooks Transcend 2 is silky smooth, and oh so comfortable.

I’m happy to report that over several runs (the longest of which being that initial 12 mile run, which wound up being a bit over 13 miles due to a slight miscalculation between google maps and my gps watch), neither of these things were true. I developed no blisters, and actually grew to really love the silky smooth interior of the Brooks Transcend 2 – nothing I’ve tested this year has been quite like it in terms of sheer comfort. I hope Brooks intends to use this material in other offerings, because the guide rails really do lock you in place. I didn’t get any severe pain from the guide rails, but I can tell you one thing – they are built for runners who are a.) a lot heavier than my 158 lb frame or b.) need a lot of stability in their shoes. Despite what all the natural gurus would have you believe, there is still a segment of the population who overpronate, and do need some correction for this. The Brooks Transcend 2 offers this correction, and in spades. I believe heavier runners will be delighted by the amount of correction in the Brooks Transcend 2, but I was slightly over powered by it. By the end of my 12 (13) mile run, I found myself with all of the twinges associated with having to much correction to my running stride. Go nuts if this is your thing – you’ll love it.

The restrictiveness I felt in my first try on quickly packed out as my first run progressed, and I found myself stopping to tighten up mid way through the first run. After this initial tighten up, I had no more issues like this, and felt comfortably locked in place without any discomfort. I do suggest tightening these a bit more than your average shoe, as the silky interior did allow my foot to slide a bit on downhill stretches, causing some toenail bruising. This was easily corrected after the aforementioned tightening, but is a factor, especially for those who run a lot of hills. Speaking of hills, I was fairly surprised at how smooth the shoe was over them. Typically, a shoe with a drop as large as 8 mm will feel slightly clunky on a downhill stretch, especially when utilized a mid-foot strike. I didn’t really feel this at all; both strides felt equally smooth in the Brooks Transcend 2. I say equally smooth in that they both were smoother than average; clearly, this shoe is designed with a heel striking runner in mind. The fact that it smoothly reacts to a mid-foot strike, though, is great because runners seeking to improve their gait can begin their transition here – and not sacrifice comfort and protection to do so. This is first shoe I’ve tested where both strides feel fairly comfortable. Brooks is clearly listening to runner feedback, and continues to innovate with the runner in mind. 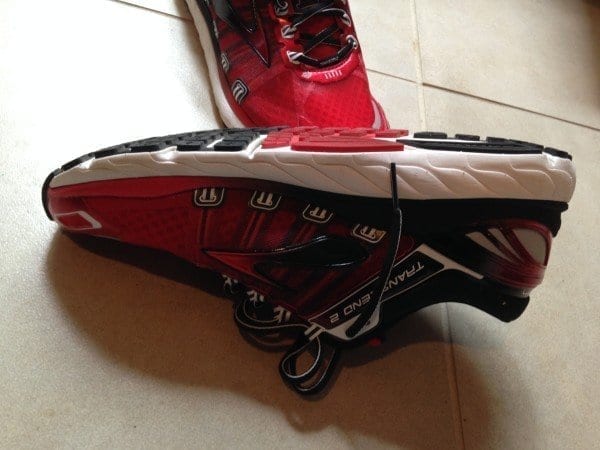 The smooth outsole on the Brooks Transcend 2 allows for smooth transition on multiple types of foot strike.

In terms of cushion, I believe the rest of the review hinted very strongly at what I’m about to say here – the shoe is plush, but doesn’t feel that connection to the ground that I’ve come to know from the entire Brooks lineup. I ran a full marathon in the Brooks PureCadence 3, and I can tell that in terms of really feeling where the ground is, the two don’t compare. But in terms of feeling like each foot strike is well placed, efficient, and steady – nothing really compares to how Brooks does it. This is the most heavily cushioned shoe I’ve ever tested from Brooks, which is why I think that even though the shoe is listed for all body types and builds, it will be favored by larger runners. Second to that, of course, is runners seeking a ton of pronation correction. Having been heavy when I began running (topping the scales at just over 210 lbs), I can definitely see this being an attractive offering, despite the high price tag of $170.00. It is important to note, though, that this is not out of line for the shoes it is competing against – there are no heavily cushioned shoes such as this on the market for much less than this price point. For the shoe type, quality of build, and overall feature set – it’s priced competitively.

Final Thoughts on the Brooks Transcend 2

Despite the hefty price tag associated with this type of shoe, the Brooks Transcend 2 will definitely be a go to shoe for the Clydesdale/Athena segment of the population who want maximum cushion and support… but want to look and feel fast. The updated styling is different from any other shoe in this market, and delivers on the promise of going long while offering the maximum in all areas. The silky smooth liner and mesh upper provide for the utmost comfort, and even though the shoe is packed to the gills with cushion and pronation correction, it still manages to come in at just under 12 oz a shoe. It’s really a testament to how much Brooks cares about it’s customers, and how successfully they’ve put the needs of their runners into R&D. Brooks really delivered on the Brooks Transcend 2. Head on over the Brooks website to check them out for yourself, and make sure to make use of the “show me how it fits” tab to compare them to your current pair of running shoes. Cheers.