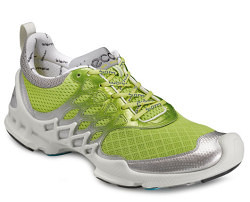 Biom – dare to be looked at. But don’t fall over.

Ecco. Not the first name that comes to mind when the words “running company” are uttered. Yet any time a company puts a running shoe on the market for $195.00, you have to believe that they are attempting to make a play at becoming that name. If not the first, at least in the top 5. As our review of the Ecco Biom B suggests (check it here – https://www.activegearreview.com/running/road-running-shoes/mens-road-running-shoes-running-gear-reviews/ecco-biom-2-2-review ) it’s hard to wrap your mind around the sticker price. I don’t tend to bat an eye at higher priced running shoes – indeed, it’s quickly becoming the name of the game – but for a fairly unestablished name in the running market? Bold move, Ecco. I absolutely agree with the assessment of the biom line as a sort of “barefoot” shoe. In fact, Ecco certainly is marketing it this way. I disagree with Ecco just a bit on the transition, however. It may be flashy and tempting, but I’d hesitate to call it a gateway shoe into the world of running. Read on to find out why. 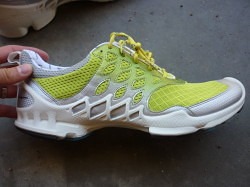 Check out that curb appeal…

To begin with, I realize the “A” is not the “B” and vice versa. The reason I draw the comparison is because you have to start with the intent of the Biom line as a whole to understand the direction that Ecco is taking with this shoe. Biom (short for biomechanics, we’re to assume) is billed as a “welcome” into the “age of natural motion.” I’m all about natural motion. I preach it all the time. There is a difference, however, between learning to strengthen your muscles in a more natural gait, and just flat out jumping into a barefoot shoe. The website doesn’t seem to make the distinction, but the box of the shoe certainly does – it comes with a pamphlet telling you how to run in them (there’s more on that later.) The bottom line, Biom feels like a barefoot shoe. 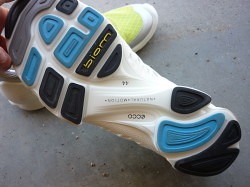 The flash extends into the outsole.

The feel of the shoe as a barefoot runner comes largely from the outsole, midsole, and shank of the shoe. Granted, the A is billed more towards the “competitive” runner than the B, but the construction is remarkably similar. A TPU rubber outsole (selected for endurance, and decreased weight at the suggested density) start the shoe from the ground up. I like how it felt firm under a forefoot strike, and didn’t seem to lose traction in a variety of conditions. It felt the best during track workouts, as it seemed to rebound more than your average shoe. I really enjoyed sprinting in this shoe. The midsole and shank construction is pretty much the same here as in the B – cut down the size of the shank, and thereby increase natural motion. It felt a bit unbalanced at first, but after a few days of varied runs, it felt slightly closer to natural.

The outsole and midsole, however, isn’t what’s going to attract most people to the shoe. It’s just about the flashiest shoe I’ve tested, and I’d imagine the sheer “curb appeal” of this shoe will draw quite a few consumers to it. It certianly looks more complicated and “technical” than any other shoe on the shelf in most running stores. The flashy look comes from the lime green color, webbed plastic and mesh upper, as well the shiny toe bumper up front. Granted, it does look cool – but in my opinion, more in that “I work out at Pura Vida” sort of way than in the “I run barefoot marathons” sort of way. I’m not saying I disliked turning a few heads, but in practice, I didn’t feel that the upper performed any better than your average running shoe. It worked to keep my feet cool and dry in hot conditions, and I like that.

There is a bit of confusion in the design of the shoe, however. It’s makers seem to intend it to be a go to shoe for runners wanting the less is more feel, but with all of the tech included. They shy away from the term “barefoot” in lieu of the term “natural.” If that really is the case, they why put all the effort and construction into the heel of the shoe? The heel was really my only dislike of the whole shoe – it felt a bit awkward, like it wanted me to land on it, but didn’t want to promote a heel strike. I’d agree that once I started to focus in on it, it was probably largely in my head. But once I noticed how odd the heel felt (each strike was accompanied by a disconcerting thunk when transitioning) I couldn’t stop thinking about it. Luckily, most of the testing in this shoe was done with a forefoot strike, and this was sort of the last p 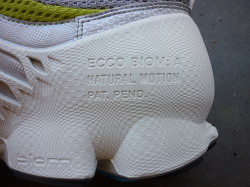 little bulky in the heel…

Now, as for the aforementioned packaging. Ecco (very nicely, in fact) includes a tip sheet inside the box for how to learn to run in the shoe. It’s actually very well done, well intended, and gives good knowledge on a progressive approach to running. Read that word again – progressive. It can mean forward thinking… and it can also mean building. In this case, it definitely means the latter, not the former. It advises the runner to ease into running in these shoes, and encourages the runner to wear them out walking around, or around the house in increasing time increments each day. Don’t be fooled – just because it’s a smart approach doesn’t mean Ecco came up with it.

With so many contradictory view points in one article, you might just be wondering what the bottom line is. Overall, I wasn’t as impressed as I wanted to be with a $195 shoe. At that price tag, you have to be geared to impress, and the Biom A falls just a bit short. It felt fleet and light on the track, fast enough to race, and was flashy enough to catch the eye. But in practice it was always just a bit off balance. If you’re looking for an addition to a fleet of shoes that impresses with curb appeal, look no further. But as a transition into barefoot running I’d say look just a bit further. Go check them out a https://us.ecco.com/.