Hoka One One Bondi 4 Review 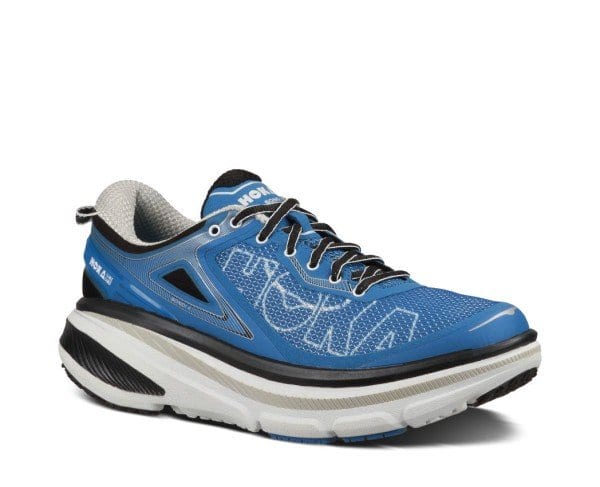 The Hoka One One Bondi 4

We’ve all seen them out there – whether it was at a race, the gym, or just running around your favorite park/trail system, they were guaranteed to turn your head. Perhaps you saw them in profile, and wondered just what the heck was going on with the sole of those shoes. Perhaps someone at your local running club showed up and was suddenly two inches taller. What I know is that it doesn’t seem to matter where you first saw them – now you’re seeing them (and possibly the Hoka One One Bondi 4) just about everywhere.

Hoka One One got it’s start late 2009, and began marketing it’s “ultra” cushioned midsole style shoe to ultra runners and other long distance fanatics – designed to provide cushion over the long haul, the idea behind the shoe basically completely contradicted the prevailing attitude in the running world at the time. When every company around was marketing their bare foot inspired “less is more” sort of shoe, Hoka One One decided to say “more is more” … and more, and more. Since it’s inception, Hoka One One has expanded to the point where now they have a “more is more” type of running shoe for everyone. Who says ultra runners get to have all the fun to themselves? When the good folks at Hoka One One decided to let us take a spin in the Hoka One One Bondi 4, I decided I wanted in on all that fun – here’s what I thought when I hit the pavement (or didn’t – read on to see more). 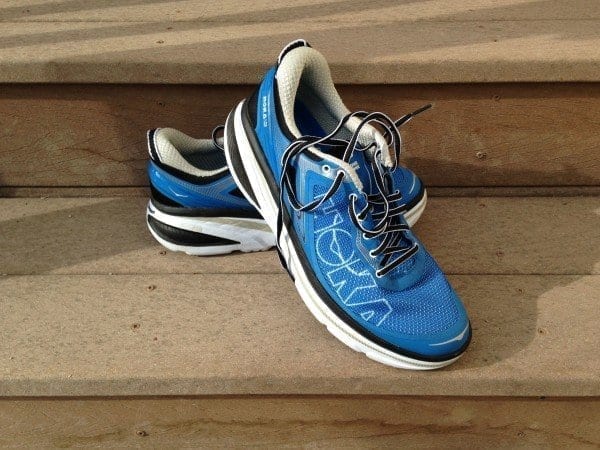 The Hoka One One Bondi 4 – check out the cushion on these bad boys!

Initial Thoughts on the Hoka One One Bondi 4

Over the years of testing for ActiveGearReview, I’ve seen quite a few shoe trends come and go. Some trends have the ability to stick around for the long haul, and others fizzle out fairly quickly. When I first saw what Hoka One One was doing, I thought they were a bit crazy. It made sense to me to have ONE offering in your shoe line up with a bit of over cushioning – but to base your ENTIRE lineup on it seemed absurd. You have to remember the time period as well – I was standing there in a pair of low slung barefoot shoes, sockless, and feeling the pavement beneath my feet beginning to get just a tad too warm for my comfort when a dude rolls by in these ridiculously stacked shoes – grinning from ear to ear. Looking at the Hoka One One Bondi 4, you’d assume the guy was 6 and half feet tall and weighed 260 lbs – a true clydesdale. Nope. The guy was just shy of coming up to my forehead (and I’m 5’10”) and had to weigh 145 dripping wet. Dude was an awesome runner – and just loved hittin’ up major distances (anything longer than 30k) in these new Hoka One Ones. Fast forward nearly 6 years, and not only is the Hoka One One Bondi 4 an excellently selling shoe, but Hoka One One as a company seems to be growing by leaps and bounds. They are winning awards from just about everyone you can think of, and have a growing group of extremely avid runners who refuse to wear anything else. 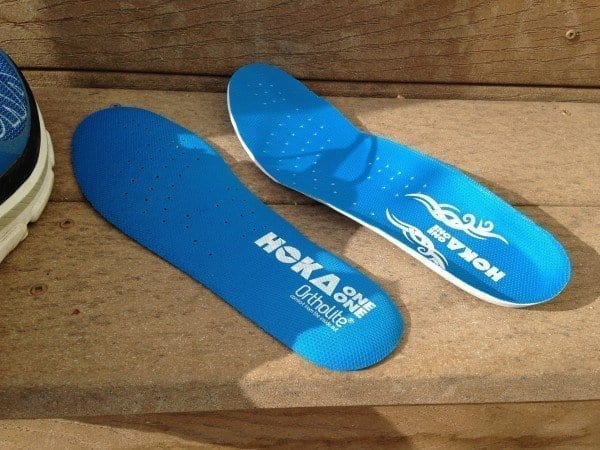 The Hoka One One Bondi 4 comes with two sets of insoles for a customizable fit.

Right out of the box, I expected the Hoka One One Bondi 4 to be pretty much the same as the heavy stability shoes I’ve tested year in and out. Boy, was I in for a shock. The Hoka One One Bondi 4 is lightweight, supple, roomy… and just happens to be absurdly cushioned as well. Just turning the shoe over in your hands, you can feel how the construction was designed to be fast, not corrective. They really do feel just like a race inspired shoe in your hands. So of course I slipped them on – which confused me even more. I have to be completely honest – I felt like I had strapped some pillows to my feet. They felt too high off the ground, unstable, and a bit like walking on swampy mountain flood plain after a spring thaw. They didn’t feel heavy  – on the contrary, they still felt lighter than other shoes I’d tested this spring. But this cushion thing was throwing me for a loop. Interesting to note (and the first time I’ve come across this) was that the Hoka One One Bondi 4 came with not one, but two sets of insoles for the shoe. A little sticker explained inside the box read that one set of insoles was thinner than the other (about half as much, I figured), and could be used separate OR together to make a custom fit. This immediately won me over – things like this just don’t exist much in the running world, and meant (to me) that a real runner actually designed this shoe. I quickly elected to use both at the same time (I’d recommend most runners going down a half size) as even after just walking around the house for a short time, they felt a bit roomy.

Testing the Hoka One One Bondi 4

Over a period of around three weeks, I was able to get just shy of 60 miles in on the Hoka One One Bondi 4 – I used them for long runs of up to 18 miles (I didn’t have anything longer in the training schedule), and even took them into the gym a few times to compare and contrast them against my favorite indoor training kicks. To begin with – not a fan on the treadmill. It’s just so clearly against the grain for these shoes to be on an already cushioned surface that I wouldn’t recommend it. I felt like I’d spring off the treadmill with every step, and didn’t like the precipitous ankle roll that seemed highly likely. It’s simply too much cushion for a surface which is already forgiving and not so solid. I had much the same experience on an indoor track during the same workout. It just felt a bit… off. It was when I took them outside to the pavement that I really got a feel for what the Hoka One One Bondi 4 was designed to do. A disclaimer before a get a slew of reader comments: I know the Hoka One One Bondi 4 is designed for a treadmill. But I thought I’d mention for the reasons I listed above – you can’t ALWAYS run outside. Sometimes you have to run indoors – and lots of runners have only the single pair of shoes for all endeavors. 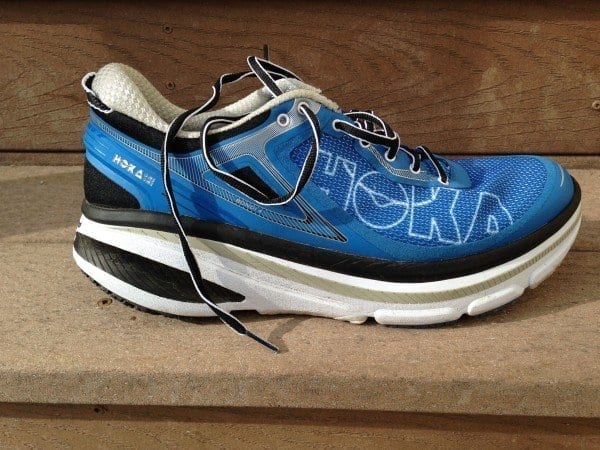 Check out the thickness in the outsole of the Hoka One One Bondi 4 – can you say “plush”?

I didn’t count these indoor miles against the total miles I wracked up on the Hoka One One Bondi 4, as I really wanted to see how the shoe did what it was advertised and designed to do – run long miles on concrete surfaces. If you want an extremely plush and smooth ride, with great roll regardless of forefoot or heel strike – well, look no further. I was actually pretty astounded at just how smooth it felt. As I mentioned above, I’ve never run in a shoe as cushioned as the Hoka One One Bondi 4, and the experience was pretty cool. The instability I’d felt during my ill-fated indoor run evaporated within only a few short blocks. After only a mile, I was running confidently with a long smooth stride. And herein lies the first problem of the Hoka One One Bondi 4 – I felt it encouraged me to over stride. Because I lacked the typical sensation of striking the pavement in a firmer shoe, I unconsciously increased my stride length. This in turn led to some nagging IT band issues during my testing phase. That’s not to say I didn’t adapt during my short testing period, but it is something to be aware of. I had foolishly approached the shoe without proper regard for the fact that when so much plushness is added to the sole of shoe, it creates a need for a different muscular adaptation just to keep yourself upright and moving in a forward direction. Any change in footwear is going to create this need, but the shoe is SO soft that it’s on the complete opposite end of the spectrum from what I’d been used to. My suggestion is this – you need to approach the shoe much the same as you would when learning to run in a barefoot shoe, or race flat. Start with shorter runs, and work up to long distances in them just to give yourself a break in period, and allow your muscles to adapt. 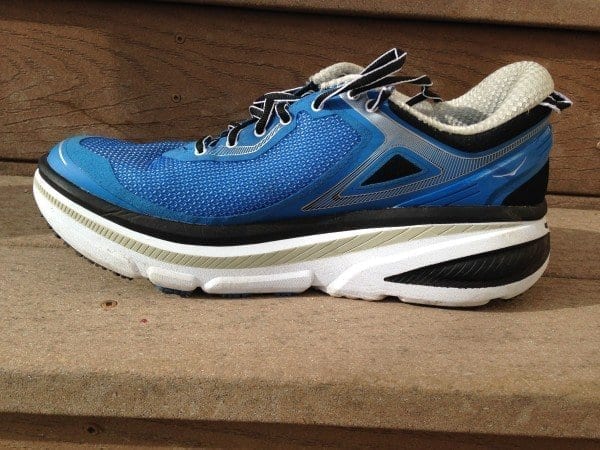 The heel to toe drop in the Hoka One One Bondi 4 is only 4mm.

Another concern of a shoe this plush would be the ability to breathe in warmer conditions. Softer materials tend to soak up both heat and moisture, which could create a very uncomfortable environment for your foot to be in during a race. I had none of these problems in the Hoka One One Bondi 4, and felt extremely comfortable on all my runs outdoors. Granted, I didn’t get a chance to run in hot summer conditions, but I expect they would be very comfortable. The higher heel profile was firm without being overly so, and the lacing structure (combined with the ability to use multiple insoles) kept my foot locked in place without being uncomfortable. A note on this – if I was purchasing the Hoka One One Bondi 4 outright, I’d go down a size from my normal running shoe. It was extremely roomy, which I assume is by design (due to the inclusion of different types of insoles), and I think most runners would be happier with a bit more snugness as the shoe wears in over the long haul. 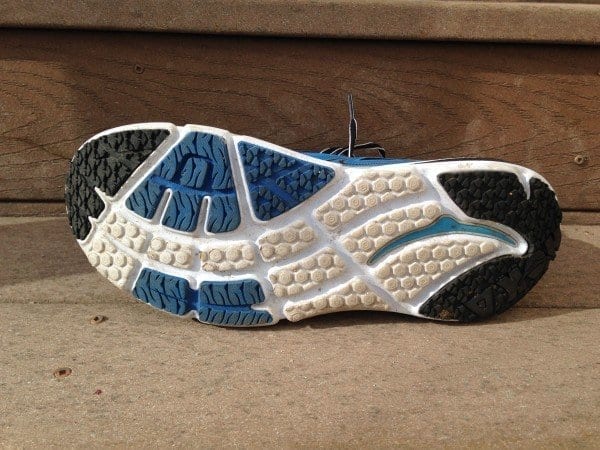 The outsole is grippy on the Hoka One One Bondi 4 but already showing signs of deterioration after 60 miles.

The outsole materials are just a bit on the soft side for my liking – as you can see from the photo above, the outsole is beginning to wear in the white area. I run with a forefoot strike, and the softer material is placed just such that the area where my foot strikes is wearing faster than the more rigid black and blue sections. I believe that after a few hundred miles in this shoe, the wear pattern would be even more severe, and could affect the ride of the shoe. Speaking of the outsole, the “Early Stage Meta-Rocker”  is apparent in the design here. This essentially shapes the outsole of the shoe into more of an ellipse; other companies can claim a smooth foot roll or heel to toe transition, but they don’t deliver like the Hoka One One Bondi 4 does. It really isn’t comparable to anything I’ve run in before, and was noticeable from the first strides I took in them.

Final Thoughts on the Hoka One One Bondi 4