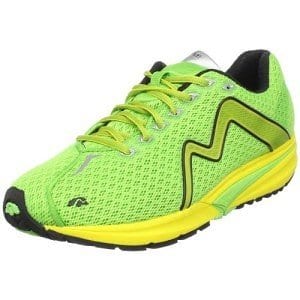 Still new to many runners in the U.S., Karhu continues to broaden its’ reach within the running community, most recently introducing the Fast 2 Fulcrum Ride.  Now if you are not familiar with Karhu, I would suggest taking a look at Karhu.com to see how their specific technology works.  In short, Karhu uses a forward motion technology that guides the foot in a forward direction reducing the need for traditional posting in support running shoes while accommodating neutral runners as well.

Since I test out a number of running shoes and everyone tries to pitch me on how their running shoes are the best thing since sliced bread, I am always a little skeptical of new technologies in the products I test.  Trying to live the American dream, many people try to come out with a running shoe that they think is completely different from the rest of the pack, but come to find out that new technology is inferior or no different from the competition.  When I met with the North American president of Karhu to talk about the shoe technology, I had the pleasure to grill him for an hour on the brands technology and how it differs from the rest.  After our conversation, I was 80% convinced, but I knew that talk is often cheap and so much of product performance comes down to the rubber meeting the road.

After testing out the Karhu Fast 2 Fulcrum Ride, I have come to conclude that the shoe technology makes sense on paper and in the lab, but for the average runner, there will not be a noticeable difference.  In the labs, Karhu found that their technology was more efficient than other running shoes on the market, but I do take this with a grain of salt because these test were conducted on treadmills and tracks.  Most of us don’t run on these surfaces and we end up rickety sidewalks and uneven surfaces where our stride is changing.

Ever since I started running years ago, I found myself trying out all the new shoes and gear I could.  Before officially reviewing running and outdoor gear, I would go into the running store and look for shoes that I have never run in and hope and wish that they would fit right.  Sometimes it would work out and sometimes I would have to hope for the shoe to change the following season.  If you are like me or have any curiosity in trying out Karhu, I highly suggest trying them on and seeing how they work for you.

As for the Fast 2 Fulcrum Ride, I found them to follow the trend of other running shoes this season as they are pretty lightweight.  Weighing in at 10 oz. for men, they are significantly lighter than traditional running shoes.  The upper is made of a breathable mesh that is sure to keep your foot well ventilated.  Unlike many other shoes on the market, the Fast 2 Fulcrum Ride upper comes with a limited number of seems, which helps reduce weight and chance for blisters.  One area in which I would have liked to see more seams is the toe box.  Except for a small patch of rubber on the toe, the toe box is primarily made of breathable mesh.  I personally like a little more form and protection.

Overall, I was happy to test the Karhu Fast 2 Fulcrum Ride, but I am still not completely convinced they are different from the rest of the running shoes on the market.  If you have any interest in trying Karhu running shoes out though, I say go for it!