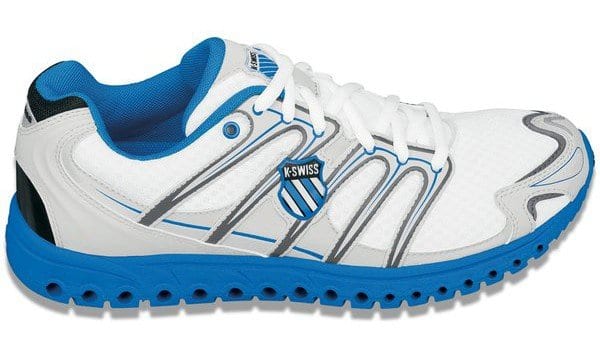 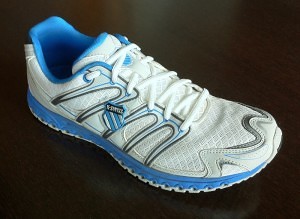 K-Swiss has deep roots in fashion athletic footwear and, in recent years, has been pushing to become a formidable player in true performance running footwear. With their ‘Tubes’ line of shoes, I think they’re attempting to bridge the gap. The new K-Swiss Microtubes 100 Fit running shoe is an outstanding value at MSRP $80, looks great, and packs a good bit of performance for those bucks. The concept with the Tubes line is that the midsole base is composed of hollow tubes of rubber that ‘squash’ to absorb shock on footstrike, then rebound to propel the runner forward. The idea is basic physics and works quite well. Recently, K-Swiss has introduced ‘microtubes’ models with smaller tubes that provide the same cushion with a more responsive ride.

We don’t receive a great deal of information on K-Swiss models, but it seems that they are shooting for a low-drop, natural-type running shoe with the 100. The heel height is not much higher than that of the forefoot which works very well for those with a mid to forefoot strike. At 10 0z., the 100 is light for a daily trainer, and the midsole offers great cushion, as our testers used this shoe on tempo runs all the way up to 16-mile slogs, and they felt great. The Microtubes 100 has some non-hollow tubes on the medial side which serve as a post of sorts, but our testers reported that the agressive profile of the mid and outsole (see photo at right) made even our neutral runners feel like they were pronating. Perhaps a bit more material under the midfoot and arch would solve this issue.

The upper mesh is very open and our testers reported that it ventilates well. The reinforcing overlays that wrap the saddle of the shoe are a rather stiff plastic and provide a very secure fit, but because the lacing system extends down toward the toe past the flex point of the shoe, some testers reported irritation on the tops of the toes from the stiff reinforcements.

Overall, we were impressed with the value presented by the K-Swiss Microtubes 100 Fit, and would recommend it for efficient, midfoot-striking runners looking for a lightweight tempo shoe.

For more information on the Microtubes 100 Fit and other K-Swiss footwear, visit www.kswiss.com.