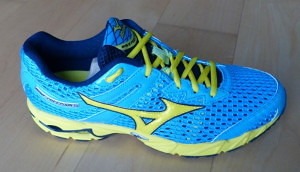 Mizuno is a company with a tradition of making natural-running style shoes long before they became a hot trend. Their core technology, the wave plate, is a simple piece of technology that Mizuno has tweaked over the many years they’ve relied on it and it only varies a bit from model to model. Mizuno will finally be stepping into the barefoot/minimal running shoe game for real this spring 2013 with their “Evo” models, but they have always been a favorite of the less-is-more crowd. We at ActiveGearReview.com have some past experience with the Precision–read our review of the Mizuno Precision 12 here. This time around, we are reviewing the 13th iteration of their Precision line. Yes, Mizuno knows how to stick with a successful model and keep the fans coming back year after year. 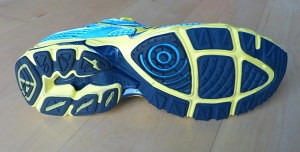 The Precision is Mizuno’s high-mileage neutral trainer geared toward speedier, more efficient runners. However, the Precision 13 is not a next-to-nothing sock with a rubber sole, it boasts a healthy amount of cushion and protection for long hauls. 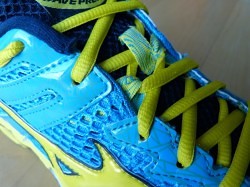 Mizuno is known for great fitting, super-comfortable uppers, and the Precision keeps up the tradition. The base of the entire upper is a nice open AIRmesh that ventilates well on hot runs and feels secure where you want security but a bit stretchy in places like the toebox where you want more freedom. In addition to great performance, the upper mesh, in combination with a glossy synthetic overlay material, shed dirt well and looks virtually new after 50 or so training miles. Closer examination reveals reinforcing straps under the mesh that connect the lacing system to the base of the shoe. This combination does a great job of locking down the midfoot but allowing the forefoot and toes room to move. The reinforcing straps come up and join the lacing system over the instep to lend a great lockdown to the midfoot of the shoe. I found that I could get extra security by giving these eyelets a little extra tug. The fit of the upper is good – the dynamotion fit does a good job of creating a secure but comfortable heel wrap. The forefoot fit is a bit narrow and tapers to be somewhat pointy in the toe box, but the forgiving mesh allowed my wider foot to run in the Precision without much irritation. If you have a wider foot, however, be sure to try on the Precision before purchasing or seek out one of Mizuno’s models available in a wide width. 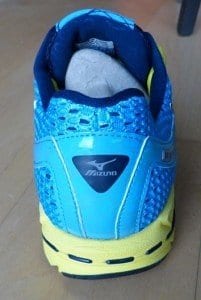 The Precision is built on a base with a 13mm “drop” (the difference between the height of your heel above the ground versus the height of the ball of your foot, also referred to as ‘ramp’) which, for a natural running shoe is a bit steep. For this reason, the Precision has great cushion for heel strikers. I expected it to feel quite clunky while midfoot striking but I did not think it impeded my mid or forefoot striking gaits. The cushion of the Precision is its key feature. I felt the Precision to be too soft and ramped for fast intervals or track training, but this is a personal preference. I did  appreciate the Precision on my long runs because it doesn’t feel too heavy or mushy in the early miles, and kept my legs and feet fresh at the end of 15-18 mile efforts. 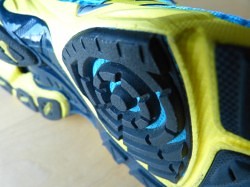 The outsole of the Precision boasts deep lugs for a road shoe which made it more than capable on dirt and gravel trails and roads. The soft midsole and lack of protection plate would keep this from being a capable technical trail runner, but I would recommend the Precision highly for non-technical multi-surface running. At 9.5oz for mens size 9, the Precision isn’t exactly a featherweight racer, but would make a great do-it-all training and race day shoe for budget-conscious neutral runners at a reasonable $110 MSRP. I would also say the Precision would be a great choice for heavier neutral runners looking for a shoe for faster training sessions and racing, or those looking for a well-cushioned marathon shoe. 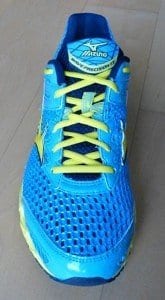