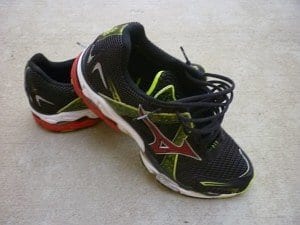 If you’ve never given wave technology a try, give it a go. You might just surprise yourself…

To begin with, I ran in barefoot shoes just about all summer. I was looking for shoes with less structure, less padding, less… well, everything. Really, even though it all started innocently enough (I was looking to correct my form in order to avoid multiple common “runners” injuries that seemed to be looming over my shoulder), it soon became a quest for the latest and greatest. And there’s quite a lot out there. So it was with some trepidation that I opened the box up on these and performed my pre-testing ritual. I slid them onto my feet after giving them a heft or two (my initial reaction – these are WAY too heavy for their own good), and slowly began to smile. Miles later, I’m still smiling; I guess you’ll just have to read on to find out why.

To begin with, there’s one thing you can say about the Mizuno line up – they always look cool. I don’t know if it’s the sweet logo, the slick colors they pick, or the overall model of their shoes, but they always prefer clean lines, neat blocks of color, and killer graphics. All of this combines to form a scheme that just looks, well, fast. And fast as hell. I’m not all that fast a runner, but I sure do feel fast with these on. At this time of year, and up against all of these other Usain Bolt wannabe color schemes (nothing against him, but he’s just a bit bright, even when he does false start and disqualify himself), you would think a shoe that’s predominantly dull black wouldn’t stand out. Somehow, it does. Kinda like how a panther stands out when it wants to kill you. 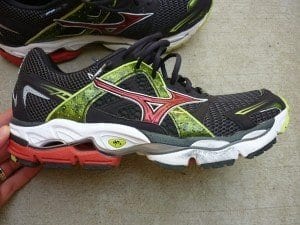 A panther doesn’t need flashy. It only needs stealth and lightning quickness. Tell me that doesn’t just LOOK quick.

Since I opened with the wave, let’s start with talking about how it performs. Mizuno lists the Enigma as having the “maximum” amount of protection and support that a neutral shoe can have in their line up. I know you might be thinking that these are mutually exclusive topics, but having run in a number of their shoes, I can tell you it’s all wrapped up together. First, you can actually see the wave (check it out above) as it runs the course of the shoe. The plastic literally forms a wave shape similar to that of an ocean wave as it runs throughout the entire shoe. Indeed, Mizuno had this going on long before the Zig Nanos hit, but the technology is basically the same. The wave shape is the most efficient (read: energy efficient) way of dissipating force. So by having it strategically positioned in your foot strike, you will require less energy to complete your normal running motion, as less of your energy is rebounding off of the concrete. I would think (wrongly, it turns out) that this shape would cause a fair amount of pain to run on – wouldn’t a rippled shank create an unlevel running platform? No so, in fact.

The key to the success of this (and every other shoe in the lineup) wave is the cushioning and structure built around it. While other companies have been striving for the less is more approach, Mizuno has stuck with the more is more approach. At 12.4 oz, they certainly aren’t the lightest shoe around. Since I only briefly alluded to it earlier, here it goes – they run fast. Really fast, as in not all like a heavy, neutral cushioned shoe. They certainly do feel structured though, and because I’ve also been testing this years Precision 12 (which feels like a noodle by comparison) I can tell you it’s one of the more structured shoes in the lineup. It’s been great to return to a neutral cushioned shoe which firmly holds its shape throughout the run. Some will not like the rigidity of the shoe, but I really appreciate some support towards the end of any run over 8 or so miles. 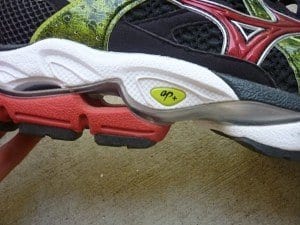 They mean “Wave” when they say “Wave”

I’m looking forward to training more in this shoe, not only because it’s been refreshing to return to a structured shoe, but also because they are built for the long haul. Some outsoles this year that I’ve tested were falling apart by the time I reached 150 miles in them (in an attempt to become super lightweight, no doubt), but these Mizunos are built in every way to go the long haul. The outsole is extremely durable and long lasting (by the time the above photos were taken I’d already put 50 miles on them), but doesn’t sacrifice grip at all – wet pavement wasn’t a problem. 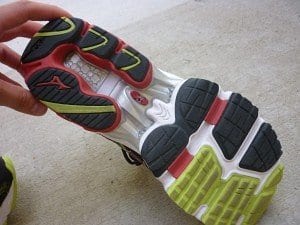 The bottom line – if you aren’t making the leap into the barefoot movement (or haven’t even heard of it), and still would like a consistent, neutral cushioned shoe with some structure for those longer runs, look no further. Not only will you be happy with the longevity of this particular model, you’ll get to be the dark horse in any race you partake in. Literally, because everyone else will be wearing various shades of fluorescent pink. For more info on the Wave Enigma and other Mizuno footwear, visit www.mizunousa.com.