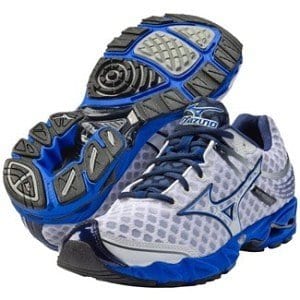 Some think that the term neutral describes a lack of pronation correction. Literally, an absence of technology which somehow makes the shoe less of a buy. Some companies are even guilty of using more tech laden shoes, pulling a correction last out of it, and putting it on the market as a neutral shoe. Mizuno, fortunately, takes a completely different approach. In a rare blend of comfort, free movement, and Japanese styling, Mizuno would like to introduce us all to running Nirvana through Wave Precision 12.

Admittedly, Mizuno’s neutral shoe lineup runs the gamut from the most constrictive to the most free. Check out our review on the Wave Enigma to see the Precision’s polar opposite. There isn’t a feeling from the Precision that it’s a stripped down version, however; one step into the Precision 12, and you’ll feel that it was crafted with, for lack of a better descriptor, sheer precision. It’s built from the ground up to allow for freedom of movement, from the outsole to the last, without sacrificing comfort or (perhaps most importantly) performance. I liked training in these shoes just as much as I liked racing in them – and I had ample opportunity, putting almost 150 miles on these shoe before sadly switching to the next demo pair. 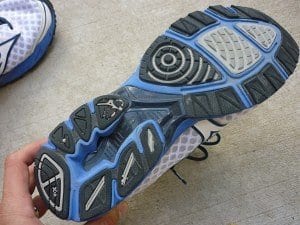 Not too hard, not too soft. Juuuuuuust Right.

The outsole really is a great piece of ingenuity, and tends to put other companies to shame. Typically, what I see in outsoles is as follows – the firmer it is, the more durable it is. The more flexible it is, the more it tends to fall apart after only a few hundred miles. This also goes hand in hand with traction – the softer the rubber, the grippier it tends to be. I wish I had a bar graph to stick in here, but you’ll just have to take my word for it – the Precision 12 goes in the opposite direction of all the typical shoes. It’s got great traction in all conditions without being too soft, and it’s got awesome durability without being too rigid. In short, Mizuno nearly achieves perfect bliss.

We’ve covered Mizuno’s wave technology ad nauseam on the site, so I won’t delve too deeply into it here. It does, however, tie in with the block printing on the side of shoe rather nicely, however. For those who aren’t up to date – the wave form is nature’s most effective way of dispersing force, so Mizuno uses a wave shaped shank in all of their shoes in order to disperse the force of impact with every foot strike. Like it’s brethren in this year’s lineup, the shank is exposed to the outside, seen running through the sole of the shoe from the side. What’s nice about the wave form on this shoe it that it lacks the stiffness found in other iterations without becoming useless. It still disperses energy effectively, and still has enough form to hold up to long runs. I really liked it at the end of long runs, because it provided the requisite support for tired muscles. 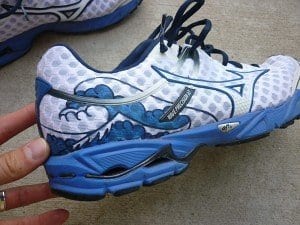 You can see the plastic shank running through the shoe – I love that wave print above it.

The upper is where this shoe really shines, in my opinion. I like the construction of the mesh upper. It’s very comfortable, breathable, and lightweight. Indeed, when the whole shoe weighs in at only 9.9 oz, you can’t waste a whole lot of weight on the upper and tongue. The honeycomb upper is quite a bit different from other shoes as well, in that it actually uses quite a bit less material. The edges of the honeycomb pattern are where the thicker material is – the center of each honeycomb has only the thinnest mesh in it. I’d imagine this is where Mizuno cut most of the weight. Really, the only complaint I have about the entire shoe is the styling on the upper. While I really, really like the wave print on it (I’ve never seen a running shoe company dabble in classic art), I question the patent leather toe bumper on the front.  It seems incongruous with the design of the shoe, and really throws the whole effect off. 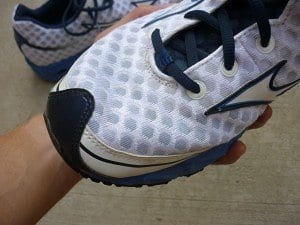 Fans of Mizuno won’t be disappointed with this shoe – it stays true to the classic Mizuno Wave form, and is lightweight enough to feel race worthy. New comers to Mizuno will love the introduction into the Mizuno feel, which is truly unique in the running industry. An added bonus is the price point – at just over $100, it’s a great choice for those who want a race day shoe and training shoe all wrapped up into one.

For more info on the Wave Precision 12 and other Mizuno footwear, visit www.mizunousa.com.