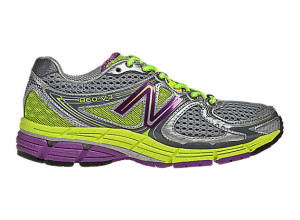 New Balance has several new offerings for the spring of 2013, ranging from their minimus series (promoting natural motion) to heavy pronation correction. The 860v3 falls much closer to heavy pronation correction on that spectrum, and packs in quite a few new and updated technologies as well. Many aspects of the shoe got an overhaul for this year – as a result, the 860v3 now feels as if it’s not only closer on the spectrum to pronation correction, it’s a full fledged stability shoe. Those that were a fan of the approach New Balance took in the 860v2 will most probably want to look elsewhere in the New Balance lineup for a shoe, as differences between the feel of them were quite drastic. 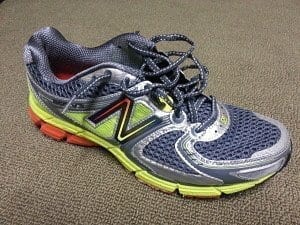 Great styling, comfort, and a loud color palette make the 860v3 stand out.

While I was a bit surprised at the turn the 860 had taken (New Balance now fully categorizes it as a Stability Shoe), I did find that for this shoe (which should absolutely be categorized as a stability shoe), it was nimble and quick rather than being bulky and unresponsive.

New Balance structured the feel of this shoe around the PL-1 last. I happen to be a big fan of this last, as it fits the shape of my foot rather well. A last is one of those things that either works for you or doesn’t; it’s not exactly going to break in over time. New Balance confirms on their website what I’d long thought – PL-1 is one of the most popular lasts in the New Balance system – it’s built for a slightly anatomical heel shape, lower than average instep height, slightly lower toe box height, and a reduction of “forefoot girth.” The short explanation for all this terminology is that the shoe has a pleasing foot shape, comfortably hugging the heel and forefoot during runs, yet giving the forefront of your toe box a little room to expand when striking the ground. When trying them on, give them a couple of run strides with both shoes on – you’ll know right away if they fit your feet, and the 860v3 was no exception to this – I knew right away that they were a good fit for me as soon as I had them out of the box. 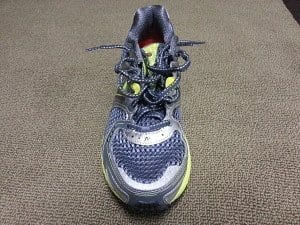 The PL-1 last: one of the most popular lasts in the line up.

The last is built upon a midsole which features not only heavy pronation correction (the medial post is color coded on the outside of the shoe for visibility, and – more likely – marketing purposes), but also ABZORB heel crash technology. This is really where the shoe feels completely different from last years model. True, ABZORB was in last year’s model, but this year it just feels a lot different. The run of the shoe felt extremely cushy while being firm on all surfaces. On soft surfaces, I almost lost a sense of the ground; I don’t really care for this sensation, as I prefer to have a sure footed feel of whatever surface I’m running on. I always feel that I will roll an ankle when a shoe is too plush, and I did get a bit of that with these. This was, however, only on the softest of surfaces; on concrete, they performed just fine. 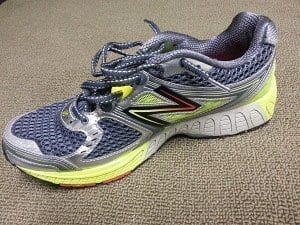 Note the coloring on the outsole to market the amount of pronation correction in the shoe.

The reason for such a drastic change in the feel of the shoe is that the 860v3 now targets a very specific subset of consumers – it is actually a Medicare approved A5500 diabetic shoe. I was actually shocked to find this out, as shoes in that category are usually marked by how chunky and unattractive they are. While certainly beefy looking (they aren’t actually beefy, New Balance managed to keep the weight down to a surprisingly low 11.6 oz.), they do not look or feel anything like an A5500. I now think that this is the coolest attribute to the shoe – New Balance managed to craft the shoe around this concept, but have it look the same as multiple shoes in their lineup.The version we tested was obviously fairly bright; if you’re not a big fan, however, the 860v3 comes in 5 different colors. Our version was the most “out there” in terms of color palette of the lineup, so don’t be distracted by the brightness – there are more subtle options out there. 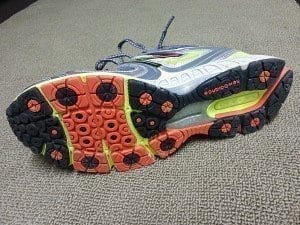 As always, a high quality outsole rounds out another quality product from New Balance.

Neutral footed runners and forefoot strikers will want to stay away from this shoe, as the toe drop comes in at 12mm, and the padding lends itself heavily towards a heel-toe running transition. When run with a forefoot strike, the feel of the shoe is a bit unbalanced. When run with a heel strike, though, the gait is smooth. Overall, Clydesdales and Athenas will really, really love this shoe for long distance workouts, especially where soreness has been an issue in the past. Head on over to www.newbalance.com – these are online exclusive, so you won’t find these in stores.