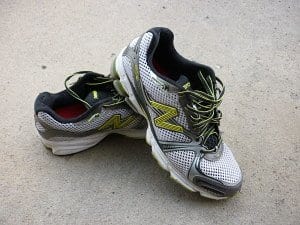 One would think that New Balance would run out of room to upgrade. Eventually, they would just hit a peak and be done with it. Especially on a no frills, entry level neutral cushioned shoe. It seems that an overhaul of the shoe was completely unnecessary for this year’s release. After all, the 759 (it’s direct predecessor, and reviewed by none other than yours truly) was a great all around training shoe. It was great for gym workouts, any distance run you wanted to take it on (and I mean any distance), and even the occasional track workout. Trails weren’t really the 759’s forte, but hey – it’s a road running shoe.

Thankfully the people at New Balance never stop innovating. The 880 was a pleasure to test out, and felt just as great right out of the box as it did on mile 50 (or so). The 759 felt a bit snug in the toe box right away – strangely enough, the 880 didn’t appear to have this issue. It felt very comfortable right away, kind of like slipping into an old friend. An old friend that really, really wants to run long distance, that is.

Having tested quite a few shoes in the New Balance line up, I felt fairly comfortable hitting up a 10 mile run right away in these. I wasn’t disappointed – there was no blistering, no rubbing, and not even a hint of a need to break them in. I’ve always loved this about New Balance, and have heard this same feedback from several runners. The comfort factor largely stems from the thicker tongue (secured in place with a gusseted lace strap) and the sock-liner. It’s really a home run on both fronts, but I enjoy this specific type of snug, mid-foot wrapping fit. New Balance has always stated that the “N” logo adds to this fit – I don’t really think so. It’s pretty much just for looks, but I like the design anyway. 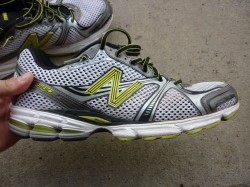 This is after quite a few miles – it just refuses to break down.

The upper is not really an upgrade from the prior model, but does show the same moisture wicking mesh as the 759. I was actually glad that they chose not to upgrade this, as it was one of my favorite attributes on the 759. It continues to keep your feet cool and dry on all but the steamiest runs. On a recent run inTexas, I had a few swampy issues with foot sweat, but in one hundred percent humidity, I’m not sure that any shoe wouldn’t. The nice thing about the mesh is that it’s backed by a very soft interior which holds it’s shape nicely throughout the life of the shoe. The pictures below were taken after several miles of rough road running inEcuador(pavement was considered a permanent fixture, without the need for any sort of maintenance), and the shoe held it’s shape nicely. 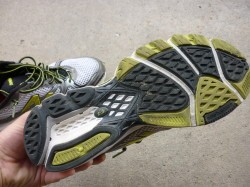 I love the rubber outsole, but can’t get past the stabilicore…

Last but not least, the outsole made of blown rubber provides great traction, and holds grip in most conditions. Slick metals (of the type found in very rickety pre-90’s bridges – don’t ask) give it a bit of a challenge, but once again, this is due more to the running surface than the shoe. The only problem I have (and had with the 759 as well) is the slightly less than graceful feel of the plastic stabilicore insert. It tends to prevent as smooth a roll through as would be possible on this shoe; other models such as the 890 (and the up and coming 1400 – more on that later) have a very smooth roll through from heel to toe. The stabilicore insert also tends to wear through the blown rubber after a few hundred miles – this isn’t a huge deal, but tends to detract from an otherwise well designed shoe.

The bottom line is that the 880 remains a great choice for all runners, entry-level or otherwise. Just because the shoe doesn’t pack a ton of flashy tech doesn’t mean that it doesn’t perform day in and day out. I found myself reaching for them on days when my workout hadn’t yet been decided – whether it was gym, road, or track, I knew I’d grabbed a solid choice. Try them out, you won’t be disappointed.