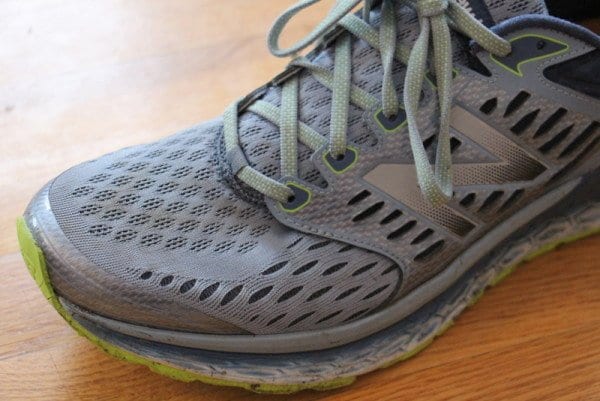 The fit of the upper on the New Balance Fresh Foam 1080 V6 is a little off out of the box and on the first hundred yards.  Typically this goes away after a few runs in a shoe, but I’ve found after 100+ miles for this to be the same every time I put on the shoes. This obviously isn’t great when you’re trying the shoes on at the store or when you get them home for the first time.

The good news is the odd fit feeling goes away after a couple minutes of running in the Fresh Foam 1080 V6’s.  Out on your runs, these running shoes feel great.  The cushioning around the heel keeps your foot nice and secure, the lacing keeps your foot in place with no hot spots to speak of, and the mesh allows your foot to breathe while keeping debris out.

The tongue in the 1080 V6 is attached to the entire upper which gives the upper a bootie style construction which is a nice feature because the tongue of the shoe doesn’t slide to the left or right while running.  Along the toe of the shoe, there is a thin layer of rubber that helps for durability and keeps out water in case you toe through a puddle of water. 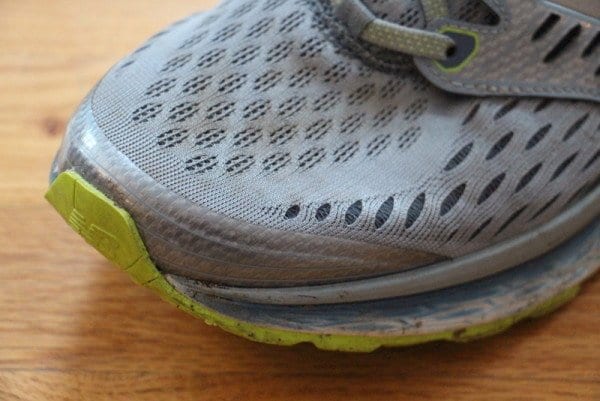 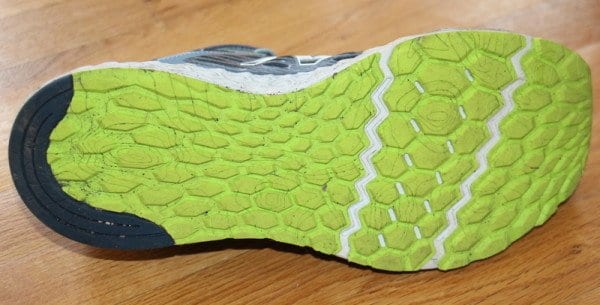 The outsole of the New Balance Fresh Foam 1080 V6 flexes with the motion of your foot, but is durable and will last the standard 400-500 miles for most runners.  One of the downfalls with most flexible outsoles with grooves is that they often get rocks stuck in the little cracks, but up to this point, I haven’t had one rock stuck in the outsole.  This to me is impressive because after testing these shoes in during the winter in Steamboat Springs, CO, there is plenty of gravel on the roads for traction.

The midsole of the New Balance Fresh Foam 1080 V6 is made with New Balance Fresh Foam which is responsive and provides plenty of cushion during long runs.  I’ve grown accustomed to cushioned running shoes and I think the extra $10 or $20 spent is worth the money.  Cushioned running shoes like the Fresh Foam 1080, Brooks Glycerin, Asics Nimbus, and others are generally near the top or at the top of the price point for most brands. As you know, we all have different incomes, foot types, and shoe preferences.  After testing hundreds of running shoes for 9 years and running for 25 years, this is my opinion, take it for what it’s worth.

For the die hard New Balance 1080’s, I think you will be happy with the V6.  This shoe has stayed pretty consistent over the years and the V6 doesn’t go too far from the past models.  The design of the New Balance 1080 V6 has a much better style compared to previous models in my opinion.

When comparing the 1080 V6 against other cushioned neutral running shoes, I think they compete well in the class, but I recommend heading to your local running store when possible.