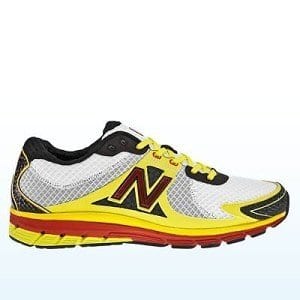 RevLite – if you haven’t tried it, get yourself some.

New Balance came through in a big way this year, and not just in a single shoe. Numerous shoes on the lineup got a complete overhaul, and the 905 is one of them. Now deemed the 1190, the 905 got more than just your standard facelift – it was torn down from the shanks up to create an entirely new feel. The 905 was a run of the mill trainer – it felt nice, but didn’t really shine when compared to similar products across the industry. This is definitely not the case with the 1190 as it’s built for speed without sacrificing performance, and thanks to RevLite it’s pretty lightweight, too. Weighing in at just 9.0 oz, it’s the lightweight trainer and racer all rolled up into one that you’ve been begging New Balance to create. 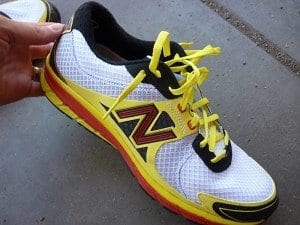 RevLite is the game changer for New Balance this year.

The feel of the shoe right out of the box has RevLite written all over it. If you haven’t tried a RevLite shoe this year, head on over to your local running store and give any RevLite pair a spin. It’s definitely worth writing home about. We first saw it in the 890, and it definitely drew our attention in a good way. For those of you who don’t know, RevLite is a midsole compound. It’s basically the foam that is put in the majority of midsoles to make the shoe, well, runnable. What makes RevLite so outstanding is not the hyped up fact that it’s 30% lighter than all industry leading compounds currently available. Yes I’ll admit that this is really, really cool. But anyone can make a midsole that’s 30% lighter… and performs terribly. New Balance made RevLite to perform better than the leading competition – in terms of rebound, cushion, and balance. New Balance, if you will.

What’s nice about the 1190 is that with RevLite technology in the midsole, it bridges the gap between a traditional cushioned shoe (think the whole gamut here – neutral cushioned, stability cushioned, you name it) and a true barefoot shoe. The big difference (and what makes it so hard to transition from shoe to shoe) comes in the heel drop. Traditional shoes can have over 12mm difference. Barefoot shoes (by and large) have less than 3mm. The RevLite system in this shoe still allows for a heel drop, but balances the shoe differently so that the heel drop isn’t as severe. Indeed, if you’ve been running in a traditional shoe but never felt quite right, the 1190 is a breath of fresh air. After running in structured shoes, it suddenly feels like you can breathe again. 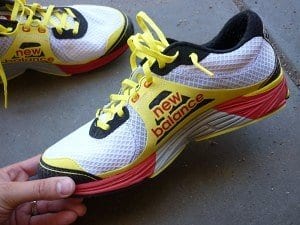 So enough about RevLite, how does the rest of the shoe feel? I really like the construction of the upper. The blend of mesh and solid paneling is effective at keeping your feet cool and dry, and it’s comfortable as well. I didn’t have any problem with it even on long distance runs. I also really like the construction of the tongue and lacing configuration. Some companies try to get really technical and tricky here, but New Balance listened to the feedback of actual runners and did what they said – kept it simple. The tongue is comfortable without too much cushion, and lacing/eyelet pattern is effective at holding tight for the long haul. I always lace the entire shoe up through the last eyelet, so heel slip is never a problem for me. Speaking of the heel, another nice feature of the upper is the lowered heel cuff. It’s cut to be slightly less intrusive on your ankle, and even features a nice soft ring of fabric.

A few other nice features round out the shoe as well. The outsole is durable, fairly flexible, and doesn’t seem to wear out fast. Not to be overshadowed by RevLite, New Balance also includes their patented N-ergy system in the outsole, which provides for even more shock absorption and cushioning. All together, this forms a very attractive package in a shoe that only has one real drawback. I’ve been questioning this all year, and can’t wait to see what New Balance does in terms of this next year. RevLite shoes tend to break down quick – the life of each shoe I’ve tested tends to be in the 300-350 mile range. Other leading shoes easily get half again as much. 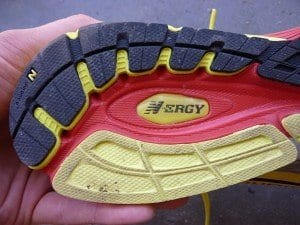 N-Ergy is a nice addition to round out the shoe.

The bottom line is that even though it breaks down a bit fast, running in RevLite feels like nothing else. And with all of the color choices, you might not mind picking up another pair just that much more quickly. Check out the RevLite tech at www.newbalance.com.