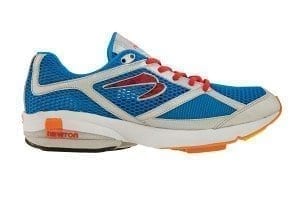 For those not familiar with Newton Running shoes, the core idea is that running on the forefoot and midfoot helps to prevent injury and can be a means to faster running. While this idea is not terribly unique these days, Newton’s concept that forefoot running can be accentuated definitely is. Newton makes running shoes with minimal heel protection and rubber lugs that protrude from the outsole under the ball of the foot. When the runner lands on their forefoot, the lugs depress into recessions in the midsole, then spring back on toeoff, propelling the runner forward. Newton calls this Action-Reaction Technology. The fact that Newtons are different is debatable until you put them on- standing and even walking in these feels very strange at first. One of our testers remarked that the raised-forefoot posture felt like wearing sprint or long jump track spikes. Running, however, feels amazing in Newtons.

The Gravitas is a new neutral-runner model from Newton with a revised, slipper-like upper, and slightly more heel cushion than other models for longer training runs and races. The upper of the Newton uses stretchy mesh and minimal reinforcements and the result is a forgiving, plush fit. Most of our testers actually disagreed with Newton that their shoes run a half size small- the fit is so good and stretchy that you can almost go down half a size without risk of black toenails and blisters. Those that like a more secure ‘clampdown’ in the upper of their shoes might be disappointed in their ability to achieve that with the Gravitas.

Newton recommends a slow adjustment period when transitioning to Newtons for the first time because the shoes will stress the calf muscles and other stabilizing muscles in the lower legs. We found this to be necessary- one tester rushed into a 10-miler the second time out in the Gravitas, and had significant soreness in the lower legs. To speak to performance, running slowly in the Gravitas is just difficult. Forefoot running in these shoes produces a profound propulsion feeling from the lugs, and the forward-leaning posture recommended by Newton reinforces faster turnover as well. One tester threw down PRs for a few distances on training runs in the Gravitas and commented that he couldn’t wait to race in them. Overall, we think that efficient neutral runners, especially those looking to rip will love the racing-shoe fit and slingshot-like technology behind the Gravitas. For more info, visit newtonrunning.com.