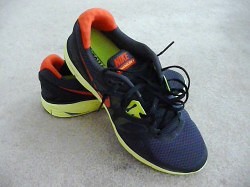 Some cushioned shoes err on the side of softness – it’s as if they replaced the original pronation correction with mysterious material, somewhat like the consistency of cotton candy. Other cushioned shoes err on the side of stiffness – they may lack that marshmallow feel, but there’s hardly any flex to the shoe. It’s no surprise that with all of their resources, Nike was able to construct a cushioned shoe that lands perfectly in the middle, somewhat like the three bears; they aren’t too hard, aren’t too soft, they’re just right.

Nike has long been a staple of the running community, from racing flats to gym shoes. Lately, however, the Nike free campaign sought to craft and create a line of shoes that would compete in the burgeoning barefoot market. While they weren’t entirely successful, the genesis of the situation created a number of enhancements which are found on the Lunarglide 3, and are pretty awesome in terms of a cushioned shoe.

To begin with, part of the Nike free movement was to create a upper that was less restrictive to your foot’s natural movement, but more constrictive overall. Read that again, because it seems to be at odds at first – in fact, it doesn’t make sense until you put the shoe on. Most shoes have strips of material, or one solid block of material solely for the forefoot, and yet another block around the heel cuff, all connected by varying layers of mesh-like fabric. Nike took it a step further by making the entire upper feel almost like a really tight sock, stretching the material to snug down over your entire foot. At first it feels inhibitive, but after a few steps, it feels pretty awesome – the shoe hugs every curve of your foot without a single pressure point. 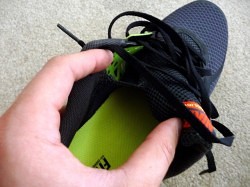 The upper from the top down – note the secure tongue and forefoot reinforcements.

All of the above was just the STARTING point for the LunarGlide 3. Nike built upon the initial upper construction, and then added a few bells and whistles in order to improve upon the fit listed above. The result is no less comfortable than it’s predecessor, and even a bit more secure on your foot. It starts in the heel with a reinforced heel cup; the fabric at the top is soft, and grips the back of your tendon to avoid heel slippage. Perhaps the most interesting addition is a solid plastic band wrapping out and down from the top of the heel cup to the sole. The function of this is to correct pronation. I don’t actually feel that it did that a ton, which was nice. Pronation doesn’t need to be fought in most runners, just guided slightly.  While I had no complaints about heel slippage before, perhaps the majority of people did. I found it to be snug without pinching, and rather liked the upgrade. Bear in mind, though, that I prefer a high fitting heel cup. 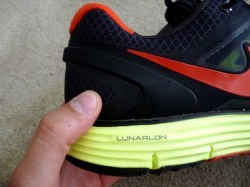 The next addition is in the lacing itself and forefoot itself. This might be my only complaint about the entire shoe. I’m from a school of “if it ain’t broke, don’t fix it” so I’m not sure why Nike decided to reinforce the forefoot with an inner band of stretchy material. Typically we would see this on either a heavier shoe or on an extremely lightweight shoe; in both of these, it functions to keep the shoe on the foot when nothing else will. Here it seems a bit excessive, although no less comfortable.

The midsole showcases Nike’s latest development in fit and comfort. Dubbed “Fitsole” by the running gurus over there in Oregon, it seeks to provide an anti-odor comfortable liner to the shoe, without sacrificing weight or durability. Through the many miles we’ve put on this shoe, it hasn’t really broken down all that much. I believe it’ll go for the long haul.

Perhaps the best feature overall of this shoe is the outsole. A major issue with the Nike free system was that the sole was designed to “flex” with the movement of your foot, providing a “free” ride that mimicked the natural motion of the muscles in the bottom of your foot. That’s all fine and good, but the way they went about it severely limited the use of the shoe. It was only good for hard, consistent surfaces because it would pick up every rock, stick, or piece of trash you ran over.  Nike went with a more traditional outsole on the Lunarglide 3. It’s a solid piece of high density rubber (dubbed Lunarlon) that rolls smoothly from back to front. No plastic, no shiny pieces, just smooth rubber for the duration of the piece, with portions marked off for texture. It’s supremely well balanced for a fore foot strike, and provides great traction and durability for the long haul. I had just as much fun doing speedwork in these as I did running long distance. 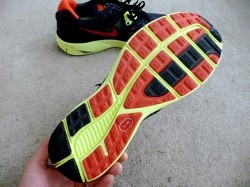 The outsole – solid from heel to toe. A nice feature for multiple surface running.

The bottom line is that you really can’t beat the LunarGlide 3 for an all around trainer. With a slight bit of pronation correction, it’s a great fit for runners looking to move away from bulky stability shoes. Whether it’s a treadmill, sidewalk, or track, I found myself reaching for the LunarGlide 3 over numerous other pairs of shoes. As an added bonus, they don’t look all that bad either.

For more info on the Lunarglide +3 and other Nike footwear, visit www.nike.com. 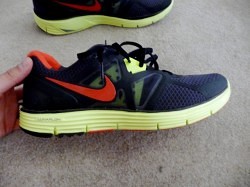 All around, it’s pretty easy on the eyes.