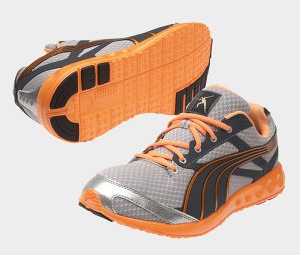 Puma’s Faas line of running shoes have made an impact on the running shoe industry for their style and have surprised some with solid performance, especially for those buying into minimal and natural running shoes. The Faas 400 is a new lightweight performance trainer with a great fitting, socklike upper and a flexible, lightweight midsole that come together in a great shoe for fast shorter runs and longer tempo and long runs for neutral runner accustomed to running in more minimal shoes. 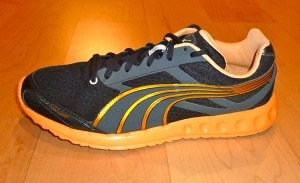 The upper doesn’t have a lot of tech, it just fits and breathes well, and has a nice wider forefoot to allow for toe splay.

BioRide Technology, according to Puma, is a unique combination of factors in the midsole responsible for the responsive ride Faas line of shoes, but our testers commented that the Faas 400 had a minimal midsole and was lacking a bit in forefoot cushion. One tester who has been wearing low-drop running shoes commented that this shoe could benefit from more cushion in the forefoot and a resulting lower drop. The midsole material of the Faas is molded to form the outsole with higher-wear EverTrack rubber inserts on the outsole only under the large toe and heel areas for durability. The overall effect of the 400 midsole makes this shoe highly flexible – testers commented that the Faas 400 is a good alternative to the Nike Free line for those tired of extracting rocks from the flex grooves in their shoes. 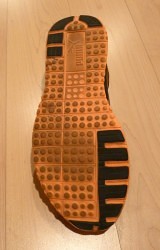 We tested the Puma Bolt Faas 400 on short interval days, recovery runs, and even longer efforts up to 10 miles, and felt that at 8.0 ounces (Mens 9), they are an excellent light-feeling fast shoe for all neutral runners as an interval and tempo shoe, or as a daily trainer for lighter-weight runners and those accustomed to more minimal shoes.

Inspired by the World’s Fastest Man, the Faas 400 Bolt is constructed with BioRide Technology and typical PUMA flair. It falls around the mid-point of the Faas Cushioning Scale, making it a perfect lightweight trainer.

The design of the Faas 400 Bolt is inspired by PUMA’s old school running shoe, the Easy Rider and hails the future of the sport, Usain Bolt. It features an air mesh upper with bonded nubuck overlays, plus some added bling-bling with anodized paint on the midsole. The EverRide and EverTrack in the outsole add cushioning and durability where it’s needed, while the OrthoLite sock liner increases breathability. Finishing, flashy touches include a pearlized toe cap and heel


For more information, head to Puma.com.