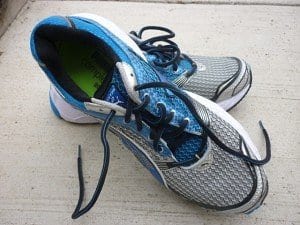 Clydesdales. Really, it’s an unfair term, since the heavy footed feminine side of the species gets to be called “Athena.” Really, we should coin a new phrase – but since popular nomenclature terms the heavy-footed large runner as such, I will acquiesce as well. So, clydesdales – look no further for a long distance shoe, you’ve got it here. I can’t imagine anyone less 6’0 200 lbs  running in this shoe, but if you are looking for the maximum amount of cushion without having to deal with finicky stability, you’ve found your match. I’ve never encountered another shoe with this much cushion. I’m 5’11” and 165 lbs, and the amount of cushion here made me feel like I was running on marshmallows.

So while it may be too much shoe for me, it has a lot of great attributes. Puma has come a long way in terms of shoe design, and this shoe shows a lot of thought and consideration for runners. The upper is snug without being too confining, and the mesh design helps keep your foot cool on even the hottest runs. I especially like the fit of the tongue – it had padding which broke in nicely to my foot on the first run, and stayed in place for as long as I wanted it.

Part of the reason it’s so comfortable is the new Ortho-lite insert; Puma completely revamped it for this year’s ventis, and seekers of the “Green” side of life will rejoice – it’s made from earth friendly materials. Essentially, Puma found a non-fossil based material that provided just as much cushion, comfort, and durability as those traditional materials. They claim it’s better for the environment, which I don’t know how to test. The claim I could test? That it’s less smelly due to an anti-microbial coating. I think they’re right on. 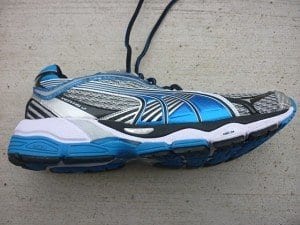 It’s not built for a forefoot strike, so running in it that way made it feel awkward and slow. But for heel strikers, the maximum amount of cushioning presents a very comfortable, balanced roll and stable toe off. The reason the shoe feels so balanced is due to Puma’s new system in which the midfoot is made of extremely low density foam, while the heel is made from a higher density material. When combined with an extremely durable, springy outsole material, this makes for the smooth transition points which larger runners seek. Overall, it’s still too much shoe for lightweight, efficient runners… but for a Clydesdale? Pure Bliss.

For more info on the Complete Ventis 2 and other Puma footwear, visit www.puma.com.