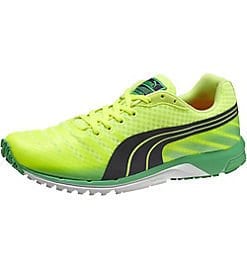 The Puma Faas 300 v3 is a neutral, lightweight, but technical shoe which is great for anyone looking to try out a minimal training or racing shoe.  I’ve been trending towards a lighter and more minimal shoe, so I was excited to give these Puma’s a spin to see if they would become a regular in the shoe rotation.  With that lightweight in mind, I fully intended to use them for some serious speed and tempo workouts. First and foremost, I usually break my shoes in by simply wearing them around for a day, and then hitting the roads for a few easy runs just to get a feel for fit. The initial impression was very positive as they fit quite comfortably for my slightly wider foot profile during those easier runs.  As advertised, the Puma Faas 300 v3 are probably one of the lighter shoes I’ve ever run in, and they  felt very supple and flexible from the get-go.  I tested the shoes in our local parks on paved paths, crushed gravel, as well as several treadmill runs. 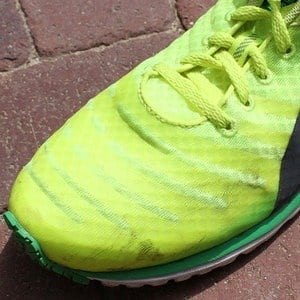 Some of the key features of the Puma Faas 300 v3 are a cushioned sockliner and air mesh upper. The sockliner is what really impressed me as there are limited seam lines on the interior to cause any rubbing or potential hot spots. After a few runs, they molded nicely to my foot creating a snug fit. The air mesh upper provides airflow and breathability from about the point where the laces start back towards the heel cup. The very front of the toe box does have a coating that prevents minor water penetration. I’ve scuffed them slightly over time, but for the most part that washed right off with some soap and water. 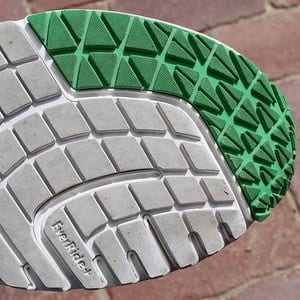 The FaasFoam in the midsole provides for improved resilience and a little bit of cushioning. The forefoot flex groove is super flexible as it hits any running surface allowing for a glove-like fit with every stride. If you are coming from a more traditional shoe, the heel toe drop is probably 12mm.  The Puma Faas 300 v3 is at 8mm which is only slightly less, so it should aid in the transition quite nicely.  I personally would have liked to see this shoe with a slightly lower Heel Toe Drop at 4mm, but I understand that with the 8mm drop the shoe may have wider running audience appeal especially ones new to a more minimal shoe.  Puma has placed a cushioning guide in bar graph form for this shoe right on the tongue. The Faas 300 v3 is at on the lower end of cushioning at a three, and that serves its purpose quite well. 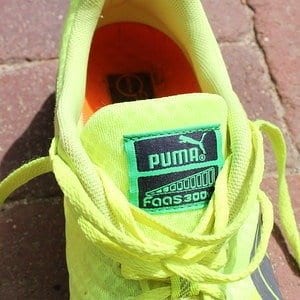 Hands down the most important feature/attribute of the Puma Faas 300 v3 is the lightweight!  7.4 oz. for a size 9. They performed beautifully as I was able to land efficiently on my forefoot, hitting the target pace for my workouts, all the while feeling really fast fast doing it.

There are 7 different color options, and I believe I tested the boldest of them all, the fluro yellow-island green-ombre blue. It took me a little while to get used to at first, but the “hey, look at me” factor has started to grow on me.  Ive always liked the simple classic design that Puma creates, and they have not dissapointed me in that regard.  Right on the heel on the insole there is a stamp with technical information, but that’s already starting to rub off. Hence, I question putting it on there at all, since the tongue already showcases the FaasFoam cushioning scale.

The mileage on one of my workouts went past 6 miles, and I did start to feel the bottom of my feet start to feel slightly irritated. Depending on your running form or style, you may be able to use this shoe for longer distances, but for me it will be purely a race trainer as marketed and advertised. And finally, the Puma Faas 300 v3 is great for the gym, all around trainer, or even a casual shoe to showcase the classic puma look.