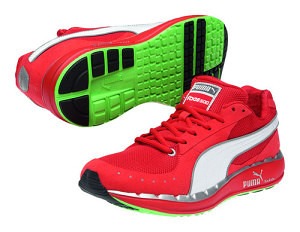 Over the years, I have tested out a number of Puma running shoes and I must admit, I have never been a huge fan.  It seemed as if they spent a little too much time focusing on soccer cleats and fashion, but not enough time on their running shoes.  So when I received the new Faas 500’s, I thought to myself; here’s another flashy shoe that won’t make the cut.  I opened up the shoe box and tried on the Faas 500 running shoes and my first thought was that they were pretty comfortable and looked pretty fun, a good casual running shoe to wear around town.  I then took the shoes out for a 5 mile run and I was pleasantly surprised.  I actually enjoyed running in a pair of Puma’s!

The Puma Faas 500 running shoes were put together with 3 categories in mind; rocker, flex, and groove, all of which make up the BioRide Technology midsole.  The rocker helps propel the foot in a forward motion from heel to toe, the flex allows your foot to do a little more work with each individual foot strike, and the small grooves allow the shoe to contour the ground and better react to every foot strike. I found the midsole of the Faas 500 to have plenty of cushion on middle to long distance runs, allowing my feet to do a little more work than normal, but not too much. Although they worked great for me on mid to long distance runs, I am not too sure they would work all that great for a runner with heavy pronation problems.

One of the noticeable difference in the Puma Faas 500 versus a traditional running shoe is the heel cup.  The heel cup of the shoe has no hard plastic to give the back of the shoe a lot of structure.  I didn’t find this to be a problem while running, but it had me asking the designers at Puma what the deal was. The rest of the shoe lacks plastic or synthetic reinforcement that most running shoes have.  This is a small concern to me as I don’t think they will hold up for an extended period of time.  I do however think they will hold up for the average mileage one can get out of a running shoe, between 350-500 miles.  They might just not hold up for years of lawn mowing after.  Overall, I was very happy with how the Puma Faas 500 performed and I commend Puma for stepping over to the bright side!  If you are looking for a more lightweight minimalist shoe, Puma is also going to be offering the Faas 300 this season which is a trimmed down version of the 500.

For more info on the Faas 500 and other Puma footwear, visit www.puma.com.