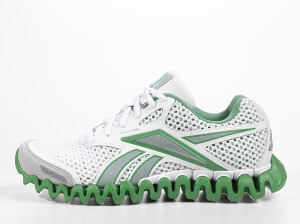 While many running shoe companies are following the trend in that less is more, Reebok has decided to take a different approach.  As you will notice in the Spring and Fall 2011 running shoes, many companies are starting to reduce the amount of cushion and material that is put into a shoe.  The reason for shaving weight is because a large amount of runners and consumers are either interested in or buying into the ideal of minimalism.  The general concept is that if a shoe offers less support, your foot and body will run in a more natural state.

On the opposite end of the spectrum, Reebok has introduced the Premier Zigfly that absorbs some of the foot strike impact and allows your muscles to use less energy while running.  This can to come in useful in longer runs.  Now I don’t think either way is better or worse at this point; they are just different approaches and I respect that.  I must admit the Reebok Zig technology does look a little unconventional, but that might just be the older school running mentality in me.

My first run in the Reebok Premier Zigflys was a 15 mile long run.  Now there is a long standing myth that you should break in a pair of shoes before putting in a long run, but I am not a believer of that thought process.  Years ago, I decided to run a marathon in a new pair of running shoes and it turned out fine.  Since that moment, I have not let new shoes define the type of run I do while putting in my first few runs in a pair of shoes. .

The fit of the Reebok Premier Zigfly is plush, snug, and cushiony.  Around the heel cup there is plenty of soft padding to keep your foot secure and comfortable.  The inside of the shoe is almost seemless with the use of what Reebok calls Fitsmooth, similar to seem sealing tape.  The outside of the upper is made up or an airy mesh that is well ventilated, so whether you are running in cooler early spring temperatures or hot summer temperatures, your feet should stay ventilated.  Much of the outsole of the Premier Zigfly is a more slick blown rubber, but  to give you traction, Reebok has added a sticky durable carbon rubber to give you traction on almost any surface.

In the end, I have to admit I was a little skeptical with the unconventional look by the Reebok Zig Technology, but I have been very happy with the performance of the shoe.  The Reebok Premier Zigfly will be available in stores February 1st, 2011 and will retail for $99. For more information visit reebok.com