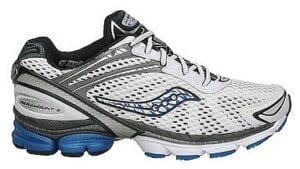 The ProGrid Paramount 2 is a feature-packed shoe that doesn’t disappoint. At $170 MSRP, we went into this review expecting great things from this new iteration of Saucony’s top of the line stability trainer, and found a lot to like. The Paramount 2 features a new temperature-regulation system in the upper called Comfortemp, which, according to Saucony, releases a cooling substance when the foot temperature reaches 82 degrees and when temperatures drop, releases stored heat to warm the foot. Our testers took the Paramount 2 out on some scorching summer days, but weren’t sure whether or not they could feel the effects of this technology, but do think it is a promising idea. See a video of the Comfortemp technology here:

The Paramount 2 also sports an arch-lock system on the medial side of the upper which really gives this shoe a secure fit. The upper has a great form fit to it without feeling restrictive or irritating – we really give Saucony high marks for this. The Paramount 2’s midsole features a TPU-based Flexion Plate™ technology built into the midsole which gives the shoe a very responsive, fast ride. One of our testers did say that the lack of an upturn in the outsole on the heel of the shoe gave the Paramount 2 a bit of a foot ‘slap’ when landing on the heel, so perhaps the Paramount 2 will be most pleasing to mid- to forefoot strikers.

Overall, our testers concluded that the Saucony ProGrid Paramount is one of the best well-cushioned stability trainers on the market today, and that its feature set and mild-stability focus make it one to consider for all runners. It also sports great looks that had us reaching for these much more often than most of our running kicks! For more information on the ProGrid Paramount 2 and other Saucony footwear, please visit www.saucony.com.