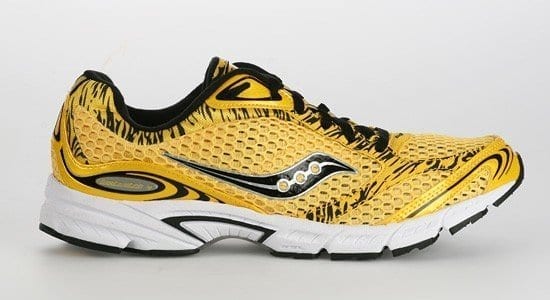 The Saucony Grid Fastwitch is the brand’s workhorse go-fast shoe, and the fourth incarnation goes faster than ever before. Saucony stuck with a working base and upper combination for the Fastwitch 4, but trimmed some fat in the upper to save a few ounces. This shoe has a medial post for mild over-pronators, but the midsole of is made with weight savings, not a Cadillac ride in mind. The forefoot has perforations in the midsole which aid in water drainage and ventilation to make this a great triathlon race day shoe. The upper mesh is very open for great breathability and ultra light weight. The biggest change from the past version is in the cosmetic department- the new bright yellow colorway (Mens’) with black tribal graphics is not shy at all. The Fastwitch 4 has shed a couple ounces since its last incarnation, weighing in at a scant 7.0 ounces, which puts it solidly in the featherweight racer category. Our testers sported the Fastwitch for tempo runs, interval workouts as well as a few races, and were impressed with how light and fast it felt. “I think I could hear the shoes taunting me to go faster,” commented one impressed tester. Based on how much our tested liked the this racer, we think the Saucony Fastwitch 4 will be a popular sight at 10Ks this season. For more information, visit www.saucony.com.