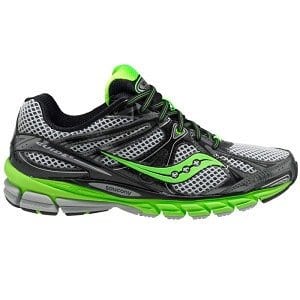 Saucony has long been known as a runner centric company with a passion for excellence; they actively seek out and listen to runner feedback, and have offerings for every type/style of running out there. It’s not surprising that the Guide 6 and Guide 6 GTX are not only excellent offerings, but excellent upgrades over last year’s edition. I should say upfront that the reason for the dual testing is that the Guide 6 and Guide 6 GTX differ in only one category – more on the later in the review. 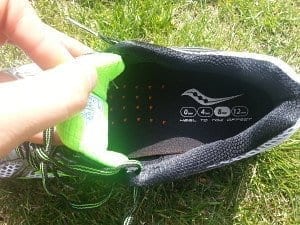 To begin with, Saucony understands that heel-toe drop is an independent issue from both pronation correction and cushioning. While other shoe companies are manufacturing the same shoes year after year with the same clunky feeling heel toe drop (some as severe as 13 or 14 mm), Saucony has taken the opportunity to really listen to feedback concerning toe drop. This is why the Guide 6, a flagship shoe for them, has 8 mm of toe drop, when other shoes in this category from other companies are sitting at 12-14mm. 4mm may not sound like a lot, but it makes an incredible difference in the performance of the shoe, especially if one is attempting to make the transition to a more biomechanically sound running stride. 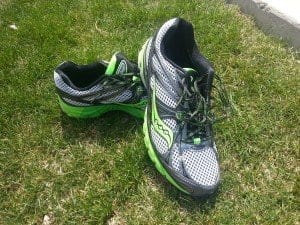 The guide 6 – packed with tech, and not too hard on the eyes, either.

The shoe is quite literally packed with new/improved technology offerings, and we’ll discuss how admirably they perform in the course of the review. First, though, I’ll discuss the testing parameters. My first run in them was actually on vacation – due to my prior experience testing Saucony, I was confident enough in the shoe to take them on an 8 mile run through the streets of Albuquerque, New Mexico right out of the box. We actually ran back to back to back days in Albuquerque, all at distances of over 6 miles. Over the next few weeks, I put several miles on both the Guide 6 and the Guide 6 GTX; the GTX was tested solely outdoors, in both slushy and wet conditions, while the Guide 6 was tested mostly (after the initial 20 miles) on indoor tracks and treadmills due to the freak snow storms we’ve been having here in Colorado. 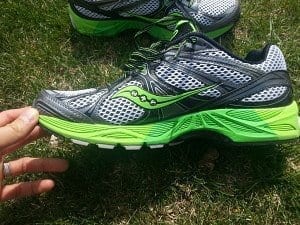 The upper – cool and comfortable on long distance runs.

Let’s start with the upper, and work our way down through the shoe. Three key components make up the composition of the upper on both the Guide 6 and the GTX. These three components are key to the extremely comfortable ride offered by the shoe. To begin with, the actual collar of the shoe has moisture wicking capabilities, which decrease irritation from hotspots due to rubbing below the ankles. The heel cup portion of the collar fits in the medium high range, but is plush and forgiving. It felt secure from the moment I put the shoe on out of the box. The collar extends down into a “comfortlite” sockliner, which is paired with the third key component, an HRC+ Strobel Board. I had to do a bit of research for that one, as I’ve never heard the term before, but essentially it’s just the shoe material immediately above the midsole, or the liner. What saucony does different, however, is put a 3mm layer of high density foam here for comfort – this extends equally from the heel to the toe, whereas in other companies, you may see this only in the heel cup. I felt that the upper was extremely comfortable on both shoes, and fits very well for both long distance and dynamic tempo runs. The upper on the Guide 6 kept me cool and dry – the GTX kept me warm during cold temperatures, as this is the only difference between the two shoes. The GTX has GORE-TEX in the upper. GORE-TEX was chosen because as a company, they have pioneered waterproof, lightweight and breathable materials for outdoor use. The Guide 6 GTX is no exception – the addition of GORE-TEX added only .8 oz per shoe. This is not a high price to pay for dry feet during a soggy afternoon run, and definitely was much appreciated. I actually compared and contrasted them during the same run; I could not feel the difference in weight between the two shoes. 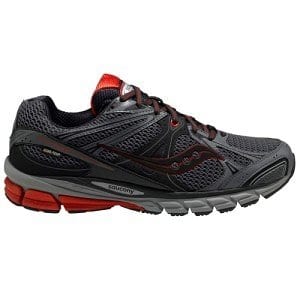 The GORETEX version – note the only visual difference is color.

The midsole is key to the balanced feel of the shoe. Apparently, Saucony relies heavily on a system of threes, as this has three key components as well. It begins with Saucony’s “Pro-Grid” technology. I can’t emphasize enough here that the feel of a Saucony midsole is distinctly different when run on a forefoot strike than other company offerings. The Pro-Grid extends the cushioning through the full length of the shoe – this means that you don’t have the heavy, clunk down feeling that you get when the heel cup cushioning is separate from the forefoot cushioning. The most heavily used design in shoes is one in which the heel cushion is separate from the toe cushion; this is also shown on the outsole, as a company will have some sort of plastic “bars” on the underside of the shoe with no continuation of rubber between them. The issue here is that this is not how your foot functions; this design inhibits bio-mechanically efficient movement. When the full length Pro-Grid is matched with both EVA and other compounds, it creates a system which effectively promotes efficient movement. 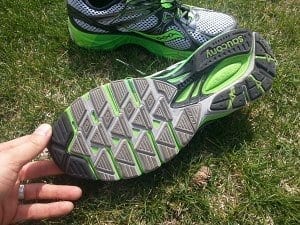 The outsole – the same for both the 6 and the 6 GTX. Provides excellent transition, a smooth ride, and a sure footed grip in all but the slickest conditions.

If not for the correct matching of outsole to this shoe, the system of biomechanically efficient movement would fail. Luckily, in yet another three prong approach, Saucony chose an outsole which compliments and enhances both the midsole and upper. What I found interesting, though, was that the outsole of both the Guide 6 and Guide 6 GTX are identical. The outsoles on both were reliable in a variety of conditions. The technologies at play here to keep that traction so reliable IBR+,  XT-900, and the specific shape of the lug. IBR+ is a very interesting compound – it’s 33% lighter than standard blown rubber (which is why the Guide 6 tends to be a few oz lighter than the competition), and provides more impact resistance. As I only have a few weeks in either set of these shoes, I’m interested to see if IBR+ has as much longevity as it’s blow rubber counterpart. Judging by the feel of it (it feels more solid to the touch than standard blown rubber) I’d say it will last the long haul. I don’t see any signs of breaking down at the time of this review. Saucony claims that the introduction of XT-900 into this rubber makes for longevity, only time will tell on this one.

In summation, the Saucony Guide 6 and Guide 6 GTX provide a great choice for runners needing a small bit of pronation correction, but don’t wish to have the poor transition properties of a larger heel toe drop. This is also a great gateway shoe for those looking to begin the transition into a running style that favors a forefoot strike, as Saucony makes a progression of heel-toe drops in order to aid in that transition. At $110, the Guide 6 may be the best value in this category this spring, but it will largely depend on the shape of a runner’s foot, as the Saucony last does tend to run on the narrow side. If you run in an environment which frequently has excessive moisture, an additional $10 ($120 in total) will get you the GTX, which I highly recommend for colder climates as well. The Guide 6 comes in a wide variety of colors, but the GTX only comes in black. For more info on the Guide 6 and other Saucony footwear, visit www.saucony.com.