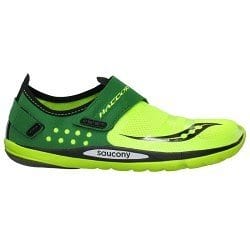 We’ve all seen, heard of, or tried barefoot running by now. It’s been all the rage for a few years now, and shoe manufacturers are getting hip to the fact that it might just be here to stay. Built on a tradition of running “naturally,” barefoot enthusiasts have literally chucked their own shoes out the window and started running, well, barefoot. This approach isn’t for everyone – some of us (myself included) had to ease into it, approaching a new running form by gradually shedding layers of correction, cushion and protection until the foot hit the pavement.

Fair warning to all of those considering the Hattori – this isn’t an “ease into barefoot running” sort of shoe. There is a difference between a “minimalist” shoe and a “barefoot” shoe – if you are even considering giving it a spin, you should have been doing muscle-strengthening workouts for quite some time now. There are a number of features to the Hattori which make it even more aggressive a barefoot shoe than that old standby – Vibram Five Fingers – and create a unique running experience all of their own. But I’ll start from the beginning.

Right out of the box, the Hattori didn’t look like anything I’d ever run in – and I’ve run in a fair amount of shoes! At an excruciatingly low weight (4.5 oz), it felt as if I was holding a pair of slippers (I honestly think smart wool socks weigh more than these). While other barefoot shoes have a rigid structure created by heavy-duty rubber outsoles, these have literally no structure at all – they flex, bend and twist whichever way you want them to. 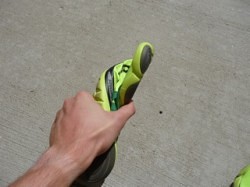 Twisted completely in half! Try that with a stability shoe…

The upper is made from a truly sock like material; it actually brought to mind water socks in the way it fits. This is actually the best way to describe the feel of putting it on your foot for the first time – it felt just like putting on a neoprene glove, except without the individual toes. The upper is banded by a Velcro strap on the heel and ankle which secure the cuff of the shoe, and the forefoot by two see through plastic straps that run across the top of your foot just behind the toe box. While it looks flimsy at best, it hugs your foot surprisingly well, and doesn’t slip in the slightest. 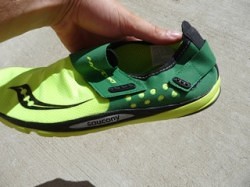 Velcro on the strips provides a surprisingly snug fit.

The outsole is perhaps the most surprising portion of the shoe – it either shows an oversight on Saucony’s part, or a new finding in barefoot mechanics. I tend to believe the former over the latter as this is the first iteration of the shoe, but most will make up their own mind. The surprising portion does not come in the outsole material, which is extremely soft and supple, but in the placement of the reinforcement pads (dubbed cushioning pads by Saucony).  A pad in the heel only makes sense if one is to do a fair amount of walking in the shoe, as a heel strike is disastrous in a barefoot shoe. The second pad is placed on the inside of the arch of the foot – this is odd because in a forefoot strike, most of the impact occurs on the outside of the arch – after all, it’s one of the stronger portions of the foot. These two areas are slightly confusing in how contrary they are to the overall design of the shoe.  The next two pads make sense, as they are placed in the ball of the foot and the big toe, supporting roll off to the next stride. I’d have liked to see opposite placement on the center pad, and less in the heel. Perhaps in the next version. 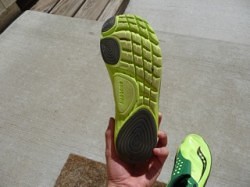 Heel, ball of the foot, and big toe pads in green, medial pad in yellow.

The feel of the shoe when actually moving, however, may just be the most unique experience I’ve had in running. The midsole of the shoe has a cushiony feel to it; while it’s thin, it’s definitely there. There really isn’t a better way to describe it – it feels like a wafer thin slice of marshmallow. This may throw off some people who would choose this shoe over a five finger, but don’t let it – it’s really not an impediment at all. The lightweight construction doesn’t lend any structure to the shoe (see the photo above for proof!), and gives the feeling of really running barefoot. I tried these shoes over a variety of terrain, in a few conditions – I like them best on an indoor track, without socks. This was really surprising to me, as I blister easily; I didn’t receive a single blister from the feather like touch of the Hattori. Pavement was okay in them, but not supremely enjoyable as I don’t have a lot of confidence that the soft outsole would protect my foot from glass and other detritus on the road. Indeed, after about 10 miles of pavement running (not all at once, run in 2-3 mile excursions) the soft outsole began to wear.

I applaud Saucony’s first foray into barefoot running. It shows a ton of R&D, and listening to feedback from barefoot runners. It does a number of things fairly well, but also has some room to grow. I’d actually even recommend picking up a pair – the $80 price tag is great, and if you don’t mind turning a few heads (they do look outrageous), it’s a great addition to your training at the gym – plus, you can now run barefoot on the treadmill without grossing everyone out. Saucony has them featured on the first page of their site right now (July 2011), so cruise on over and check them out.