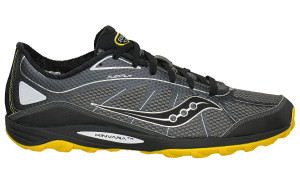 The trail racing scene has been growing with leaps and bounds in the past years, and it seems that just about every company out there is producing not only trail shoes, but trail shoes specific to racing. Built with the fleet footed racer in mind, the Saucony Kinvara TR is Saucony’s contribution to the trail racing scene for this spring/summer.

You would think Saucony would follow the pattern that numerous other companies out there have – take a popular offering (the Kinvara is huge on the minimalist scene), and just slap some trail attributes on it. Boom, trail shoe. Saucony wasn’t just satisfied with the status quo – since yours truly has run in both, I can tell you it’s obvious that the Saucony Kinvara TR was designed to match trail needs from the bottom up. 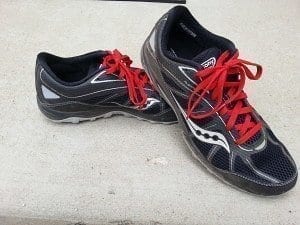 Love the styling on the Saucony Kinvara TR

My first impressions of the shoe were highly favorable. I’ve always been a big fan of the Saucony design aesthetic, and the Saucony Kinvara TR is definitely a winner here. Right out of the box, the design appears low slung, fast, and race inspired. You may not be fast, but just pulling the Kinvara TR out of the wrapping you’ll feel it. They are surprisingly light weight right out of the box as well – the website lists them at a scant 7.9oz per shoe, putting them way ahead of other products on the market. Turning them over, the lugs on the bottom appeared to have a shape which would hold up well on the trail, with smaller micro lugs placed throughout for traction. Rather than equip the shoe with heavy duty toe protection, the Saucony Kinvara TR comes with a toe bumper which appears to be nothing more than heavy duty fabric. 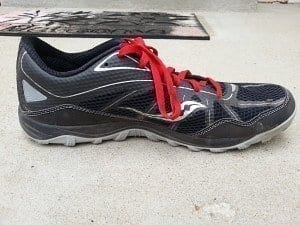 I was fairly eager to test them out, as the summer came in quickly here in CO – all of the local trails are bone dry and favorable for trail running. My testing phase lasted over a period of three weeks, in which I was able to get just a bit over 20 trail miles in on them across two five mile trail runs and one 95 minute trail run on which my GPS died;  As mentioned above, my conditions were always bone dry, but I did manage to get them wet in a couple of small streams. The trails consisted of slick rock, scree, extremely hard packed dirt, loose trail, and gravel. Colorado is famous for its rugged trails, and I took the Saucony Kinvara TR through some decently rocky sections.

To begin with, I really, really liked the feel of the tongue and the upper. The upper was extremely breathable and comfortable which is great for hot summer trail runs. The shoe wasn’t built to be waterproof, so my brief sojourns up the creek bed completely soaked my foot. I expected this, though, and was satisfied with how quickly the Saucony Kinvara TR dried out. The gusseted tongue is comfortable (even over long distances) and I especially enjoyed the heel cup. Saucony put two heel bars in the Kinvara TR, and they really kept your heel locked in without sacrificing comfort to do so. 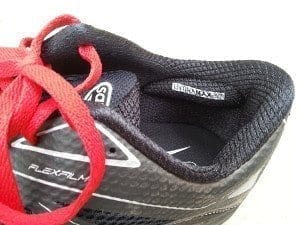 These heel bars are super comfortable.

The midsole and outsole, however, seemed to miss the mark just a bit for a trail shoe. The Kinvara TR is built upon the idea of a minimalist shoe, and those seeking this ideal will no doubt very much enjoy it as it fulfills that definition and then some in the minimalist style. Where it falls short, though, is in foot protection and traction. Being true to the minimalist ideal, the Saucony Kinvara TR does not afford much padding to speak of, and the heel to toe drop ration is a mere 4mm. Even though there is no padding, though, there should still be a modicum of forefoot protection, especially for jagged rocks and technical descents that trail races are becoming famous for. While the Kinvara TR does offer Saucony’s EBO (external bedrock outsole) tech, I found that even the lightest stride still resulted in tender feet after my runs. 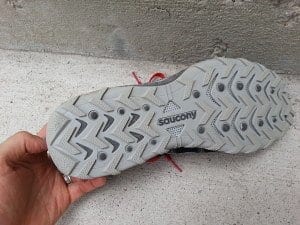 The traction leaves a little something to be desired.

As for the outsole, the shoe is definitely suited towards trail runs in arid climes. For Colorado, this style of outsole makes sense; it’s grippy without slowing you down, rolls well down the trail, and affords adequate traction on most surfaces you will encounter during a run or race. My water fording excursion, however, revealed that once you get the outsole wet, it lacks in traction. While the upper dried quickly and effectively, the outsole was immediately slick, especially with the coating of dust on it from the trail. While I could find no mud on my trail outings, I do believe that muddy conditions and the Saucony Kinvara TR just simply will not mix.

In conclusion, the Saucony Kinvara TR is a good choice for fleet footed trail racers seeking a minimalist shoe. Those new to the sport of trail running will not appreciate the lack of forefoot/toe protection and lack of traction on wet surfaces. The shoe is definitely well suited to fast and experienced trail runners who don’t have to deal with water too often. The styling of the shoe is excellent, and the comfort level also makes them a great casual shoe for every day wear. For more info on the Kinvara TR and other Saucony porducts, visit www.saucony.com.

Interested in a females thoughts of this shoe, check out the Saucony Kinvara TR review by our rock star tester Stephanie!