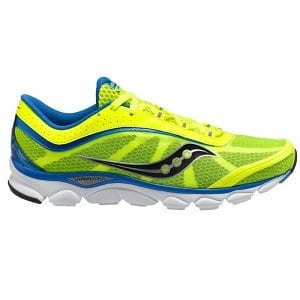 Several running companies have made a commitment to listening to runner feedback. Of late, the feedback from runners concerning natural running movement and techniques has grown increasingly fervent. Each company has their own take on this feedback, and is attempting to manufacturer products that meet this growing demand. Saucony, claiming to have made great strides in their R&D, seeks not only to meet this demand but rise above it. The Virrata is one out of a myriad of choices which attempt to demonstrate this. The question – did Saucony put it’s money where it’s mouth is? Read on to find out. 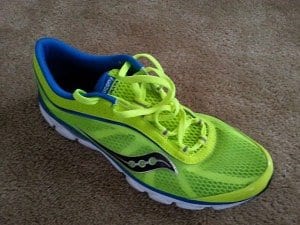 Check out that neon yellow. It’s even harder on the eyes up close.

In order to understand the why and how behind the Virrata, we first have to explore Saucony’s intent. This year, Saucony launched a new product line and dubbed it the “Natural Motion Series.” Predictably, this series aims at designing a shoe which not only does not fight the natural body mechanics of running, but attempts to enhance it. Saucony took this to mean “fewer layers, more flexible materials, and less structure” than what had previously occupied their time. The catch phrase they have to surround this endeavor is “Stripped down to Strong,” which has a nice ring to it. In short, getting rid of the non-essentials allows for more freedom of movement, and presto, we have a new shoe line up.

We’ll start with the overall weight of the shoe, which I noticed immediately when taking them out of the box. Saucony is no stranger to light weight shoe construction.  The Virrata weighs in at just 6.5 oz, making it one of the lightest shoes in the line up. My initial impression was a shoe that was this light could not provide any cushion for a long distance run. This is my typical complaint of so-called “natural” running shoes – sure, they feel good in the short term, but longer distances become a pain, quite literally. I immediately slipped them on and walked around the house. My first impression was that I not only liked the construction of the mesh upper and the plush inner liner (designed to feel like a sock – it does, as I made my first voyage around the house sans socks to test), but also the cushioning of the shoe throughout the foot. I began to contemplate whether or not my first impression was accurate – perhaps Saucony had addressed the issues listed above, and created a new hybrid of shoe which includes the best of both worlds. In order to find out, I headed to the gym, as there was approximately a foot of snow on the ground at the time. 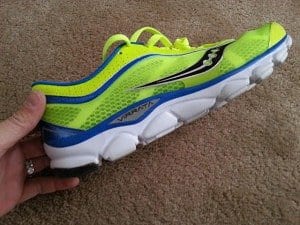 Check out the platform – cushioned equal across the shoe to compliment a forefoot strike.

My testing in these shoes consisted of several miles across a couple of different surfaces. As the weather did not cooperate throughout much of my testing phase, I logged as many treadmill/indoor track miles as outdoor miles, of distances up to six miles at a time. As I detest treadmill and indoor running, this represents a slight paradigm shift – normally most of my miles are spent on pavement. There is a distinctly different feel to these shoes when moving from treadmill to indoor track, and again from these surfaces to pavement, as there should be. But what I liked about the Virrata is that the shoe actually felt more comfortable on firmer surfaces. The cushioning actually felt a bit much when running on a plush surface, and seemed truly at home with firm terrain under foot. I believe that distance runners will really appreciate the feel of this shoe, especially when reaching longer distances. 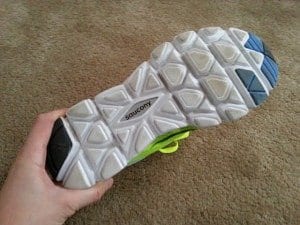 What I like best about the Virrata does not have anything to do with how plush the shoe runs; it has everything to do with how the cushioning is distributed. The Virrata has Omm of drop from heel to toe, meaning the shoe has a perfectly level platform. Other companies stubbornly cling to the idea that there should be more cushion in the heel than toe, forcing the runner into a heel striking motion. Some companies believe that a 0mm heel to drop means that there should not be any cushion in the shoe, only a thin strip of rubber separating the runner from the pavement. The Virrata is a perfect compromise of ideals – the platform is level, and cushioned equally from heel to toe. This means that forefoot strikers will find their impact distributed equally from heel to toe, and cushioning that aids in this motion as opposed to feeling clunky or slow. This also has much to do with the flexibility of the shoe itself. As the interactive image on their website can attest, the Virrata is extremely flexible due to the materials used in building the shoe. The only real question I have is whether or not this extreme flexibility will lead to decreased durability down the road. As the testing phase is too brief to get over two hundred miles in, I don’t know at this point. Saucony claims increased longevity, as at $90 a pair, I believe it is definitely worth the gamble. 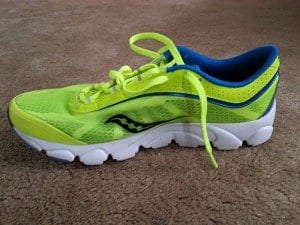 The high heel cup was comfortable with and without socks. Nice touch, Saucony.

The end result is that I do feel that Saucony put it’s money where it’s mouth is, and delivered an excellent shoe aimed at complementing a natural running motion. Unlike some competitors, Saucony recognized the need for protection against hard surfaces and provided the runner with a pleasing blend of cushioning and flexibility. I would not, however, recommend this shoe for anyone with a heavy strike, be it forefoot or heel, or for those who tend to utilize a heel strike only when running. But for those who have developed or are attempting to develop a more balanced running style, the Virrata is a perfect fit – quite literally, in fact, as I found it ran very true to size. As the photos reveal, we tested them in a nearly neon yellow which almost hurt my eyes to look at them. Frankly, as I’m not the fastest runner in the gym the yellow felt a bit flashy; when you order you can choose from the three alternate colors available if this is a problem for you as well. Head on over to www.saucony.com to check them out in all of their color variations. Spend some time on the natural motion website – they have a few fun gimmicks to teach you about their running philosophy, and kill a few minutes at work waiting for your next run.