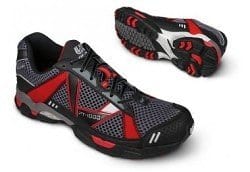 We here at AGR will go to extremes to test gear. We do it so that you will know with absolute certainty that when the going gets tough, your gear gets going. Over the years, we’ve thrown all that we had at all manner of gear. It’s with some chagrin now that I have to admit I didn’t take this piece of gear to the limit. I have a confession to make. I put a fair amount of miles on these shoes, but I have no intention of running 1,000 miles in them.

UK gear makes the claim that the PT-1000 will do just that, and they claim to be the first company to design a shoe that will do so. If you are hoping for a myth busting type of review, you won’t find it here. But I can say this with absolute certainty. If any shoe was designed to go 1000 miles, it’s this one. Simply put – it’s beefy enough to go the distance, and then some. You have to be to live up to the rigorous requirements of the Army Physical Training Corps – the elite crew of fitness minded individuals who are the best of the best in the British Army. 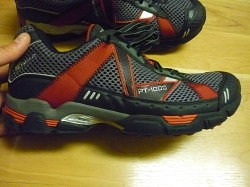 Beefy is as beefy does…

Everything about the shoe is solid, from top to bottom. What you see is literally what you get – appearances aren’t deceiving here. The upper is constructed of not one, but two layers. The first layer is breathable mesh; it’s backed by a neoprene like second material to give it a rigid shape and stiffness. This stiffness serves to encircle the instep and forefoot, locking it down during runs on all manner of surfaces – whether it was road or trail, it wasn’t going anywhere.  The tongue isn’t separated from the upper, but cut out of the same mesh lined material. Because of this, it’s anchored tightly, and doesn’t tend to slip on even the longest runs.

Following the trend of just about every shoe company out there, UK uses an EVA sockliner for the interior of the shoe. This is backed by a “dureva” midsole – we don’t know what it’s comprised of, but it’s very stiff and unyielding. The EVA works predictably, keeping odors out of the interior of the shoe. Granted, I didn’t run without socks in them (that would have been unwise), but for the conditions I ran in (hot, muggy Texas heat) they were adequate at keeping away smell. The midsole is partially the key to the longevity of the shoe – after several runs, they were only just beginning to feel as if I had made a dent in breaking them in.

The second half of the longevity equation lies in the outsole of the shoe. As you can see in the photos, the outsole hardly looks run in; indeed, I’d be able to return these shoes to any running store with confidence that the clerk wouldn’t even notice the difference. In reality, however, I’d put over 50 miles on these at the time of the photo. Simply put again – it doesn’t break down. The hardness of the rubber, however, did compromise the traction of the shoe. While very rugged, it wasn’t nearly as grippy as I would have liked on slick surfaces. In places where I would normally find purchase, I found myself washing out – especially when descending technical switchbacks and slick rock. 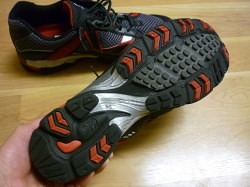 Torsionally, these are about as stiff as you would expect – they simply just don’t have any torsional flex to them at all. This stiffness serves to support and provide resistance against heavy footstrikes, no matter what the gate style. This is great for heavier runners who are looking for a stable platform. This stiffness is in large part what makes up the so called “structured cushioning” of the shoe. It does not correct pronation; it is simply so stiff that pronation can’t occur. 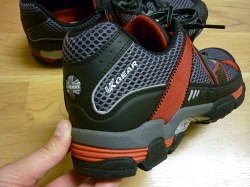 With numerous other nice features such as a reinforced toe bumper (this is great for protecting the toes on trails), flat lacing ( for keeping you laced up without double knotting) and a high heel cup (for preventing heel lift), the PT-1000 is packed with tech. So even though we weren’t able to put the full compliment of miles on them, Clydesdales should still rejoice – you won’t go through six pairs of these bad boys in one year. Read about why they’re bad ass enough to carry the British coat of arms on them at UKgear.com.