The second iteration of the Asics Gel-Lyte 33 saw quite a few changes from the original while still being considered a lightweight neutral trainer. While the Gel-Lyte 33 is lightweight and features a low heel-toe drop, Asics stays away from calling it minimalist running shoe but boats its similarity to a racing flat. I question the similarity to a racing flat, but it is definitely not as built up as a traditional shoe with less material, lighter weight (about 8oz for women’s 7) and a relatively low drop (6-7mm best I could tell), but that information isn’t published by Asics. 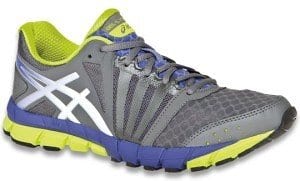 The Gel-Lyte 33 uppers are mesh on mesh with with synthetic materials in specific areas like the heel, toe, and wrapping around the midfoot to help support and durability. The uppers are soft, flexible, and have some cushioning but are not overdone. The uppers breathe really well keeping feet cool and dry. There is definitely more to the uppers than in most minimalist-style shoes and I would think the shoe could be even lighter if Asics cut down on the amount of material used in the uppers. The fit isn’t as snug as some minimalist shoes tend to be, but a slightly roomier toebox coupled with the flexible mesh outer didn’t constrain my foot at all. 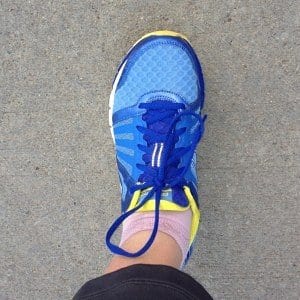 The insole is nothing to boast about, but does provide a bit of arch support. The interior is smooth with flatlock seams for those that may want to go sockless. I generally never run without socks, but due to forgetfulness ended up running in these without socks and they felt fine – no chafing, no blisters, no hotspots. The tongue is lightly cushioned and wraps around all the way around the foot and attaches under the insole giving the shoe a sock-like fit.

The new FluidAxis is said to be anatomically correct grooves that keep joints inline and adjust to the runner’s gait. The new F.A.S.T.™ technology includes low drop, lightened outsole, and lighter heel construction. I found that the low outsole really helped keep the shoe flexible and the grooves weren’t hugely noticeable, but I did feel that the sole of the shoe allowed my foot to move throughout my stride without resisting my natural gait. The heel features Acics long-standing trademark of Gel technology which added a firm cushioning that felt like it would go the distance and not break down quickly. 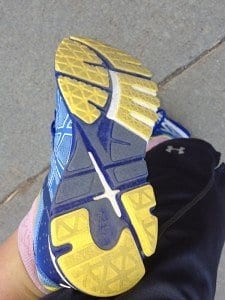 I have worn these for short to mid-distances runs and have covered 60 or so miles in them. For me, they seem to be a great shoe for easy-paced runs especially mid to longer distance runs when a little extra cushioning but not a lot of bulk is welcomed.

For those with a neutral stride looking to maintain natural running form while still offering our body a bit of cushioning the Gel-Lyte 33 2 should not be overlooked. For the weight, I think these would be a great choice even for medium mileage and don’t think they would break down as quickly as other shoes in the category do.

The Gel-Lyte 33 2 come in three color options each for women and men.

For more info on the Gel-Lyte 33 2 and other Asics footwear, visit www.asics.com.