Hoka One One Challenger ATR Review 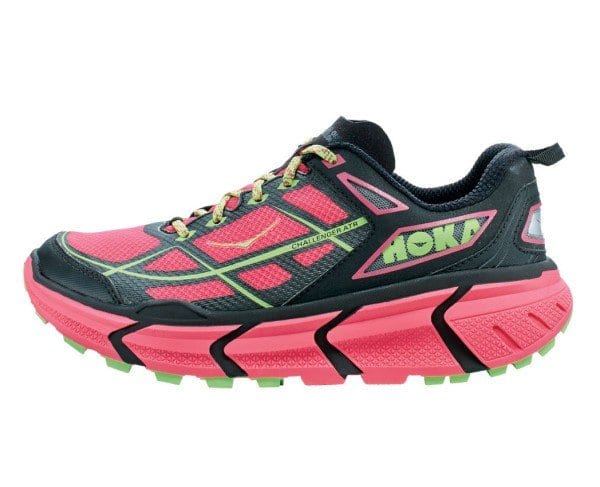 Hoka One One Challenger ATR

If you are a runner, you’ve seen them out there. I suppose the first time for me was more of a comical, surprising, what the heck was that? It was 2010 or 2011, and I got passed by a guy wearing them in a trail race in Colorado’s Rocky Mountains. They’ve been called moonboots, pillow shoes, and clown shoes? The point here is that you are now seeing them out and about on the trails, roads, and at your local races. The popularity of these shoes is sky rocketing. This Spring Hoka is introducing 5 new brands including the Challenger ATR. Testing the Hoka One One Challenger ATR will be a new experience, but I am looking forward to the opportunity

Born and bred by 2 French guys well known and established in the running industry. They both used to work for Salomon, and have an impressive running and shoe industry resume. I always thought Hoka’s full name was pronounced as the English version ‘One One’. Turns out, it digs back to its French roots as “O-nay, O-nay”. I’m sure that doesn’t really matter, but an interesting little tidbit. They wanted to create something that could handle the rough and rugged terrain of the Alps, Pyrenees, and Dolomites. The thinking was that Big and Wide like Pow Skis, Fat Bikes, and oversized Tennis Rackets could be translated to running. This would give a larger sweet spot, a more stable platform, and a rockered profile to aid in a better running form with less impact to provide a smooth ride. 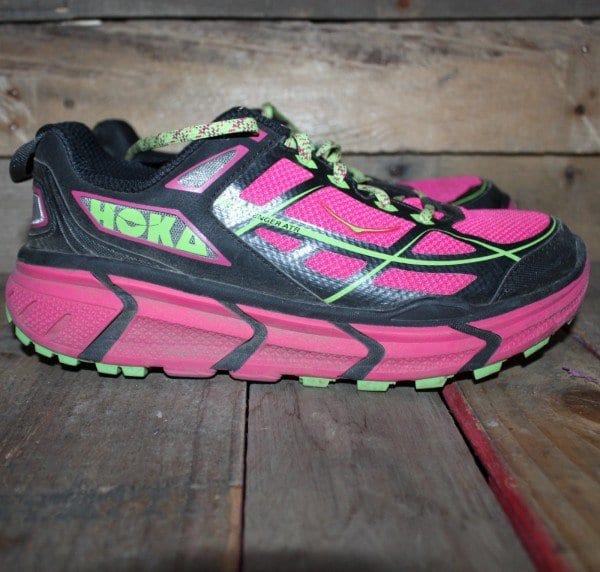 I’d say it does have the signature Hoka look, but with some streamlined finesse thrown in.

You know, I really don’t think these Hoka shoes are all that aggressive with the thickness of the sole, and definitely less than what I expected. Yes, the sole is much thicker.  They do, however, have a somewhat sleeker look and portray that lighter floating on air feel that will hopefully propel me up the steeper inclines and cushion the technical downhills.

Upper of the Hoka One One Challenger ATR

These days, it is all about no-sew uppers to eliminate any possibility of upper foot rubbing or agitation which could lead to hotspots. The Hoka One One Challenger ATR is also part of that innovative evolution with its No Sew SpeedFrame Upper Construction.  No issues whatsoever up until this point, and I’ve put plenty of miles to test that technology. 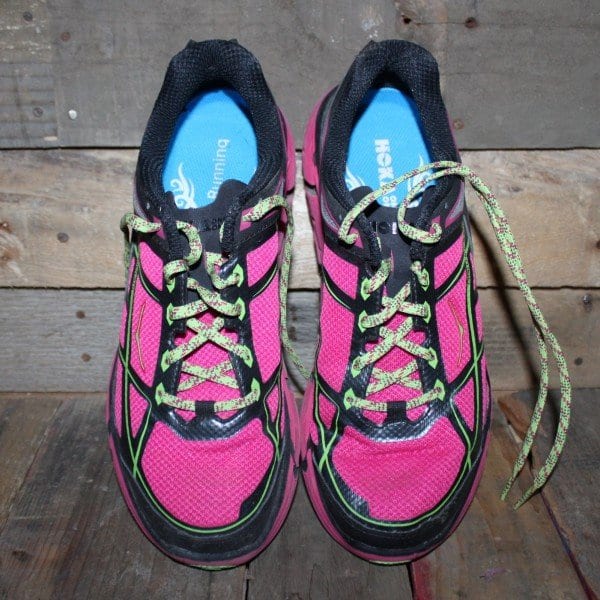 The Hoka One One Challenger ATR has these independent rubber pods that give that extra little bit of stability out on the trails. The Front Range of Colorado has a rather abrupt change in scenery and elevation which provides for a wide array of trails to be enjoyed. Many trails do not provide for a nice and gentle warm up. Instead, you are faced with an aggressive and technical uphill. The perfect proving ground for these independent pods. The rocky and loose gravely terrain kind of gets absorbed or swallowed into the soles as the pods disperse with the small inconsistencies. 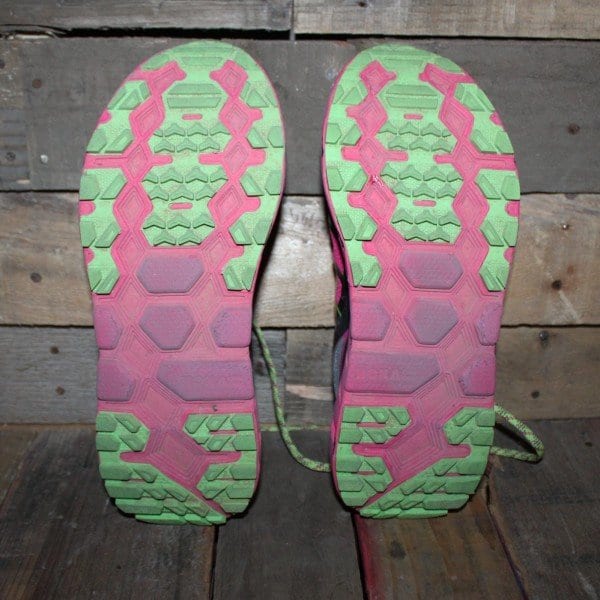 Hoka’s Meta-Rocker midsole geometry is designed to encourage a runners positive gait speed roll as one transitions from the heel strike to the toe-off. The sculpted outsole radius creates a unique fulcrum effect and encourages a guided foot gait cycle. Once I got into a good running rhythm after a few warm-up miles, I didn’t really notice this technology as I was moving simply and efficiently. And that, I suppose, is the Rockin’ point. 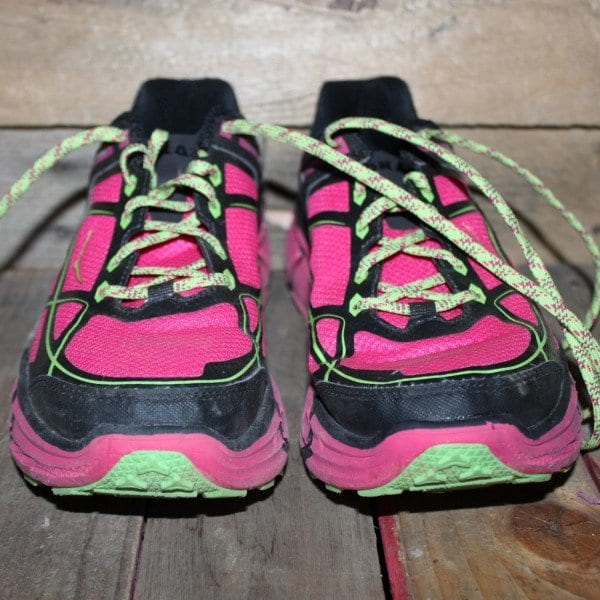 Toe bumpers to add some life to the front. Also note how the midsole becomes part of that frontal protection.

Performance of the Hoka One One Challenger ATR

I am a creature of habit, and haven’t ventured very far from my tried and true shoes; the Saucony Pro Grid. As a young child, I had one leg that was slightly longer than the other. To this day, I have a slight swinging motion in my stride, so I’ve always been told by my LRS that the support shoes are what I need. It has worked well I suppose as I have 15 marathons (including 4 Boston’s and an Ironman under my belt, or shoes, or feet….well, you get the picture). The last few years after a couple kids, I have been dealing with IT and knee issues. Nothing to keep me from running, but enough to give me some pain, and prevent me from going full force. I kid you not. I am now able to go the distance, and have been for the past 6-7 weeks while testng these. 100+ miles on these shoes, and I have to decide in the near future if these will be my go-to shoes for my marathon.  Most runners are pretty determined types, and I don’t sway very much from my routine. Hence, this is a big deal.

My usual 4 mile loop is how I got started with these. Nothing crazy, just around the neighborhood and park. I’ve done it a thousand times, and it allowed me to get used to the idea of this maximum cushioning. Yes, it is a little much at first, but then you forget about, and you go about simply running. The cushioning and rocker motion allows for a landing zone or impact that obviously takes the brunt of the body’s force coming down. More so, I feel it allowed my funky running form to come out to play, so to speak. A natural landing with a natural gait provided for a smooth motion which has apparently taken care of those minor little aches, pains, and twitches that have given me so much trouble.

Only 2 months ago the injury to my IT band syndrome was so profound that I literally could not run. I was in tears every step of the way.  I even noticed that long periods of standing at the OR table (I am a surgical PA) which I do for 4-8 hours a day, caused me excruciating pain.  My medical knowledge is enough to do more harm then good.   I know a bit about medicine and feared being told by a specialist that I would need knee surgery.  Hence, I simply didn’t go to get evaluated.  Instead I knew there was another way.  No better option than to re-evaluate my support system that would be my means to therapy.  I started wearing the Hoka One One Challenger ATR and started doing physical therapy exercises to strengthen muscles that became weak while I was over compensating for my IT band syndrome issues.  It was apparent in less than a few weeks that this shoe had enabled my  recovery and thus revolutionized my ability to run again.  Initially I was ever the sceptic.  No way a shoe could make that big of a difference.

After several weeks of running on the Hoka One One Challenger ATR and doing my PT exercises, I felt confident enough to take these out for my longer runs which have now included a 14 and 16 miler. Again, the tiredness of the legs towards the end is what is bound to happen, but I honestly did feel like I still had some bounce in my step for a strong finish.  More importantly, I was back out there doing my long runs and enjoying them injury free.  Not at all where I thought I would be only a short 2 months ago when I was in such pain. 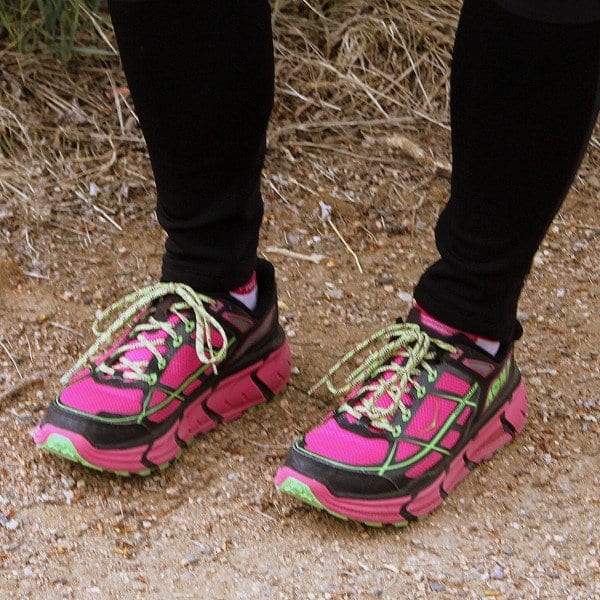 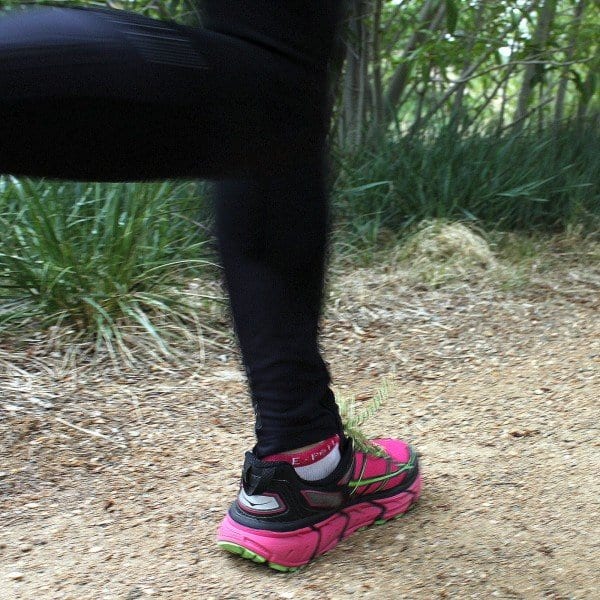 Hoka One One gets pretty creative with their color schemes and naming, but I like the look of mine; the Beetroot Purple/Jasmine. For the Women’s line they also have Astral Aura/Flame, Coriscan Blue/Acid, and Grey/Fushia. Checking them out on their website might be better to get a good idea of how they look: 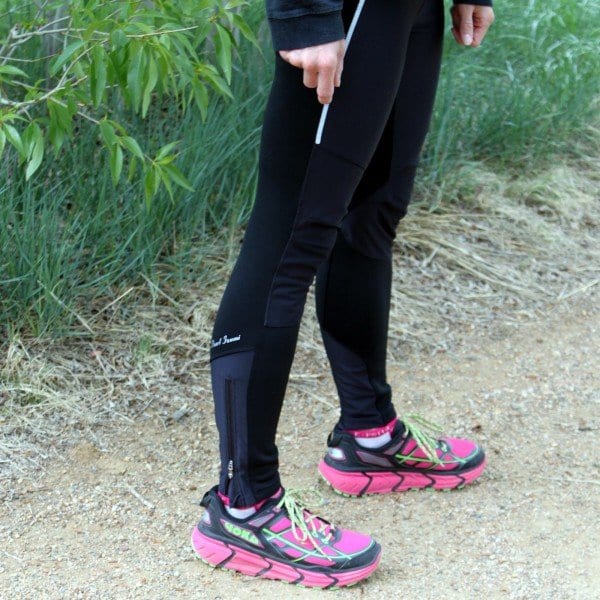 Final Thoughts for the Hoka One One Challenger ATR

With over 100 miles in my Hoka One One Challenger ATR shoes, I have seen an improvement in my knee pain. I am not giving complete credit to my shoes as I have been strengthening and stretching to aid in my rehabilitation. I have, however, started to have faith in these Challengers and in the Hoka product line. They are a contender and here to stay. It seems like fads in the running world come and go. Some of these trends do have merit, and although their popularity may wane, the inherent qualities do provide for a good running experience and performance. A lot of these things are still very personal. What may work for me, may not be suitable for you. In the end, trying something new does take some adjustments, but one thing is clear: the Hoka One One movement isn’t going anywhere. They make a quality product and these Hoka One One Challenger ATR shoes are a solid trail runner with great support, firm footing, and a comfortable upper.

For more information on the Challenger ATR and other Hoka footwear visit: www.hoka.com

Joanna is a life long runner, and has completed 16 marathons including 4 Bostons. Her latest notable accomplishment was finishing the Boulder Ironman. Having moved to Colorado 5 years ago, Joanna is now on a quest to run up and summit all of Colorado's 14,000 foot peaks. In her "spare" time, she loves to travel with her husband and two little girls. Having been to 43 of the 50 states and 5 countries.